Female genital cutting (FGC), also known as female genital mutilation and female circumcision, has been studied extensively since the 1979 Hosken Report raised awareness of the practice. However, in spite of greater knowledge about the beliefs behind FGC and its medical consequences, the reason for its persistence remains elusive. Why are 2-3 million families every year choosing to have their daughters’ genitals cut in an unnecessary, painful and risky procedure? With a better understanding of why FGC behaviour is resistant to change, policy work can be targeted more effectively.
Janet Howard
University of Bristol
Follow
Like Liked by Ben Johnson

This research came about due to our interest in ‘harmful cultural practices’ (HCP). This is a commonly-used term to group together some diverse practices which typically a) are culturally acquired behaviours which are widespread in certain communities, b) cause immediate or long term negative health consequences and c) are often imposed on individuals by their relatives. Examples include early and forced marriage, breast ironing, uvula removal and female genital cutting (FGC)

It is hard to understand why a practice that causes harm to others is being perpetuated, and HCPs are a challenge to explain. Because of the negative health consequences caused by HCPs, their eradication is a priority on the international development agenda, and FGC is the highest priority.

FGC is a very diverse practice and in the 29 countries where it is found it varies in terms of the age at which girls are cut, the level of ceremony involved, the severity of cutting, whether it is done privately or publicly, and the reasons why people believe it is important (tradition, religion, beliefs about female ‘virtue’, social acceptance and so on).

We used ideas generated by evolutionary biology to understand the persistence of FGC, which potentially could be applied to all these diverse forms of FGC. This approach will be familiar to readers of Nature Ecology & Evolution, but possibly not to a wider audience. Evolutionary ecologists assume that individuals adopt context-dependent behaviours which increase their evolutionary fitness (their genetic contribution to future generations), for example behaviours which help their offspring to survive and reproduce. This is well established in animal behaviour, and has been applied successfully to human behaviour in an increasing number of studies. Accordingly, the starting premise of our study was to test whether FGC behaviour enhances evolutionary fitness in the contexts in which it is found.

We combined this with ideas from cultural evolution about how cultural behaviours spread between individuals and through populations. This has been a really exciting opportunity to draw on theory from two different evolutionary disciplines. It is predicted that many forms of social learning may be adaptive in an evolutionary sense, and that people tend to copy, adopt or learn behaviours that will enhance their fitness. In our study we tested the fitness consequences of frequency-dependent social learning, where behaviours are copied in proportion to how common they are in a relevant social group.

As we used freely available secondary datasets for our modelling and analysis, we had no issues with field sites or data collection. Instead, the challenge we face is in communicating our results. The specific meaning of fitness in this evolutionary context is potentially confusing as it sounds like health or wellbeing, and there is a risk that our discussion about ‘fitness benefits’ being associated with FGC behaviour may be misinterpreted to mean we are saying there is a health benefit associated with FGC (we are not). Likewise, the proposal that FGC could be adaptive, or that the benefits could outweigh the costs in any context is counterintuitive. It is easy to accept that more obviously adaptive behaviours in humans can result in evolutionary fitness benefits (foraging efficiency, social cooperation, grandparental care), but the idea that a behaviour which cause physical harm could have a similar net effect is more challenging.

If these challenges can be overcome we believe that this approach has great potential. We hope that our findings may be able to contribute towards FGC eradication programmes (these are outlined in the paper) so that cultural-evolutionary forces can be harnessed to drive its abandonment.

Katherine Wander's accompanying article puts our research into context and discusses the findings and implications in greater depth http://www.nature.com/articles/s41559-017-0079

Poster credit: This shows an anti-FGC campaign poster on a street in Mali. The slogan translates as “Girl's bodies are sacred, leave girls uncut”. Permission to use this photo was granted by 28 Too Many, it comes from their Mali report. 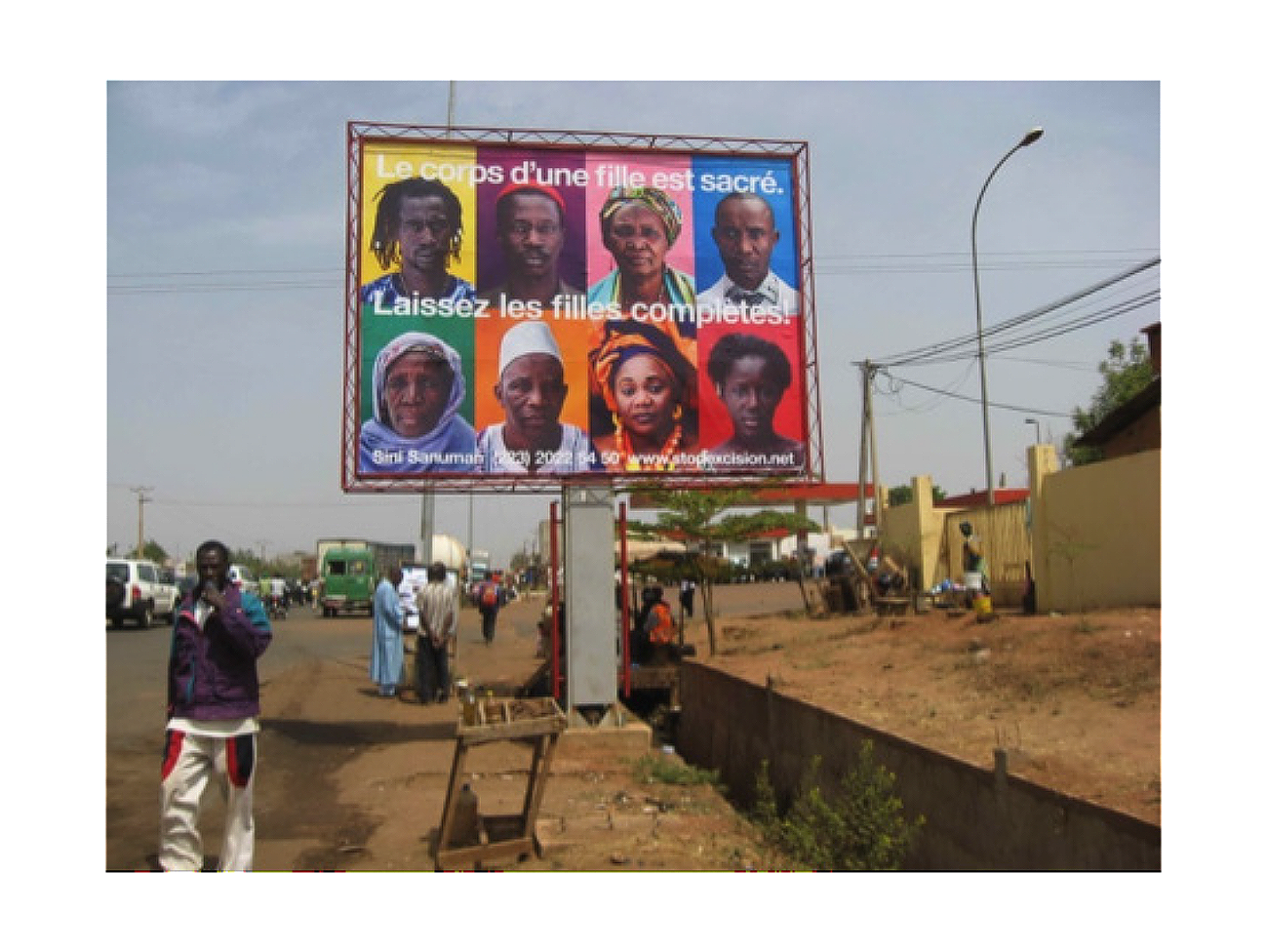 Female genital cutting (FGC), also known as female genital mutilation and female circumcision, has been studied extensively since the 1979 Hosken Report raised awareness of the practice. However, in spite of greater knowledge about the beliefs behind FGC and its medical consequences, the reason for its persistence remains elusive. Why are 2-3 million families every year choosing to have their daughters’ genitals cut in an unnecessary, painful and risky procedure? With a better understanding of why FGC behaviour is resistant to change, policy work can be targeted more effectively.