Nature Ecology and Evolution celebrates Earth Day with a selection of its own research papers and opinion pieces on various topics related to human impacts on ecosystems.
Vera Domingues
Senior Editor, Springer Nature
Follow
Like Liked by Patrick Goymer and 2 others
0

Our selection covers several facets of human impact on ecosystems: biodiversity loss, pollution, conservation, landscape use and exploitation of natural resources; with focus on terrestrial, freshwater and marine realms.

In this Comment, Elena Bennett argues it is time to move on from a narrow focus on food production and its impact on biodiversity to a broad view of all aspects of human well-being and how ecosystem services can secure them.

Biodiversity legislation is a powerful tool to stop human actions that affect the ecological integrity of the planet. However, politicians often use tactics to render environmental legislation less effective. Chapron et al. calls for an active role of conservation scientists in environmental litigation and political lobbying.

Jamieson et al. report significant levels of persistent organic pollutants in amphipod fauna from two of the deepest ocean trenches, the Mariana Trench in the North Pacific, and the Kermadec Trench in the South Pacific. These high levels of persistent organic pollutants reveal bioaccumulation of anthropogenic contamination in these remote habitats.

Identifying the relative importance of the main drivers of changes in species abundance over time is challenging. Bowler et al. estimate the relative strengths of climate change, land-use change, pollution and exploitation driving abundance trends in more than a thousand terrestrial, freshwater and marine populations across Europe. They find a consistent impact of temperature on terrestrial communities, but variable impacts on freshwater and marine realms.

Marine protected areas are designed to conserve biodiversity and are designed to include a broad taxonomic breath. However, they typically do not account for the conservation status of species and as a consequence threatened species are often outside protected areas. Davidson & Dulvy use hotspot analysis, an approach that focuses on threatened and endemic species, to identify regions that require conservation action to preserve sharks, rays and chimaeras. They suggest reconfiguration of marine protect areas and identify nations that need targeted action to reconcile fisheries and conservation.

Evaluating the impact of humans on natural communities requires a good understanding of changes of biodiversity over time. Valente et al. take advantage of the good fossil record of Caribbean bats and combine it with data on extant bats to model diversity dynamics in these islands. They show that while species richness has reached equilibrium in the past, the equilibrium was severely disturbed by humans: anthropogenic activity caused extinction of a third of island lineages.

Title photo is by vincent desjardin and is reproduced with no change. CC BY 2.0

Vera Domingues
Senior Editor, Springer Nature
Follow
Vera joined Nature as a locum Associate Editor in 2012, handling the fields of ecology and evolution, and in 2013 she moved to Nature Communications, where she managed a team of editors. She joined the launch team of Nature Ecology & Evolution in 2016. Vera obtained her PhD from the University of Azores, studying the evolution of coastal fish in the Atlantic and Mediterranean, and collaborated with the Eco-Ethology Research Unit at ISPA in Lisbon and the University of California at Santa Cruz for her dissertation. Her postdoctoral work took her to Harvard University where she investigated the genomics and evolution of adaptive coloration in wild mice. 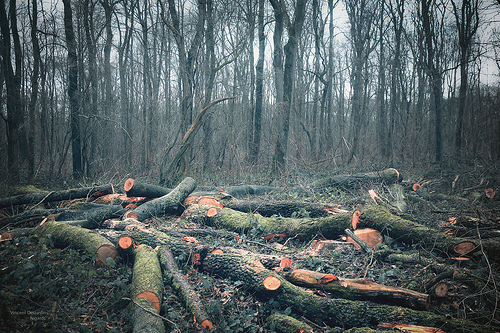 Nature Ecology and Evolution celebrates Earth Day with a selection of its own research papers and opinion pieces on various topics related to human impacts on ecosystems.