Reproductive Costs on Survival are Optional in Male Fruit Flies

Fitness trade-offs such as costs of reproduction are an integral component of evolutionary theory, and a common trade-off is that increased reproduction decreases longevity. Our lab's interest in reproductive costs stems from its potential to reveal conserved mechanisms that regulate the aging process. When we were in the planning stage of this study, our goal was to explain a recent phenotype we observed where the lifespan of fruit flies was decreased by exposure to pheromones of the opposite sex, and mating actually partially reversed this negative effect. While we were obviously interested in the molecular mechanisms of these phenotypes, we also sought to better understand why this might occur from a conceptual level. Our first thought from this perspective was that the negative effects of pheromones in the absence of mating may be due to a mismatch between expectation and reality. In this line of thought, mating partially rescued the negative effects of pheromones on longevity because the availability of mating opportunities accurately reflected the concentration of pheromones in the environment. We liked this theory, particularly given the known role of NPF as a reward molecule and studies from other labs at the time that demonstrated other “rewards” such as alcohol could take the place of copulation (Shohat-Ophir et al, 2012).

Based on this hypothesis, we predicted that mating in the absence of pheromones would also have a negative consequence on longevity, as again there would be a mismatch between expectation (pheromone perception) and reality (mate availability). However, as we demonstrate in our article, this is not the case: mating in the absence of pheromone perception has a negligible effect on longevity. This instead suggested that mating itself was beneficial in the context of pheromone perception and had no effect in the absence of female pheromones. While we don’t attest to be experts in reproductive costs, we were quite surprised by this result, particularly given relatively minor differences we observed in offspring production (see picture below, vials that contained males and wild-type females are on the left, vials with males and females expressing male pheromones on the right with blue lines). We proceeded to identify specific neuropeptidergic and cellular signaling pathways responsible for how mating and pheromones alter longevity, suggesting the costs of reproduction on lifespan are highly regulated by the organism themselves. 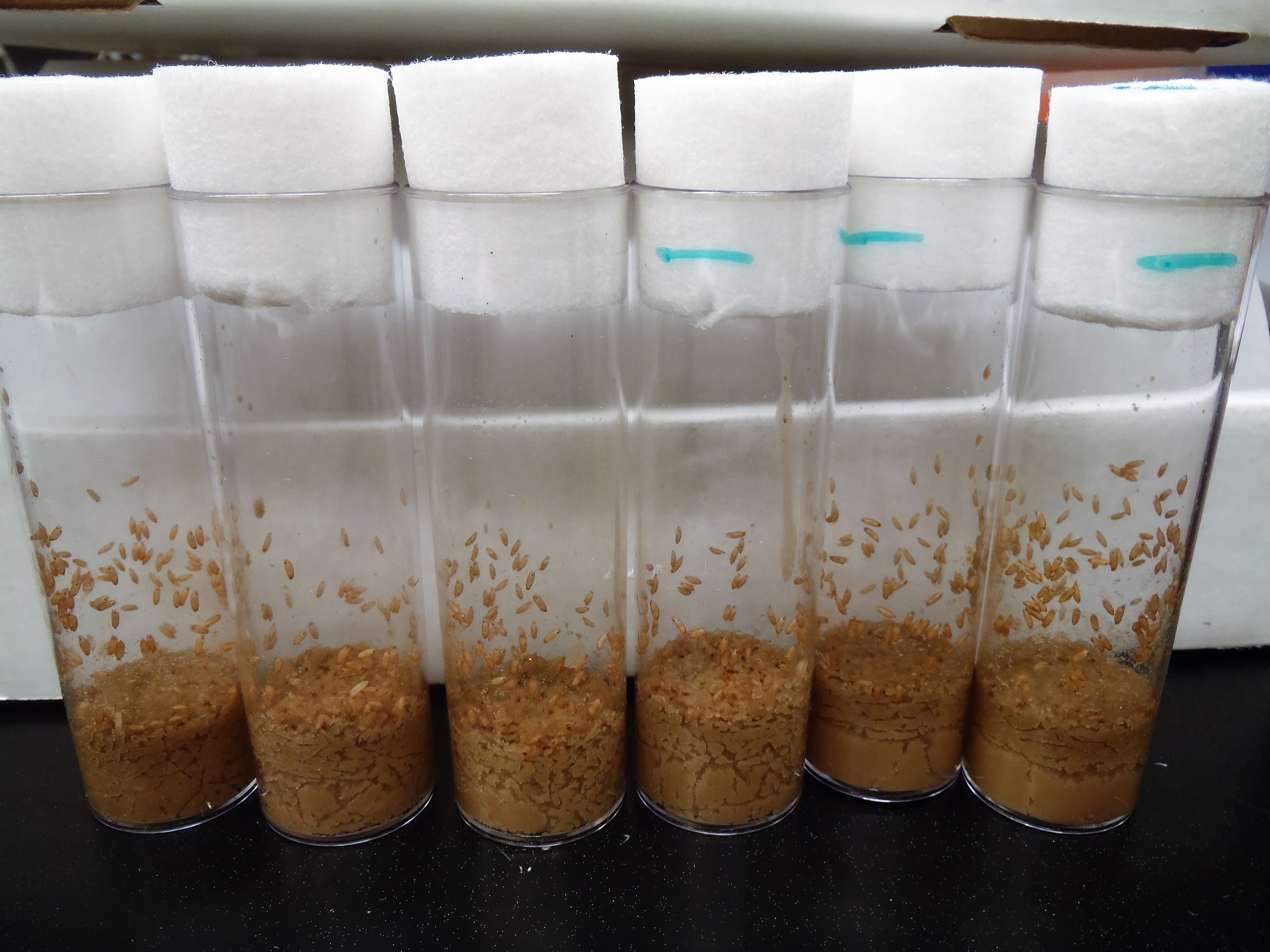 In light of the findings presented in our article, we had to reconsider our theory as to why pheromones and mating had opposing effects. Given that our initial overarching hypothesis of that the costs may result from a mismatch between perception and reality failed hypothesis testing, we have been considering other potential frameworks that could help us better understand their evolutionary origin as well as the implications for humans. One such framework is that of primitive emotions, where pheromones and mating are inducing opposing central emotional states which in turn alter the lifespan of the organism.

While the idea of emotions in fruit flies can feel silly, there is growing acceptance that primitive emotions may exist in lower organisms, and some groups are developing methods through which they can be identified and studied (Anderson & Adolphs, 2014). When we consider an emotion such as anxiety in a human, it is ultimately a neurologic state typically brought on by a specific stimuli (either internal or external), causes changes in our behavior and physiology (e.g., increased heart rate, sweating), and also creates the “feeling” that we perceive. Absent the subjective feeling, primitive emotions should have similar characteristics. Our work suggests that, at least for male Drosophila, reproductive costs on lifespan are regulated by neuropeptidergic signaling and cause changes in the neurometabolome in response to external stimuli (i.e., pheromones and mating). These stimuli also affect other physiologic processes, such as fat metabolism and stress resistance, and there is a large body of work studying the behavioral changes caused by pheromones and mating. 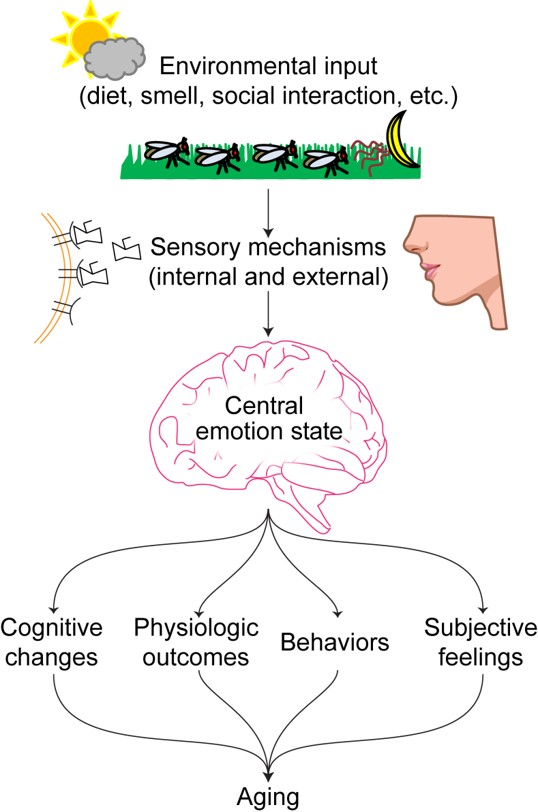 Beyond the general appeal of the (admittedly unproven) concept of emotions driving health and aging, this framework provides an avenue for hypothesis generation and testing, both within Drosophila as well as when translating this work to other species. For example, a key property of emotions is that they are fluid and temporary in nature, and in another recent article we determined that the consequences of pheromone exposure on mortality were indeed reversible if the exposure is removed. More broadly, it has led us to consider other potential stressors and how they may impact aging physiology and behavior in flies. In the future, we hope that these kinds of studies will encourage researchers to investigate whether emotions in all forms may impact healthy aging as well as the conserved nature of the building blocks of emotions.