The paper in Scientific Reports is here: http://go.nature.com/2eJZx6v

Anatomical network analysis is a framework for quantitatively characterizing the topological organization of anatomical structures, thus providing a way to compare structural integration and modularity among species. Here we apply this approach to study the macroevolution of the forelimb in primates, a structure whose proportions and functions vary widely within this group. We analyzed musculoskeletal network models in 22 genera, including members of all major extant primate groups and three outgroup taxa, after an extensive literature survey and dissections. The modules of the proximal limb are largely similar among taxa, but those of the distal limb show substantial variation. Some network parameters are similar within phylogenetic groups (e.g., non-primates, strepsirrhines, New World monkeys, and hominoids). Reorganization of the modules in the hominoid hand compared to other primates may relate to functional changes such as coordination of individual digit movements, increased pronation/supination, and knuckle-walking. Surprisingly, humans are one of the few taxa we studied in which the thumb musculoskeletal structures do not form an independent anatomical module. This difference may be caused by the loss in humans of some intrinsic muscles associated with the digits or the acquisition of additional muscles that integrate the thumb more closely with surrounding structures.

Book: evolution and development of muscles of all chordates

First use of anatomical networks to study fin-limb transition 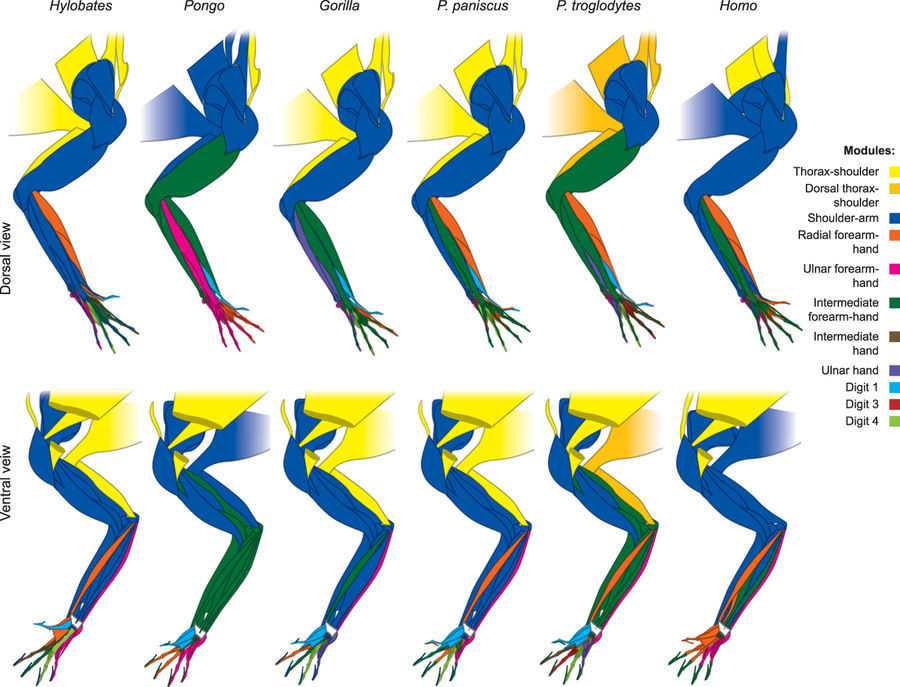