The paper in Nature Ecology & Evolution is here: http://go.nature.com/2jIMlAK

Ecologists know that biodiversity (diversity of species, genes, and phenotypes) makes ecosystems both interesting and functional. Evolutionary biologists know that same diversity evolves in response to ecological selection pressures – food, habitat, species interactions. The challenge is to unite these two halves of an eco-evolutionary “life cycle” in ways that really capture their interactions in a dynamic way. We can’t just think about evolutionary processes that have produced static ecological contrasts among species, and we can’t just think about static ecological contrasts that explain evolutionary divergence. Somehow, we have to figure out how and when to study these pieces together. How they constantly impact each other, and when this matters.

The motivation to do this starts with mounting evidence that evolution happens faster than we might have thought. On top of that, humans are moving species around and modifying habitats – introducing new combinations of genetic and phenotypic material to evolve in new habitats. In Switzerland, records show that humans introduced threespine sticklebacks to Lake Geneva and Lake Constance, seeding each of these large lakes with a separate evolutionary lineage from southwestern or northern Europe, respectively. Under 150 years later, populations of threespine sticklebacks are showing up in water bodies across the country, and genetic evidence shows they are often composed of hybrids with contributions from both of these lineages.

Given this contemporary shuffling and hybridization of lineages into a wide range of ecological contexts, we set out to explore the interplay between phenotypic diversity and ecological conditions, and how this might matter for future evolutionary trajectories. This is easier to do in systems that you can set up in the lab and run for many generations in the space of a year (e.g., algae and rotifers), which have generated some really inspiring and foundational work in eco-evolutionary dynamics. Sticklebacks reproduce more quickly than a lot of vertebrates (after 1-2 years) but still much more slowly than algae! They also eat a diversity of things - both benthic and pelagic invertebrates varying in their size, generation times, nutritional value, and escape strategies. And they find these prey in a diversity of habitats, from open water to densely vegetated shorelines and streams.

Luckily, Switzerland is a terrific place to get big ideas funded. Eawag, the Swiss Federal Institute of Aquatic Science and Technology, includes the Center for Ecology, Evolution, and Biogeochemistry in Kastanienbaum, which brings together folks who know about aquatic ecosystems from a variety of perspectives, and folks who know a lot about fish evolution. With the assistance of several really skilled technicians, undergrads, interns, graduate students, and post-docs, we set up replicated 1000 l mesocosms and stocked them with a whole range of prey drawn from three different lakes (Constance, Geneva, and Lucerne).

The intention here was to start out with a diverse ecological template. Sticklebacks are fish with a pretty wide habitat niche – they are widespread in the coastal regions of northern oceans, and have at times accounted for substantial proportions of the fish community in large lakes, but also live in streams and small ponds. After letting the "replicate ecosystems" get off to a good start (plants sprouting up from the sediment, zooplankton communities developing), we were ready to explore both the impacts that fish have on ecosystems, and the impacts that ecosystems have on fish.

For the first part of the experiment, we introduced wild-caught fish from either one of the two evolutionary lineages (at two densities), and let them do their thing for several weeks. We then took them out and measured a whole bunch of variables they might have modified (prey, water chemistry, productivity, plant growth). At this point, we could determine that the different lineages actually had pretty divergent impacts on aquatic ecosystems, including both habitat and prey structure.

After we took out all the adults and measured their effects on the mesocosm ecosystems, it was time to make use of all the work that had been going on behind the scenes, raising thousands of juvenile fish in the lab. To measure selection on juvenile phenotypes as a result of ecosystem modification by adults, we introduced 99 juveniles to each mesocosm in an equal mixture of Constance juveniles, Geneva juveniles, and F1 hybrid juveniles.

After the juveniles had several weeks in the mesocosms to feed and grow, we fished them all out (again with a lot of help - it's pretty easy to get volunteers to take a break from work to go fishing in the lab’s backyard, even if your catch is way too small and spiny to eat). After identifying all the juveniles by genotyping, we found three clear results:

For example, we found that adult fish removed prey size-classes potentially most beneficial to juveniles with the same phenotype. This fluctuating selection imposed by resource availability, which should favor the less abundant of the lineages from one generation to the next, could promote phenotypic diversity in a mixed population or the coexistence of separate populations representing the two founding lineages.

So what do these results in an artificial mesocosm array mean for the evolution and ecology of stickleback populations across Switzerland? One of the most exciting ways to think about these results is that they give us some pretty clear hypotheses about what we might find when sampling a range of small and recently-colonized water bodies that actually exist in the wild. When you set up mesocosms with an abundance and diversity of plants and animals, fish phenotype (and underlying genotype) can have a big impact, generating dynamic selection pressures over time. How important will this be overlain on extrinsic environmental variation? Armed with hypotheses generated from experiments, targeted field surveys could shed some light. For example, in addition to variable selection on the two lineages, we found that hybrids did particularly well in conditions where juveniles from both lineages had low survival. This suggests that they might be more likely to increase in frequency in resource-poor or otherwise stressful conditions – a clear prediction to test in the field. 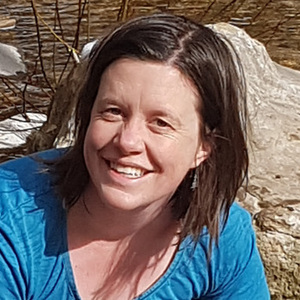