Nutrient co-limitation in the ocean

New study shows that multiple nutrients must be supplied to stimulate phytoplankton growth over 1000s of kilometres of ocean.

The paper in Nature is here: http://go.nature.com/2hzoP5I

Phytoplankton—unicellular photosynthetic microbes—are ubiquitous throughout the sunlit portion of the world’s oceans. For organisms invisible to the naked eye, they make an enormous contribution to total primary production on Earth, probably approaching 50%.

Spatially, phytoplankton abundance in the surface ocean varies by orders of magnitude. This heterogeneity is in large part due to variations in nutrient supply. Experiments conducted to date have suggested that the main nutrients limiting phytoplankton growth in the modern ocean are one of either biologically accessible nitrogen, or iron. But simultaneously low concentrations of these and other nutrients have been measured over large extents of the open ocean, raising the question: are phytoplankton in these waters limited by only one nutrient?

To test this question I participated in a research cruise that spanned the extremely productive West African coastline through to the low productivity South Atlantic gyre. The cruise track would transition though extents of ocean where multiple nutrients are drawn down to low concentrations simultaneously, therefore providing the perfect opportunity to directly test for multi-nutrient limitation.

Our cruise transect through the South East Atlantic, plotted on a background of satellite-derived chlorophyll-a concentrations (an average for December 2015). The white dots indicate the locations of the eleven bioassay experiments.

Throughout the cruise I was setting up nutrient addition bioassay experiments. The idea behind these is quite simple—seawater is collected in 1-litre bottles and spiked with combinations of nutrients; I was adding nitrogen, iron, and cobalt in all possible combinations. The bottles were subsequently incubated in an environment simulating the light and temperatures of the upper ocean for two days. Then, the growth, physiological status, and changes in phytoplankton community structure were determined relative to parallel, untreated control bottles.

Checking the incubators in Namibia before setting off on our 5-week research cruise.

This all sounds simple, but the logistical challenges of conducting these are significant to say the least! One critical concern is keeping the collected and incubated seawater fastidiously clean: not just kept free of bits of visible dirt—that goes without saying—but all plastic surfaces in any contact with the seawater must be rigorously acid soaked and rinsed with ultra pure deionised water to leach out any trace elements that could be released into the seawater during the incubation.

Also, the phytoplankton samples are very delicate and sensitive to light and temperature, so special care needs to be taken when probing their physiology, preserving them with a fixative, or filtering and rapidly freezing them for future analyses back on land. Keeping up this attention to detail for thousands of samples for more than five weeks on a rocking ship was tough—but luckily I was getting some data ‘real time’—great for keeping up the motivation!

The FS Meteor sailing through the South Atlantic. The equipment being towed on the left is a water sampler, which was connected to a ‘clean air’ laboratory on the deck of the ship. This was used to collect seawater for the experiments without contamination by dust or dirt particles.

Analysing the samples and data back on land showed that the effort was paying off: we saw clear shifts in nutrient limitation regimes, from limitation by iron through to limitation by nitrogen, with 1000s of kilometres of waters in-between that were ‘co-limited’ by both nitrogen and iron. Furthermore, we discovered that supplying nitrogen plus iron in these co-limited waters was not enough to fully stimulate phytoplankton growth—adding the micronutrient cobalt too was necessary, a requirement that could also be met in some experiments by adding cobalt-containing vitamin B12.

Back in the lab and analysing seawater samples for trace element concentrations.

We found the limitation regimes detected in the experiments could be reconciled with the measured seawater nutrient concentrations. This was significant as it indicated the potential for making larger scale predictions. Seawater nutrient data, once scarce, are now becoming increasingly available through programmes like GEOTRACES (the coordinated international effort to map trace element concentrations in the ocean).

Finally, we found that a complex, state of the art biogeochemical ocean model suggested a much smaller extent of nutrient co-limitation than our observations indicated. We attributed this to restricted microbial and nutrient diversity in the model. Our findings therefore have implications for how such models are constructed if they are to represent nutrient co-limitation in the ocean and accurately project changes in ocean productivity in the future.

Cruise participants on the German GEOTRACES expedition in the South Atlantic (as some of the accessories suggest, we had Christmas on the ship that year). 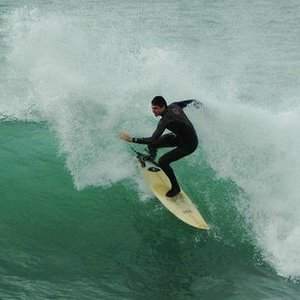