How species act when they are at the edge

Most vertebrate species in fragmented forested landscapes show abundance responses to forest edges: some are winners and some are losers

Our Nature paper can be found here: http://go.nature.com/2h5vUO2

In 2013, we - and by this I mean myself (as an ecologist), Vero (as a mathematician) and Rob (the one that employed us to look at fragmentation history effects on biodiversity) - started compiling species abundance data collected in plots from fragmented forested landscapes worldwide. We called this excitingly the BIOFRAG project, and originally thought to use consistent but standard methodology to analyse those data in a coherent way. The idea was to test whether this consistent approach would allow us to detect general patterns in the way species respond to fragmentation. Whilst we were primarily interested in the edge effects emanating from boundaries between forest and non-forest habitats (not only because Rob likes to refer to himself as an edge person), we were not averse to testing for impacts of other metrics such as fragment size and connectedness between fragments.

We soon realised that this method wouldn't give us sufficient insight into what was happening to biodiversity fragmented landscapes. In fact, as our mathematician on the team pronounced, we used a set of metrics that was too flawed to deal with the advancements made in our conceptual understanding of fragmentation and edge effects: We knew that the land use surrounding forest fragments, i.e. the forest-matrix contrast), was important for what was happening to biodiversity in the landscape overall but also to biodiversity within the forests. We also knew that we don't just have a 'distance to the nearest edge' effect but rather an effect resulting from multiple edges. We also knew that species don't actually perceive landscapes as forest versus non-forest but rather see continuous variations in suitable habitats. So not only did Vero have the nerve to recomputed improved versions of landscape metrics calculated by programs such as Fragstat, but she also dared to then throw those over board and come up with a completely new set of two key metrics, which did all the things we wanted it to do. The first metric is Edge Influence, which we calculate as measure for landscape configuration. This is a bounded spatial metric that quantifies local variations in tree cover percentage and thus accounts for effects of multiple edges and edge contrast.  The second metric is Edge Sensitivity, calculated as the proportion of the Edge Influence range avoided by the species as a biological meaningful metric of changes in abundance.

But that was not quite enough. We had to compute those edge sensitivities separately for species preferring different types of habitats in the fragmented landscape. Because obviously, some of them will require the lush interior of a dense forest. Others, are actually quite happily seeking out edge habitats and then there were some species avoiding tree cover habitats and edges altogether.

We subsequently used this new set of metrics and analysed all the vertebrates in our database, and we apologise to all insect fans out there for this bias. We found three main points of interests: (1) 85 per cent of the 1673 vertebrate species we analysed are being impacted by forest fragmentation and in particular edge effects. (2) Roughly half of them are losers: they need the dense forest core to survive and are being squeezed into ever smaller areas. This leads to some of them becoming endangered, such as the the Sunda pangolin. The other half are winners: they like conditions at the edges and are thriving. However, these species are not necessarily ones that benefit the local ecosystem. And (3) For the hundreds of species that we identified as being clearly dependent on intact forest core areas – that is forest which is at least 200-400m from the edge - these species were more likely to be listed as threatened already and they were more likely to disappear in landscapes that encompass only a small proportion of intact forest.

Which brings me nicely to our story picture, featuring the Sunda pangolin (Manis javanica) (copyright Chi’en C. Lee). This species depends on intact forest core areas – that is forest which is at least 200-400m from the edge. This would be an example of a species losing out when forests become fragmented. The species is highly sensitive to the changing habitat and therefore more likely to disappear in landscapes that encompass only a small proportion of intact forest. 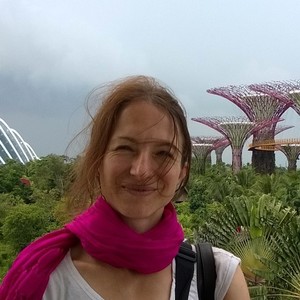