Do small-prey-based diets increase vulnerability to environmental fluctuations for carnivores relying on them?

Our Nature Ecology and Evolution paper is here: http://go.nature.com/2zNOpuL

Nature documentaries showing the hunting prowess of predators are fascinating to watch, but generally paint a rather inaccurate picture. The average predator's existence is far more tenuous than these striking vignettes of successful hunts suggest: in nature, prey are very often hard to find, and when found, to hunt and overcome. Failure to catch a single meal is never as great as the loss of life for the prey, but starvation beckons the predator if too many hunts go amiss. Being a mammalian predator, or "carnivore", is particularly challenging because being (and remaining!) warm-blooded requires a constant "burning” of energy. And life gets more challenging if you are a small carnivore, as small size comes with a higher metabolic rate.

Thus, it is perhaps not surprising that, as a highly diverse group of species, carnivore hunting strategies vary with body size. Smaller-bodied species such as weasels and mongooses, often feed on prey which are tiny compared to themselves, while larger species (wolves, lions and tigers) hunt prey similar to or larger than their own body size. Indeed, these latter species are often described as "hyper-carnivores” for their adaptations for strength and toughness to cope with the killing of such powerful prey.

In our study, we focused on the proportion of time an animal spends foraging on a daily basis ("activity time"). Whether body size can predict activity time, which determines the health of the individual and as a result, that of the species' population, is a fundamental problem that has hitherto been limited by availability of animal tracking data. We developed a mathematical model that predicts the daily activity time of a predator as a function of it body size, and confront it with tracking data on terrestrial carnivores worldwide, from small species such as weasels to some of the largest such as tigers.

Different species vary widely in how much time they are active throughout the day, from those constantly foraging for food to some that idle for most of their day. Intuitively, given the high metabolic rate of small mammals, one would expect the former group to be made up of small species and the latter of larger species, so that activity time decreases as carnivores get larger. What our results showed, instead, is that carnivores actually *increase* the amount of time they spend active as body size grows until, upon reaching a certain threshold body weight of between about 1-10 kg, after which they switch to more rewarding foraging strategies which allow them to spend more time resting. Our model suggests that this phenomenon is a result of the fact that such medium-sized predators are forced to search for food for longer periods of time on a daily basis because they tend to feed on prey that are far too small compared to their own size. Prey too much smaller than a predator are hard to find and catch, and therefore do not easily satisfy the predator's energy needs (that is, they provide insufficient “bang for the buck”). Examples of such medium sized carnivores include the Malay Civet (Viverra tangalunga), Iriomote Cat (Prionailurus iriomotensis), Leopard Cat (Prionailurus bengalensis), Crab-eating Fox (Cerdocyon thuos), and the Eurasian Fox (Vulpes vulpes). These findings provide new methods for predicting the vulnerability of animals to environmental changes resulting from habitat loss and climate change.

Yet, while certain intermediate-sized species that cannot adapt to a changing environment and prey availability may be threatened, others that are both highly-adapted to specific hunting techniques and able to eat small prey opportunistically (thus both specialist and generalist), are likely to be very successful. Examples of such species include the humble Eurasian Fox (V. vulpes) and the Malay Civet (V. tangalunga).

The road to getting this paper published was a long one and, as it often happens, it began almost entirely out of random chance back in 2013 when I was a Master's student in Ecology, Evolution and Conservation at the Silwood Park Campus of Imperial College London. I was on an escalator in the London underground on my way down to the tube platform, when I checked my phone's email app to find a message from Chris Carbone --- who had an idea for a research project I might be interested in. After chatting with Chris, I was on board with the idea, and set out to find a supervisor within Imperial. After hearing my research plans, the Masters course convenor suggested I approach Samraat Pawar, who had just joined the Faculty in the Department of Life Sciences at Imperial College. Thus began a four-year collaboration that resulted in this paper!

We soon realized that, in order to tackle this question of whether activity really declined with body weight, we would need a mathematical model to first test the general intuition of this relationship being more complex than usually assumed. In turn, this model would need to be coupled with data on both the energy needs and activity times of a suitably large and varied group of mammal species spanning a wide range of body sizes. While some had taken stabs at this in earlier papers using different approaches, none had tried to tease out the physiological constraints underlying mammal foraging practices, nor had they worked on more than one species at the time.

So Samraat set out to develop our own model, rooting it into metabolic theory. At the same time, I began assembling a database of carnivore activity patterns from published tracking studies. This was my first, real taste of how tricky and delicate is the process of asking researchers access to their hard-earned data. Many times, lengthy email discussions with a paper's authors did not produce the hoped-for result, or ended abruptly in complete and utter silence from the other party, or even gained me a short, harsh reply. Yet, there were also little gems, like the U.S.-based professor who replied to my data request by shipping me a printed copy of the journal's issue in which the paper I was interested in had been published three decades ago. It was a time of growth, both academic and personal, and it helped me immensely in my career ever since.

The other big hurdle we encountered while working on this paper was the strong bias present in the literature towards large, charismatic species. Obtaining data on species smaller than a European Fox was a veritable challenge, whith very few and far between records --- as it can be noticed from the left portion of the graph in Fig. 2b. This knowledge gap became apparent to us as we went along: as much as we scoured the literature for small carnivores' data, these were just not there. This was not only infuriating, at times, but als deeply worrying: how could we be certain of our results at the lower end of the body size spectrum, with just such few data poins. Eventually, through the help of many fellow researchers, we were able to assemble enough data points for these species. A data gap, however, still remains at the lowest end of the body size range --- it would have been ideal if we could have found data on an even wider range of species, especially for civets, genets and mongooses, and thus have better representation of small body sizes.

In conclusion, working and witnessing this project grow from simple research project to full-fledged scientific publication was an exciting and amazing experience. Early on, I developed a strong attachment to the paper, so much so that seeing it published today feels akin to watching a young bird leave the nest for the first time. We hope that conservationist and managers, as well as other researchers, will find this model a useful addition to the toolbox, and we cannot wait to see what discussions will rise around it. By highlighting the strong bias present in the literature towards large, carismatic mammals, we also hope this article will prompt fellow researchers to dedicate more attention to smaller, more elusive and less known species.

Vulpes vulpes by Matteo Rizzuto, own work - CC BY SA 4.0. 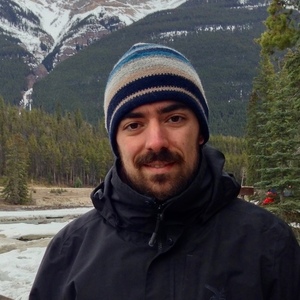