Can a beetle with 12 extra wings help explore the evolutionary origin of insect wings?

By studying ectopic wings in the beetle abdomen, we have revealed two distinct lineages of tissues contributing to wing formation outside of the thorax. This finding helps further resolve the evolutionary origin of the bona fide wings found in the thorax.
David Linz
Postdoc, Indiana University
Follow
Like Liked by Patrick Goymer and 2 others
0

Every graduate student is told about the value of side projects. You just never know when some unexpected data might transform into something exciting.

During my third year as a PhD student in Dr. Yoshi Tomoyasu’s lab at Miami University in Oxford, Ohio (yes, Ohio), I was given the task of learning bioinformatics for an RNAseq project in Tribolium, a small red flour beetle that has become a powerful insect model organism.

To escape the monotonous drone of deciphering command line, I started exploring a side project that, amongst other things, required knocking down abdominal Hox genes in the beetle. The original goal of the project wasn’t working, but something strange kept happening when I knocked down a Hox gene called abdA in a line of beetles that uses a green fluorescent protein (GFP) to mark tissues with wing identity.

These glowing “blobs” of cells throughout the abdomen were, confusingly, little pockets of wing tissue where they shouldn’t be. I must say, the lens of hindsight is always clear, but at the time we didn’t realize it would take another year of thinking and experimentation before these data started to tell a story.

My scratch notes from circa 2013, thinking about insect wing origin and creating more questions than answers.

Insect wings are a textbook example of an evolutionary novelty, but somewhat paradoxically, the precise details underlying their origin have been hotly debated for over a century. From these debates, two opposing sides emerged. One side thought that leg-related tissues gave rise to wings, and the other side thought the dorsal body wall was the wing-origin tissue. A stalemate ensued. To resolve this long-standing question a new viewpoint was needed; enter evolutionary developmental biology (evo-devo). Using developmental approaches, evo-devo helped revive a third angle to the wing origin debate by demonstrating that perhaps both previous schools of thought were partially correct. In other words, a fusion of tissues from both dorsal body wall and leg-related structures contributed to the formation of wings. This idea is called the dual origin hypothesis. But if these two separate groups of cells are already fused to produce a wing, how can we test this dual origin hypothesis?

To do this we must return to the green blobs of cells I created in abdA RNAi beetles. What was a challenge to understand then, is now more clear. Those ectopic wing blobs are tissues that are serially homologous to wings in the abdomen (called gin-traps and first described as wing serial homologs by Ohde et el. 2013 [1]) and they are transforming, partially, into ectopic wings. We can thus use wing serial homologs on segments that are normally viewed as “wingless” segments to explore the transitional state of insect wings, reveal the tissues critical to their formation, and begin to unravel the evolutionary history of these flight structures. Accordingly, we used a variety of Hox knockdowns to explore these transformations. These experiments were frustratingly finicky. Transformations would be too strong or too weak. Animals would die before we could analyze them. I ended up injecting over a thousand animals and with each round I would wait patiently for that perfect moment. After many long days, and a few voodoo-like sacrifices to the experiment-gods we finally nailed the specific combination of dsRNA concentration and the right timing of injection to reveal the key transitional transformations. Here, in these animals, we could visually detect two separate groups of cells merging to form ectopic wings in the abdomen and these data provided strong additional support for the dual origin hypothesis.

The insect wing debate is far from over. The evo-devo community has restarted a discussion that was paralyzed for years and, perhaps, pushed the discussion in a direction that was previously difficult to conceive. Within the evo-devo perspective, caution must be taken when studying any one species, or even order, of insect. With this in mind, exploring a wider taxonomic breadth in our studies (for example see [2] and [3]) and adding perspectives outside of evo-devo (see [4] and [5]) will be critical for the future.

To conclude, insect wings are a famous, yet mysterious morphological novelty, and I wouldn’t have guessed that 5 years ago some green blobs on the abdomen of beetles could help contribute to resolving this longstanding biological conundrum. This project taught me the importance of perseverance, and cautious but careful observation, but most importantly it taught me the value of raw curiosity. I wanted so badly to understand what I was witnessing in the abdomen of Tribolium, so I pushed through the uncertainty. Repeatedly in science we witness things we don’t understand, it can be easy to fear the black box. This, however, is the very epitome of our field, and so long as we maintain our curiosity then perhaps that box will continue to grow ever smaller. 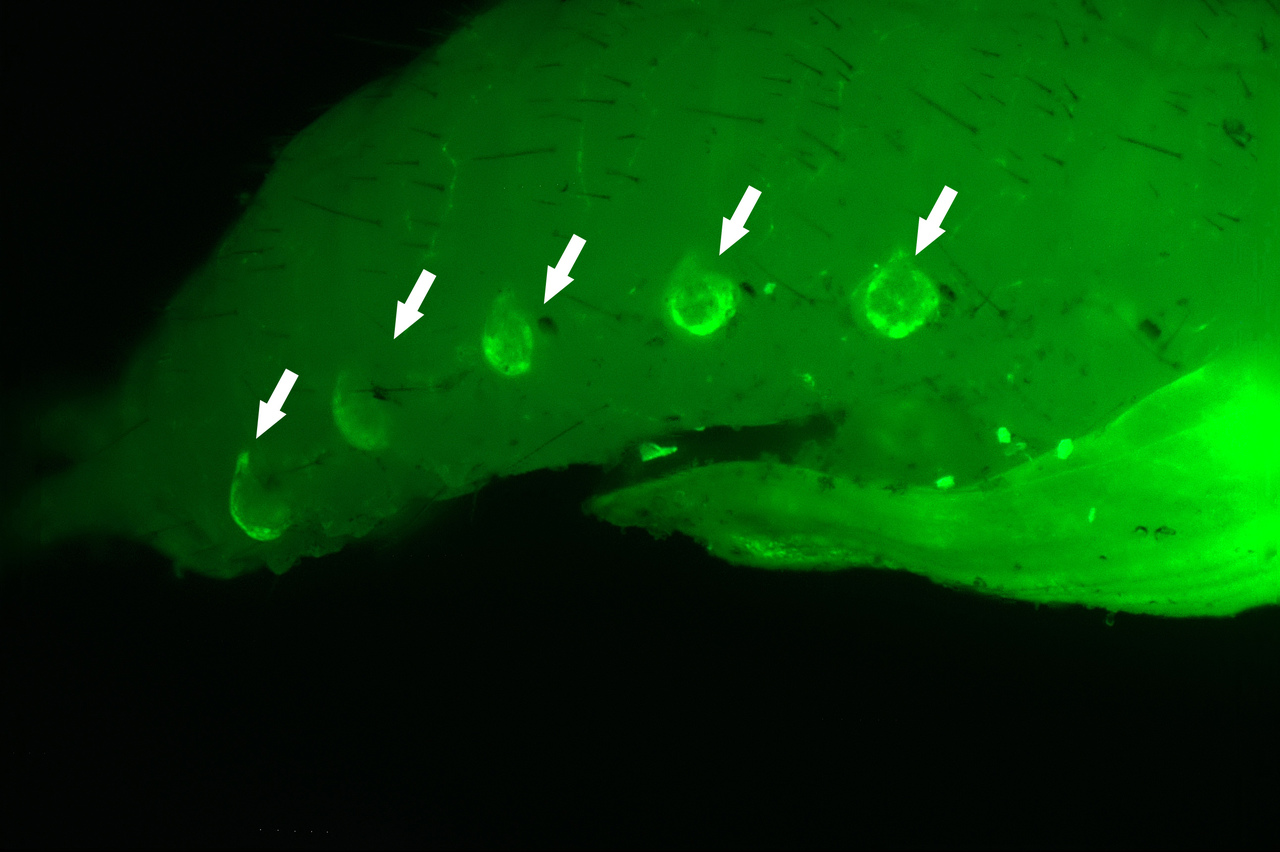 Can a beetle with 12 extra wings help explore the evolutionary origin of insect wings?

By studying ectopic wings in the beetle abdomen, we have revealed two distinct lineages of tissues contributing to wing formation outside of the thorax. This finding helps further resolve the evolutionary origin of the bona fide wings found in the thorax.