Seagrass ecosystems have been identified as natural carbon sinks whose conservation could serve as a strategy to mitigate carbon emissions. Seagrass ecosystems are, however, experiencing world-wide decline, raising concern to the potential for their sediment organic carbon stocks to be re-emitted to the atmosphere as carbon dioxide, fueling climate change. Indeed, warming with climate change, and particularly the increased frequency of marine heat waves forecasted, has been identified as a likely driver of a further acceleration of seagrass loss.
Ariane Arias-Ortiz
PhD student, Autonomous University of Barcelona (ICTA-UAB)
Follow
Like Liked by Patrick Goymer and 1 other
0

The paper in Nature Climate Change is here: http://go.nature.com/2DHd98W

Seagrass high primary production rates and capacity to sequester carbon dioxide (CO2) through photosynthesis, together with low rates of herbivory and slow decomposition of seagrass detritus, produce excess organic carbon (C) available for storage. The seagrass canopy decreases current velocity and dissipate wave energy thereby increasing the deposition of particles, which further enhances C accumulation in their sediments. The long-term permanence of the C stored in their sediments is ensured through the slow microbial remineralization rates of organic matter in the anoxic conditions beneath seagrass meadows. However, seagrass losses due to human- or climate change-induced disturbances are widespread, potentially resulting in sediment erosion and resuspension, and the remineralization of old soil organic matter to CO2.

Here at Institut de Ciència i Tecnologia Ambientals (ICTA-UAB), we use radiotracers to study environmental processes such as particle deposition and erosion. My PhD consists in applying these tracers to study C burial (and erosion) in vegetated coastal sediments. Within the frame of the CSIRO’s Coastal Carbon Cluster, we started a strong collaboration with Oscar Serrano and Paul Lavery from the Centre for Marine Ecosystem Research at Edith Cowan University, to study C accumulation in seagrass sediments in Western Australia. My supervisor, Pere Masqué, liked it that much that he moved there.

Shark Bay, in Western Australia, hosts one of the largest (4,300 km2) seagrass meadows in the world, occupying between 0.7 and 2.4% of the world seagrass area. We know from previous research that seagrasses colonised Shark Bay's seafloor about 8,000 years ago and its continuous growth resulted in seafloor elevation and C sequestration, altering the seascape through the buildup of banks and sills. Its growth between the open ocean and the embayment restricted water circulation and led to a strong salinity gradient in the Bay, leading to the development of exceptional Stromatolite communities at the enclosed and hypersaline Hamelin pool.  There were many reasons to study seagrass meadows in Shark Bay, but one of them was its exceptional seagrass meadows and potential for C sequestration.

The field trip in Shark Bay was memorable. The extent of Shark Bay is unbelievable and sailing in its turquoise waters inhabited by numerous dolphins, dugongs, turtles and sharks was a once in a lifetime experience. We can’t wait to continue studying its natural beauty and history. After conducting an extensive field survey of seagrass sediment cores across the Bay, analyzing the C content and sources, grain size and radiotracers 210Pb and 14C (you can find the complete dataset here), we estimated that Shark Bay seagrass sediments contain up to 1.3% of the total C stored in the upper meter of seagrass soils worldwide. Indeed, C-accumulation extended below the upper meter of seagrass sediments; we found at least 4,000 yr of continuous seagrass C accumulated in up to three m-thick sedimentary deposits, based on 14C results and the predominantly seagrass d13C signature of C along the entire thickness of the sampled sediments. The estimated seagrass C stores in Shark Bay are the largest, yet reported, for a seagrass ecosystem.

Piece of organic-rich, peat-like, sediment collected from a seagrass bed in Shark Bay

Unfortunately, the consequences of climate change can be felt everywhere around the globe, even ecosystems in a pristine World Heritage Site like Shark Bay are suffering them. A marine heatwave impacted Western Australia in summer 2010-2011. The effects were drastic and unprecedented; corals bleached, the blue swimmer crab and scallop fisheries collapsed as the temperate south-west marine ecosystems of Shark Bay experienced the sudden increases in sea temperature. The dominant seagrass, Amphibolis antarctica, and, to a less extent, Posidonia australis, experienced extensive declines across the iconic Shark Bay. This loss and the subsequent ecosystem wide impacts over the following 2 – 3 years were reported by researchers from the University of Western Australia and Florida International University (The Conversation, 8th October 2014).While the losses were significant (a 90% dieback was recorded in some areas across Shark Bay), the bay-wide seagrass habitat damage was still unknown.

We believed it was important to assess the potential effects that the heatwave-associated mortality event had on seagrass C stores. If Shark Bay seagrass ecosystems are a hotspot of C storage, their loss and the subsequent erosion and remineralization of their sediment C stocks could result in large CO2 emissions. What happened in the Bay also provides a salient insight to what may occur in many other parts of the world under future climate scenarios.

We joined forces with researchers from the Department of Biodiversity, Conservation and Attractions (DBCA) of Western Australia who mapped, with satellite image analysis, 78% of the Shark Bay Marine Park area prior to the marine heatwave in 2002, and in 2014. The mapping showed that 22% of the seagrass habitat was completely lost between 2002 and 2014. This is equivalent to a loss of no less than 1,000 km2 of meadows if extrapolated to the entire Bay. The effects of the marine heatwave, however, were even more drastic when we looked just at dense seagrass habitats, which included a shift of about 36% of the 2002 area to either sparse seagrass or bare sand in 2014.

Using a model of sediment C loss following disturbance1, we modelled the potential CO2 emissions associated with the remineralization of sediment C stocks in the damaged seagrass area. We omitted potential CO2 emissions from dead biomass decomposition in our estimates as its fate is unclear; it might be buried or exported somewhere else escaping remineralization. We considered that between 10 and 50% of the C stock within the top meter of sediment could have been exposed to oxic conditions after the event. The reasons why we chose this range were: (1) we believed it was unlikely that all the C buried in the upper meter of seagrass sediments could have been exposed to oxic conditions; and (2) it was also unlikely that seagrass sediments would have remained intact after canopy loss. After the event, water clarity decreased progressively and significantly due to the resuspension of sedimentary particles following the loss of the sediment stabilization capacity provided by the seagrass canopy. In addition, widespread phytoplankton and bacterial blooms were observed in both gulfs of Shark Bay as a result of increased nutrient inputs to the water column from degraded seagrass biomass and sediment erosion2, providing favorable conditions to CO2 emissions3. Oscar Serrano, who revisited the area in December 2017 found high turbidity in the water column throughout damaged seagrass areas, which, 8 years after the event, still do not present signs of recovery (see video).

Gathering all these data together involved a broad collaborative effort. While this made the road to publication long, it has was worth the effort. The multidisciplinary expertise of the team (marine biology, geostatistical modelling, remote sensing and biogeochemistry) was key to integrating all the results and providing the first evidence for globally significant CO2 emissions from seagrass soils triggered by a marine heatwave. Unfortunately, with the increased frequency of heatwaves forecasted with further climate warming, we fear this is one of many works to come.

Now we know the potential effects that such impacts may have in fueling climate change. From 2 to 9 million metric tons of CO2 would have been released during the following three years after the event. This amount is roughly the equivalent to the annual CO2 output of 800,000 homes, two average coal-fired power plants or 1,600,000 cars driven for 12 months. It also potentially raised the estimate of Australia’s annual national land-use change CO2 emissions by up to 21%. Whereas our arguments are, thus far, based on projections and calculations, this release of CO2 will only cause further heating of the atmosphere and the oceans, evidence of a potential positive feedback of heatwaves on climate change through the destruction of global hotspots for C storage. This stresses the importance of reducing greenhouse gas emissions, and implementing management actions to enhance and preserve natural carbon sinks.

Impacts from global threats such as marine heatwaves are challenging to manage and require good knowledge as a basis for planning. Conservation actions for seagrass meadows should primarily aim to avoid the loss of vegetation and enhance their resilience. There is a global need to advance our understanding of how seagrass ecosystems, especially those living close to their thermal tolerance, will respond to global change threats, both direct and through interactive effects with local pressures. 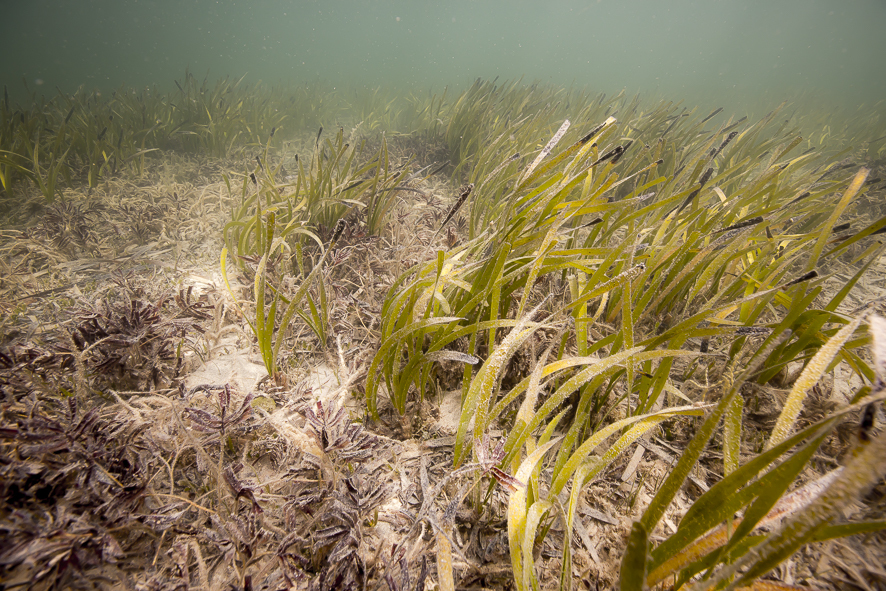 Seagrass ecosystems have been identified as natural carbon sinks whose conservation could serve as a strategy to mitigate carbon emissions. Seagrass ecosystems are, however, experiencing world-wide decline, raising concern to the potential for their sediment organic carbon stocks to be re-emitted to the atmosphere as carbon dioxide, fueling climate change. Indeed, warming with climate change, and particularly the increased frequency of marine heat waves forecasted, has been identified as a likely driver of a further acceleration of seagrass loss.