A community from Nature Ecology and Evolution
Contributor Nature
Behind the Paper, Humboldt Anniversary

From a chat over coffee to a continent-wide study on the response of summit plant communities to accelerating climate change. By walking halfway around the globe.
Sonja Wipf
Senior Researcher, Plant Ecologist, WSL Institute for Snow and Avalanche Research SLF, Davos
Follow
Liked by Patrick Goymer and 7 others

By Sonja Wipf, with major contributions from Manuel Steinbauer.

Our paper in Nature can be accessed here.

While having a coffee break chat about century-old notes of a local botanist back in 2009, none of us imagined this conversation turning into a continent-wide collaborative project resulting in a stunning example of human-made climate change effects in remote mountain summits, now published in Nature’s last issue. But then again, great collaborations often form over a cup of coffee.

Wilhelm Schibler, a local doctor and botanist, had surveyed plant species on 66 summits around Davos, Switzerland more than a hundred years ago (Schibler 1897, 1929), and it seemed like a pleasant pastime for plant ecologists to check out how our “local patches” had changed over the past century. Even faith can’t move summits, thus this historical data would provide precisely located baseline information to allow us to quantify change in nature over the past century - a rare scientific treasure. So when Veronika Stöckli, Christian Rixen and I took off to botanize Baslersch Chopf (2628 m) the following weekend, we were curious how its flora had changed, but even more we were eager to check whether this historical data was of any use.

In fact, this first survey felt like a treasure hunt to us. A new species could have been waiting behind every corner (and there are many “corners” on summits), and we wanted to find every one of them. If we had wondered why 100 years ago a botanist had collected species lists on dozens of summits as a pastime, now we knew. We were living out some deeply rooted human behavior (hunting and gathering) and at the same time our dearest hobbies (hiking, climbing, and observing nature), in nice company and at some of the most beautiful places on earth. We were addicted.

Apart from having tremendous fun, the outcome of our first summit resurvey was stunning. We realized that Schibler had not only listed tall, showy or particular species, but also inconspicuous, unattractive and difficult to distinguish ones such as tiny Caryophyllaceae species or grasses. This made us confident that he had been serious about compiling complete species lists, and that we could treat them as presence-absence data. We found 54 out of the 57 “historical” species again, but on top of it, almost as many new ones. Many new species were typical for lower elevations, such as three tree species, with one individual > 50 cm tall. This was a very different community from what Schibler had seen here a century ago. Veronika, Christian and I spent almost each weekend of the summer of 2009 on summits and found very similar patterns on the 13 we visited.

Higher species numbers on summits compared to historical data had been found as early as 1983-86 (Hofer 1992), in the 1990s (Grabherr et al. 1994, Klanderud & Birks 2003) and early 2000s (Walther et al. 2005, Vittoz et al. 2009). However, our impression was that we found more striking changes than documented before. Was this because earlier studies dealt with nival summits higher than 3000 m asl, while ours were several hundred meters lower? Or because new species were arriving at a faster rate? We wanted to find this out by assembling a large database of resurveyed summit floras for robust statistical analyses, covering a wide geographical and altitudinal range within the Swiss Alps. We thus started diving into the botanical literature of the early 20th century to find further historical baseline records. We did our background reading on the “who’s who” in contemporary alpine botany and scrutinized libraries, herbaria and archives, to gain hints on the reputation, abilities and motivation of the early summit botanists and find additional data. We even got in touch with the descendants of Wilhelm Schibler, our local Davos botanist.

By autumn 2011, thanks to several field assistants and many volunteers, we had resurveyed more than 150 summits and passes in the Swiss Alps, many of them twice to study how observer bias may influence our results (Burg et al. 2015). Moreover, we had revisited all Swiss summits that had been re-surveyed before. These results indicated an exciting pattern: the establishment of new species had accelerated distinctively over the past decades. One example is Piz Linard, where species numbers had risen from 1 in 1835 to 10 in 1937, but then from 10 in 1993 to 16 in 2011 (Wipf et al. 2013).

Other working groups followed similar ideas (e.g. John-Arvid Grytnes and Kari Klanderud along with colleagues in Norway; the worldwide GLORIA initiative with more recent monitoring activities on summits), and we joined forces to increase the representativity of our studies. It quickly became clear that in order to go beyond case studies in different regions, we needed to extend our datasets towards a continent-wide coverage. Data from different regions with different rates of climate change would allow us to test for relationships between species enrichment and changes in climate. Days and weeks scrutinizing the “Geographical guide to floras of the world” (Blake 1962), digital archives, library catalogues, and historical publications brought to light summit species lists from additional European regions, where GLORIA summits were also present. Alpine botanists from these regions and other scientists joined our approach and over the years an international network of summit botanists formed, many of which are now good friends.  Without major funding for the continent-wide field work, this team re-surveyed as many summits as possible, and many weekend or summer holiday trips were chosen according to the “summit bucket list”.

With the exception of two summits (where we were dropped off by helicopter on the flight into a remote research station), all ascents were done on foot from the nearest road or cable car station. To collect the data of the presented dataset, the gross kilometers1 hiked by the “new” summit flora network over the last 10 years amounts to approximately the distance between Svalbard and Melbourne (14’988 km). In total, the altitudinal meters climbed to reach the summits equals 31 times the distance from the Mariana trench to Mount Everest (617’129 m). Adding the estimated effort of the earlier summit botanists, the gross kilometers represented by the total dataset amount to 26’950 km, which corresponds to more than halfway around the globe.

Collecting the data was only the first step of our scientific endeavor. We needed to make sure that differences in plant species lists were not caused by a differing understanding of plant taxonomy between us and the historical botanists. A lot of time was spent cleaning the data and discussing the most appropriate way to analyze them. This included a lot of debates and exciting meetings. Most notable is the one in Bergün in September 2013, where many European summit botanists met in person for the first time, and the sUMMITDiv working group meeting in Leipzig at the German Centre for Integrative Biodiversity Research (iDiv) in November 2014. Many more meetings and hours in front of the computer followed before summarizing the information from plant surveys spanning 140 years into just few data points integrated in small figures in our manuscript “Accelerated increase in plant species richness on mountain summits is linked to warming” in Nature’s last issue.

What had started in a coffee break among colleagues had become a great collaborative project, during which many new friendships had formed. Working with summits that had been surveyed over a century ago also established an emotional connection to the past. The early botanists were driven by a deep inherent interest to understand the ecology and distribution of alpine species, and we are driven by the same interest, in a time of increasing human impact and accelerating change. While first summit floras (e.g. Piz Linard 1835) were collected years before some of today’s general knowledge that form pillars of biogeography were discovered, such as the continental drift, the theory of evolution, or the occurrence of the ice ages, many early botanists explicitly assembled their data for people like us to monitor change over the centuries to come. In 1913 Josias Braun-Blanquet noted in a publication that “on the basis of a comprehensive description of locations, it will not be difficult to verify my species lists, and an increase or decrease of species richness in the future will be possible to detect with high certainty”. In our research, it became very clear that we were standing on the shoulders of giants. Maybe we will become little giants as well with time - we certainly hope that future generations may find our legacy equally useful as we did our predecessors’.

where D is the distance covered by foot from the nearest access point to the summit (measured on a map along the route, in km), Alt is the altitudinal difference uphill covered on this route (in m), and N Pers is the number of persons that accessed the summit.

I would like to dedicate my contribution to this paper to Philippe Roux-Fouillet and his family. 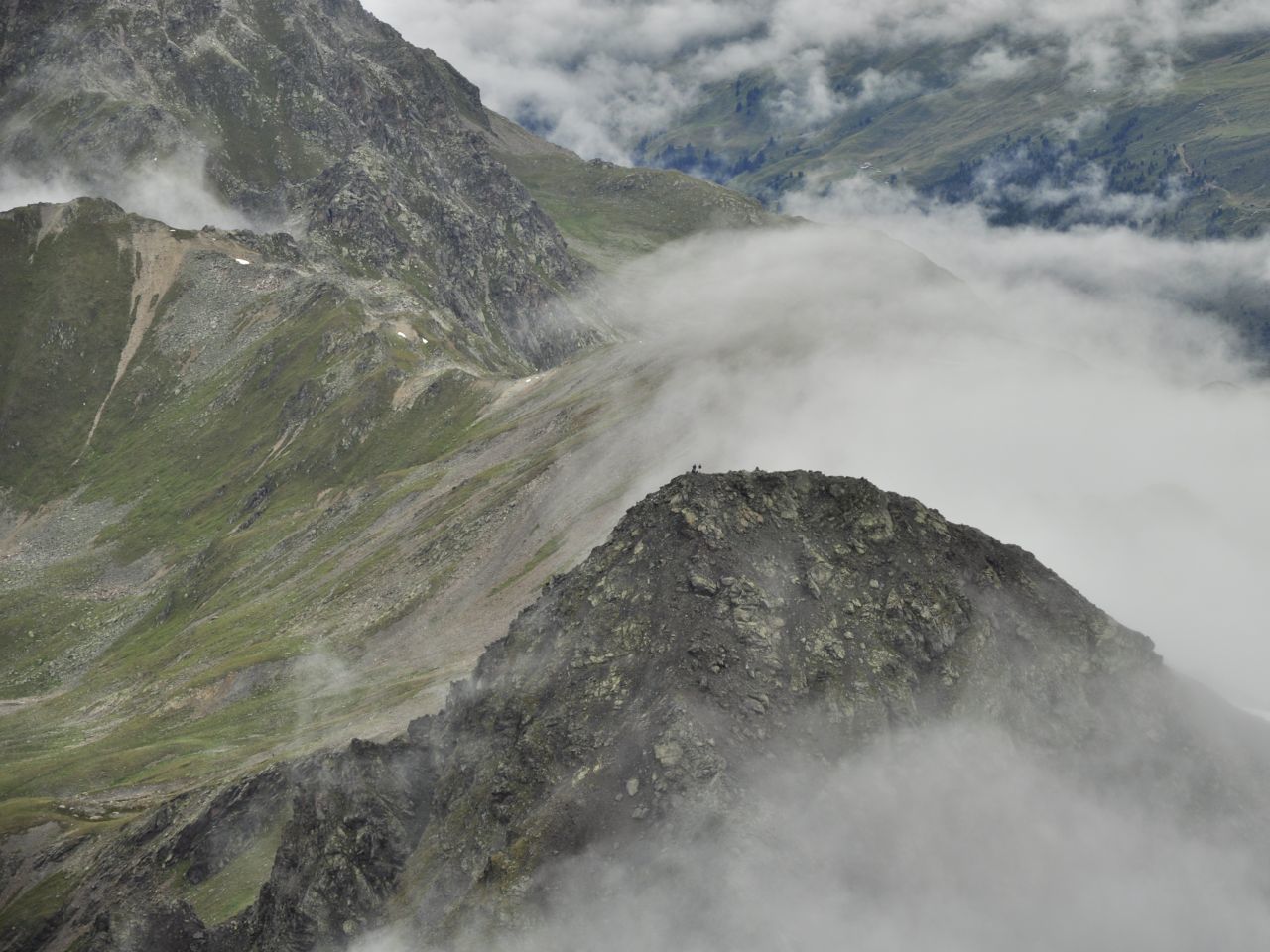 From a chat over coffee to a continent-wide study on the response of summit plant communities to accelerating climate change. By walking halfway around the globe.