An Acetyl CoA pathway before enzymes?

The Acetyl CoA pathway for carbon dioxide fixation may have prebiotic roots as metal promoted chemistry.
Joseph Moran
Professor, University of Strasbourg
Follow
Like Liked by Ben Johnson and 2 others
0

Life ultimately builds itself from CO2. Could this attribute have extended back to prebiotic chemistry at the origin of life? Biologists have long suspected this to be the case, since it would maintain a high level of continuity between prebiotic chemistry and core anabolic biochemical pathways. However, many chemists think that prebiotic CO2 fixation is unlikely since CO2 is a relatively unreactive molecule. Even when chemically reduced, it typically produces other single-carbon compounds and is not the best candidate for forming C-C bonds. Consequently, for the past 60 years much research in prebiotic chemistry has focused on how nature might have built up carbon-based molecules with other more reactive single-carbon molecules such as HCN, formaldehyde or formamide. Chemically speaking, this makes a lot of sense, but this approach is bogged down by its own problem: even if interesting chemistry is found, how can we know if it has any relevance to the origin of life, since life shows no sign of ever having done things this way?

A little background on how microbes grow from CO2: Autotrophic organisms use six known chemical pathways to fix CO2 to build up their biochemistry. The most ancient of these is thought to be the Acetyl CoA pathway (also known as the Wood-Ljungdahl pathway), which is the only one that is linear, rather than a cycle, and the only one that doesn't strictly require ATP (the bacterial version uses ATP - the archaeal version doesn't). With the help of transition metal-containing enzymes and cofactors, it reduces one molecule of CO2 to carbon monoxide (CO), reduces a second molecule of CO2 to a methyl (CH3) group and then sticks the two pieces together to make an acetyl group (CH3CO-). Acetyl groups can react once more with CO2 and two electrons to become pyruvate, the precursor to all sugars (some biochemists consider this step to be part of the Acetyl CoA pathway, while others do not). Phylogenetic studies indicate that the Acetyl CoA pathway was likely operating as far back as we can infer from genetics. Discovering simple chemistry that performs a similar function could allow us to draw a connection between the prebiotic and the biochemistry happening in early life.

To get the electrons it needs to run the Acetyl CoA pathway, life uses complex enzymes and cofactors to split H2 gas into two protons and two electrons. But it’s not simple. If H2 is split in a typical way, the resulting electrons aren’t sufficiently reducing (not enough potential) to do the job. To solve the problem, life uses a complex mechanism known as electron bifurcation to split up the pair of electrons - one electron gains sufficient potential to fix CO2 while the second is rendered much less reducing to conserve energy. The complicated infrastructure needed for electron bifurcation leads to a paradox when thinking about the origin of the Acetyl CoA pathway. If CO2 fixation was happening before those enzymes evolved, then either it was mediated with H2 by some yet undiscovered mechanism or life originally drove CO2 fixation with a more reducing source of electrons than H2 can offer.

The chemical experiments in our latest paper support the latter possibility. We show that metallic iron reduces aqueous CO2 to acetate and pyruvate under a wide range of temperatures and pressures, even at ambient conditions. The chemistry occurs on the surface of the metal. Determining detailed chemical mechanisms on surfaces is very difficult and beyond the scope of our paper, but the observed product distribution, the evolution of the reaction over time and the way the reaction responds to various control experiments is consistent with a mechanism roughly similar to the biological pathway. Given the extreme simplicity of the materials in this chemical reaction (just Fe, CO2 and salty water), this means that not only is CO2 fixation a feasible prebiotic mechanism for building up biomolecules, but it also happens in a way that resembles biochemistry. While it’s impossible to know whether or not this reaction was actually a historical precursor to the biological Acetyl CoA pathway, it does line up very well with what phylogenetic studies have concluded about the ancient nature of the pathway. At the very least, it provides some insight into how early CO2 fixation pathways might have come into existence.

The fact that metallic iron does this chemistry is also significant because we had recently shown that metallic iron together with some metal ions can drive more than half the reverse Krebs cycle, another ancient CO2-fixation pathway (see related blog post). Some have theorized that the two pathways operated together, in whole or in part, in ancient metabolism.

This is an exciting time for research on the origins of metabolism. In the past few years, chemistries resembling glycolysis, gluconeogenesis, the Krebs and reverse Krebs cycles, and now the Acetyl CoA pathway have been reported to be promoted without enzymes by various inorganic catalysts and reagents. Non-biological cycles incorporating some intermediates of the Krebs cycle have recently been demonstrated.  The problem is still far from solved, but the idea that "metabolism recapitulates biogenesis" - that prebiotic chemistry might bear some resemblance to extant biochemistry - is no longer of the "if pigs could fly" variety.

The paper in Nature Ecology & Evolution is here: https://go.nature.com/2K8GHRf

Joseph Moran
Professor, University of Strasbourg
Follow
I'm a synthetic organic chemist interested in catalysis in complex systems and the origin of biological metabolism. I also dabble in controlling chemical reactions by influencing their molecular vibrations.

Metabolism before ATP and enzymes 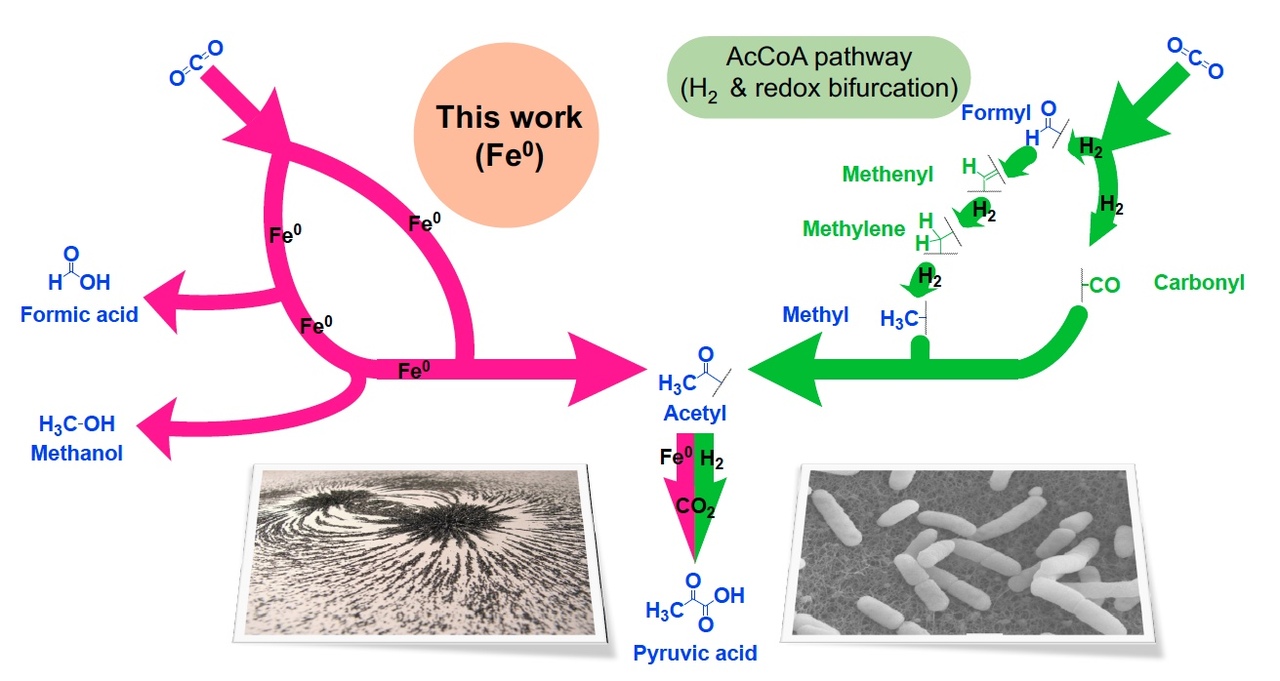 An Acetyl CoA pathway before enzymes?

The Acetyl CoA pathway for carbon dioxide fixation may have prebiotic roots as metal promoted chemistry.