Our new paper, which we would love to discuss in this forum, so please let us know your thoughts: First anatomical network analysis of fore- and hindlimb musculoskeletal modularity in bonobos, common chimpanzees, and humans (https://www.nature.com/articles/s41598-018-25262-6)
Rui Diogo
Associate Professor, Howard University
Follow

Studies of morphological integration and modularity, and of anatomical complexity in human evolution typically focus on skeletal tissues. Here we provide the first network analysis of the musculoskeletal anatomy of both the fore- and hindlimbs of the two species of chimpanzee and humans. Contra long-accepted ideas, network analysis reveals that the hindlimb displays a pattern opposite to that of the forelimb: Pan big toe is typically seen as more independently mobile, but humans are actually the ones that have a separate module exclusively related to its movements. Different fore- vs hindlimb patterns are also seen for anatomical network complexity (i.e., complexity in the arrangement of bones and muscles). For instance, the human hindlimb is as complex as that of chimpanzees but the human forelimb is less complex than in Pan. Importantly, in contrast to the analysis of morphological integration using morphometric approaches, network analyses do not support the prediction that forelimb and hindlimb are more dissimilar in species with functionally divergent limbs such as bipedal humans.

Paper freely available here, for you to read, and discuss with us:

Book: evolution and development of muscles of all chordates

First use of anatomical networks to study fin-limb transition 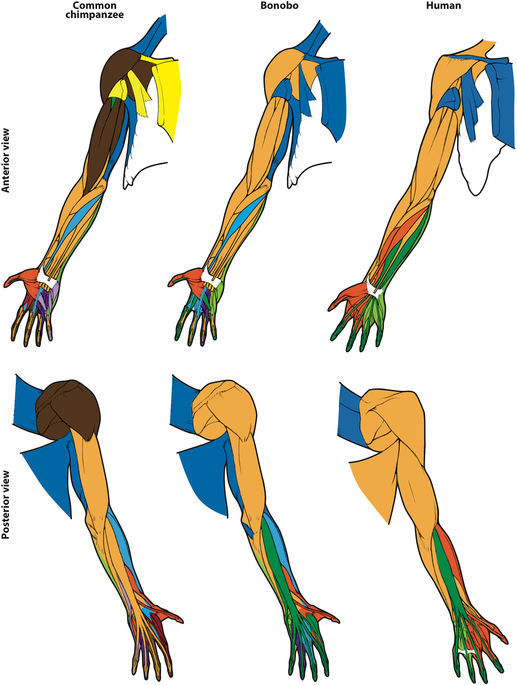 Our new paper, which we would love to discuss in this forum, so please let us know your thoughts: First anatomical network analysis of fore- and hindlimb musculoskeletal modularity in bonobos, common chimpanzees, and humans (https://www.nature.com/articles/s41598-018-25262-6)