I have just returned from White Sands National Monument (WHSA) in New Mexico.  The team was doing more fieldwork on the human and megafauna tracks preserved there and the plan was also to be on hand for the publication of our first paper from the site in Science Advances last Wednesday (25 April 2018).  It proved a stressful week.  Dealing with press queries from the desert with poor mobile phone reception in searing heat was not easy.  I am not sure I will choose to be in the field for the next instalment which we are currently preparing!

White Sands is an amazing place, probably the whitest place I have ever been.  It known for having the largest gypsum sand dunes in the World, and less known for the Alkali Flat which is a huge eroded Pleistocene lake bed and the source of the sand.  The playa is in co-use with the US Military, part of the White Sands Missile Range, and was the birth place of the US Space Programme and countless missile tests.

The story we published last week is based around the first discovery of human footprints at White Sands and more importantly their association with giant ground sloth tracks which became extinct at the end of the Pleistocene.  I was out there with David Bustos (Resource Manager at WHSA) in April 2017 when we first discovered the human tracks and more importantly human tracks superimposed in those of sloth.  In fact I was lying on the desert floor paint brush in hand sweeping out the infill of the track when the first of these special tracks was revealed.

In time, a whole trackway of these double prints emerged, and at the end a circle of tracks, which appear to record how the sloth reared up on its hind legs and swung it forelegs at the human that followed (or stalked) in its tracks.  A line of toe impressions give evidence to a possible second hunter trying to strike while the sloth was distracted.  It was an exciting time reading the clues left by this animal interactions, such interactions are very rare in the ichnological record (trace fossils).  Ground sloth would have been formidable prey with long forearms tipped by viscous claws.

Reading the tracks in the field I was confident about what had taken place, but it took a lot to convince those authors on our paper who had not seen the tracks directly.  Were the humans simply teasing or harassing the sloth because it was fun?  Where is the evidence of the intent to hunt?  These are the questions which my co-authors posed as we wrote the paper up for publication.  It was a piece of work suggested by Dave Raichlen one of the co-authors that helped convince many on the team.  He suggested we look at the tortuosity of the sloth tracks.  They proved to be more twisted and tortuous  (with lots of twists and turns) where human tracks were present and relatively straighter were they were not.  The sloths were taking evasive action in the presence of humans.  This was not a one-off behaviour, but a common one.  You can’t rule out some of the alternatives, but I believe that hunting is the only realistic explanation; who would provoke a fearsome animal without just cause?  There was a social media post last week that re-drew our reconstruction to look like a sloth dancing at a disco: one of the least likely interpretations of the trackways!

What comes next?  Well we are already working on the next paper and story to come out of White Sands and it is another exciting story of behavioural ecology in the Terminal Pleistocene.  We hope to have it published later this year. 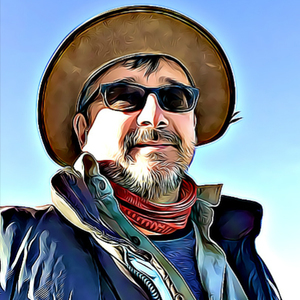