Framing Frogs: A new study on environmental economy helps improve the preservation of amphibians in the Brazilian Atlantic Forest.

Thinking about the economic benefits of preserving amphibians may seem strange, but the fact is that such species are relevant environmental service providers. According to an article published in the journal Science Advances, amphibian biodiversity helps to maintain different aspects of the environment that are fundamental to human well-being. The new study, led by Felipe Siqueira Campos, from the Faculty of Biology of the University of Barcelona, warns about the important need of more efforts on the conservation of the area’s biodiversity, which is the natural habitat of more than 500 amphibian species, in which there is a 90% of endemic species.

Losing natural habitat is the most important threat for the species’ survival. Therefore, selecting the areas to be protected is crucial to design a new systematic planning in the conservation of biodiversity.

The conclusions in the study, also signed by Ricardo Lourenço-de-Moraes (Federal University of Goiás), Gustavo Llorente (University of Barcelona) and Mirco Solé (State University of Santa Cruz, Bahia), are based on an innovative protocol with effective conservation measures to define new priorities to assess the biodiversity in the Brazilian Atlantic Forest. This new approach on environmental economy, with amphibians as its object of study, could also be applied in species-rich regions that have endangered species.

The new protocol considers threatened species, protected areas and the related values related to the economic cost of the land. In particular, the study provides three complementary models on economic estimations to represent the biodiversity components – functional, phylogenetic and taxonomic diversity – in relation to their protection capacity.

Functional diversity is a dimension that represents the level of differences between species according to the morphological, physiological and ecologic characteristics. Phylogenetic diversity adds value to the distinction of species in accordance to their evolutionary processes, and this concept reflects the evolutionary divergence process and time in the tree of life. Last, taxonomic diversity represents the number of species assigned to a particular region. In this context, combining indicators on functional, phylogenetic and taxonomic diversity is a methodological tool that helps predict differential effects of competition and environmental filtering in the community assembly.

According to the UB researcher Felipe S. Campos, first author of the study, this innovative design shows that prediction models focused on functional, phylogenetic and taxonomic diversity can include cost-effective economic values of the land. The main message is that economic costs of the land that are attributed to in our models can work as an effective mechanism to pay for the environmental services. Compared to Brazilian agrarian activities, this value corresponds to a 24,13% of the average profit of the local agricultural land.

To create the models, the authors included the unprotected areas –which are a priority for the conservation of biodiversity- with at least an endangered species. Calculating the economic cost of the land is based on the average value of year payments made by the Ministry of Environment in Brazil to the owners of forest remnants in the Atlantic Forest as an ecological compensation (specifically 13.273 dollars per km2) for environmental services.

The authors warn that a 90% of the functional, phylogenetic and taxonomic diversity of amphibians in the Atlantic Forest is still outside the available protected areas. Also, they identified a high functional and phylogenetic diversity in the east side of the Atlantic Forest, in a gradient of growing values that range from the central area to the north-eastern side of the biome. The new research study also describes some spatial imbalances in the studied areas, apart from a high correspondence between the biodiversity components evaluated by the authors. 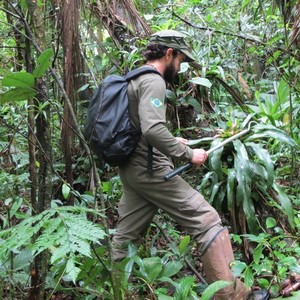