Our journey to sequence the first two fern genomes

The paper on Azolla and Salvinia fern genomes was published in Nature Plants: https://www.nature.com/articles/s41477-018-0188-8

"Between two ferns" is a quirky comedy show where the host (Zach Galifianakis) and his guest sit between two potted ferns (Nephrolepis exaltata to be exact) and have an excruciatingly awkward conversation - the episode with Obama was one of the funniest things I've ever seen. Although I secretly wanted to put "Between two ferns" in the title of our Nature Plants paper, it seems more appropriate here...

Ferns, the sister lineage to seed plants, for a long time had been a genomic desert. Things started to get more exciting in 2014, when a large number of fern transcriptomes were suddenly flooding in from the One Thousand Plants project (1KP). I was a grad student then with Kathleen Pryer at Duke University, and the conversation in the lab was often centered on how to move on to the next step - i.e. getting a fern genome sequenced. Unfortunately, fern genomes are big, and Ceratopteris richardii, a model fern species that you can do reverse genetics with, is whopping 12 Gb.

But biology always has an exception, and the exception in this case is a mighty little fern called Azolla. Azolla genome was reported to be only 0.75 Gb (we confirmed it ourselves), which is totally manageable. Most importantly, Azolla happens to be the most economically important ferns. There was a massive Azolla bloom in the arctic 50 million years ago that geologists believe it had drawn down significant amount of CO2 and helped cool the earth. Azolla is also a nitrogen-fixer due to its symbiosis with N-fixing cyanobacteria, and has been used in East Asia for hundreds of years as a natural nitrogen fertilizer in rice paddies.

However, getting funding for Azolla genome wasn't easy; all our letters of intent were declined. Then we saw our colleagues doing a crowdfunding campaign to support their field expedition, and we thought, hey that's cool! Me, Kathleen, and a few other folks in the lab - Erin Sigel (now at U of Louisiana), Carl Rothfels (now at UC Berkeley), and Paul Wolf (on sabbatical from Utah State U) - brainstormed a bit and setup a project page at Experiment.com. The first few days of crowdfunding were basically just us (and my mom!) throwing money into the pot. But with lots of social networking (I learned how to tweet for the first time! follow me @fern_way), the news spread and the Economist even wrote an article about our project.

It was extremely rewarding to see support from outside of our academic circle. There were a high school student from Oklahoma, a science fiction writer from Oregon, a psychiatrist from Canada, ...

Importantly, our crowdfunding "fame" got us connected to other researchers. Henriette Schluppman and her team at Utrecht University have been working toward "domesticating" Azolla for bio-based economy. They have already made significant progress on getting Azolla genome sequenced. In addition, Gane Ka-Shu Wong at BGI-Shenzhen and University of Alberta, generously offered the sequencing power at BGI free-of-charge. And finally, Josh Der, a fern biologist-turn-genomicist at California State University came on board to take charge of genome annotation.

After a few skype meetings in 2014 (scheduling US-Europe-China video conferences was a pain by the way), the team Azolla was formed. Furthermore, with the additional financial support from BGI and crowdfunding, it became clear that we could potentially sequence another fern as long as its genome size is comparable to or smaller than Azolla.

I suspected there are other fern species in Salviniales (where Azolla belongs) that have small-ish genomes. I asked my friend Li-Yaung Kuo (now my postdoc) to collect materials from all Salviniales genera and estimate their genome sizes using flow cytometry. It turned out that Salvinia, Azolla's sister genus, has a even smaller genome, a jaw-dropping 256 Mb; that's a third of Azolla and ~600X smaller than the largest fern genome. We happily generated 40X PacBio data on Salvinia cucullata, and in mid-2015, we already had two fern genomes at our hand.

A lot of things have happened since 2015. I got my PhD, did postdoc, and got a faculty position at Boyce Thompson Institute and Cornell. I recruited collaborators along the way and together made several important discoveries. Then my wife and I were expecting our first child, which was due in January 25, 2018. I realized it's the now-or-never moment - either we push to finish the manuscript before the (baby) due date, or I'll be too overwhelmed for months to do anything about it. So with the help of the amazing co-authors, we finalized and submitted the manuscript just a few days before my son was born. 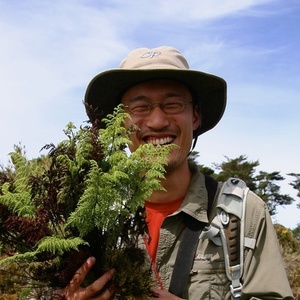