Cichlid fishes are one of the most species-rich families of vertebrates –about one in every 10 fish is a cichlid! Their astonishing diversity is the result of an exceptionally successful evolutionary history shaped by vicariance- and opportunity-driven speciation. Cichlids are also a textbook model system for the study of adaptive radiation, phases of extremely rapid speciation in connection with eco-morphological diversification, and often sympatric speciation. Most of this diversity (~90% species) is concentrated in the endemic species flocks of the East African Great Lakes. Among these, Lake Tanganyika harbors the oldest and ecologically, morphologically, and genetically most diverse cichlid radiation, that is also the cradle of the two large adaptive radiations of Lakes Victoria and Malawi, each comprising ~500 and ~800 endemic haplochromine cichlids, respectively. Despite over 20 years of research on the molecular phylogenetics of African cichlids, important questions still remained unresolved and our study attempted to provide an answer to some of them.

The project was initiated at a meeting of the European Society of Evolutionary Biology in Lisbon in 2013 and ended up being a collaboration between the University of Graz (Austria), the University of Konstanz (Germany), and Florida State University (USA). Such large collaborations require logistic and scientific coordination including long email conversations, regular Skype meetings but also enjoyable personal meetings with Schnitzel and Leberknödel soup, for example in Vienna (SMBE 2015) and Prague (Cichlid Science 2017).

We aimed to resolve the phylogeny of the major lineages of cichlids with emphasis on the Lake Tanganyika radiation. The first challenge was to assemble a comprehensive, yet manageable taxon set for anchored hybrid enrichment sequencing, in terms of tissue availability, finances, and anticipated computation resources. Many samples were collected during an expedition by the teams from Graz and Konstanz to the Congo and Burundi side of Lake Tanganyika in 2013, and in Zambia, augmented with samples of rare species that were collected over the past 25 years. After long hours in the laboratory, we converged onto two 96-well plates containing precious purified DNA that we sent to Florida.

One day, we got the following email: “The data from the Lemmons arrived. Enjoy!” When I first looked at the data I was astonished: such nice, long, beautiful alignments! This data proved powerful enough to resolved the relationships even among the most contested branches in the cichlid family tree and the rapid early radiation of Lake Tanganyika. Reliably estimating evolutionary relationships within extremely fast diverging adaptive radiations is a difficult endeavour because fast speciation allows little time for the accumulation of shared derived changes (synapomorphies) and increase the chance for incomplete lineage sorting. Our phylogenetic trees turned out to be very robust and unexpectedly congruent between concatenation and coalescence methods. Given that concatenation does not account for incomplete lineage sorting, this result puzzled us at first, but soon started to make sense (look into the paper for our interpretation!).

A second clear yet astonishing pattern was the incongruent position of the Congo River species Steatocranus casuarius (Tribe Steatocranini) between the concatenated and coalescent trees. We argue that its incongruent position most likely reflects ancient hybridization between the Steatocranini and the ancestor of ‘modern’ Lake Tanganyika tribes. Therefore, we propose a so-called hybrid swarm scenario also for the early Lake Tanganyika radiation, in that hybridization after initial divergence boosted adaptive radiation, as suggested for the two younger haplochromine radiations in Lakes Malawi and Victoria. Even if the Steatoranus lineage is not represented among the Tanganyikan tribes, their ancestral colonizers contributed genes via hybridization with other colonizer lineages at an early stage, when the genomes were still compatible. Likewise, we found signals for hybridization at the base of the haplochromine cichlids, the most diverse tribe comprising almost all the endemic cichlids in the spectacular haplochromine radiations of the Tropheini in Lake Tanganyika and of the species flocks in Lakes Victoria and Malawi, plus several other lakes in the East African Rift Valley. Overall, our results support ancient hybridization as an important evolutionary phenomenon fuelling all major cichlid adaptive radiations in African Great Lakes. The hybridization events at the onset of the Lake Tanganyika radiation (dated between 13.7-12.7 million years ago) are among the oldest described so far in animals.

Another area of conflict concerned molecular dating of the cichlid radiation, that was in part triggered by vicariant events in conjunction with the split of Gondwana, and in part triggered by ecological opportunity after the formation of stable lakes.  Dating has been notoriously difficult, previous studies suggesting a wide range of ages. Traditionally, the deepest divergences in the cichlid tree were assumed to reflect the splits of Gondwana since their current distribution conforms to the vicariance pattern. However, studies that applied these vicariant calibrations led to estimated ages for the African cichlid radiations that were too old for the geological ages of the East African lakes to assume endemic radiations. On the other hand, molecular dating studies applying fossil calibrations recovered more reasonable ages for African cichlids, but the deepest nodes in the tree were too young to assume Gondwanan vicariance, and thus they invoked long-distance dispersal of cichlids across salty oceans to explain current distributions. Using a set of fossil calibrations, including a newly discovered fossil that anchors the Tanganyikan radiation, we obtained timetrees that, for the first time, reconcile Gondwanan vicariance and the geology of East African Great Lakes, two major geological events in cichlid history.

Cichlids are globally known for their beautiful colors, particularly in males that need to attract females (in German they are Buntbarsche or “colorful perches”). Coloration is key for sexual selection and this has been considered a major player in speciation, and thus one would expect a strong effect of colour dimorphism in determining the molecular evolution of coloration genes, as well as possibly a coevolution between coloration genes and opsins that are responsible for color vision. Taking advantage of hybrid enrichment sequencing technology, we obtained high-quality molecular data for genes that had been previously linked to key cichlid innovations including body coloration and color vision (opsins), as well as genes expressed in the lower pharyngeal jaw, a key innovation that facilitated the exploitation of new food sources. Interestingly, our analyses based on selection coefficient (dN/dS) changes revealed frequent acceleration of positive selection phylogenetically associated with adaptive radiations of both the Lake Tanganyika species flock and the haplochromine cichlid lineage. For colouration genes, this pattern had a higher explanatory power than changes predicted solely on the basis of the presence of sex-related color dimorphism. For opsin genes instead, diet rather than water/lake depth (which determines the spectrum of visible light) was found to be the main factor shaping the patterns of molecular adaptation.

The full paper can be found at: go.nature.com/2Mp6Z2u 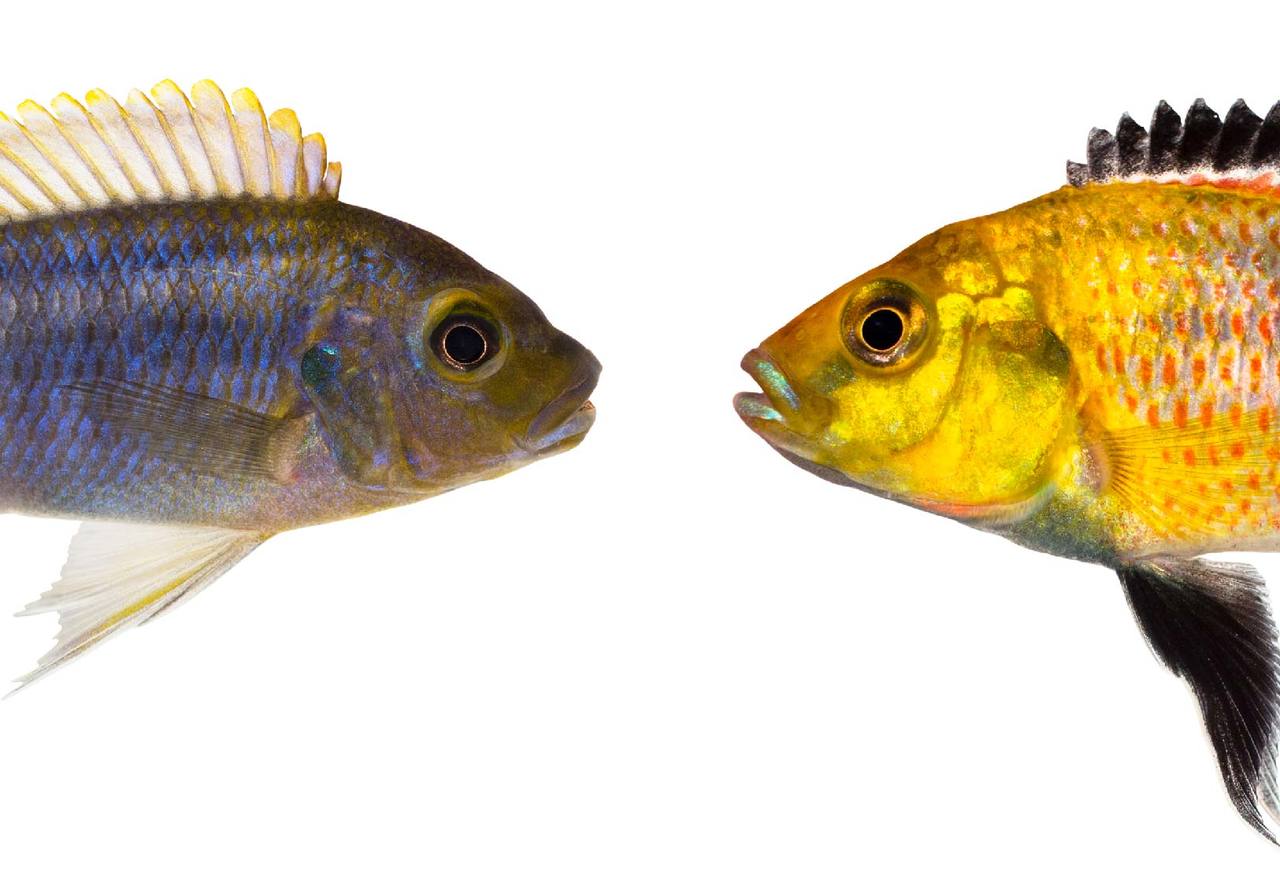