Meristems of the rooting axes of the Asteroxylon mackiei preserved in the 407 million-year-old Rhynie chert lacked a root cap. This discovery indicates that plant roots have had at least two independent origins in vascular plants and that the evolution of the defining characteristics of plant roots occurred in a stepwise fashion.
Sandy Hetherington
Junior Research Fellow, Magdalen College Oxford, University of Oxford
Follow
Like Liked by Patrick Goymer and 1 other
0

Our paper by Alexander (Sandy) J. Hetherington and Liam Dolan in Nature can be found here.

Roots are one of the primary organs of vascular plants where they function in symbiosis, anchorage and both nutrient and water uptake. However, despite being one of the primary plant organs uncovering when and how many times roots have evolved has perplexed botanists and palaeobotanists for over 100 years.

The reason for the difficulty in pinning down the origin of roots is due to the fragmentary nature of the fossil record and the poor preservation of the plant fossils within it. Specifically, the poor preservation of plant fossils means that the sole defining characteristic of the roots of modern plants – the development of a root meristem with root cap – is almost never preserved.

Without finding a fossilised root meristem we can’t be sure when roots first evolved, or if axes in the fossil record are roots or shoots. This is a serious problem for understanding the evolution of plant roots as it calls into question not just when and how many times roots evolved but also the sequence of anatomical changes that led to the evolution of this new organ.

To establish when roots evolved we needed to identify fossilised root meristems - ideally from the Devonian period when the earliest “root-like” axes have been described. In search of well-preserved Devonian rooting axes we turned to the Rhynie chert – the earliest preserved terrestrial ecosystem – with the aim of finding the rooting axes of the extinct clubmoss Asteroxylon mackiei.

Sandy started by examining the thin sections in the Palaeobotany Collection in the Oxford University Herbaria (OXF). It didn’t take long before Sandy discovered A. mackiei meristem. What was unusual about this meristem was that it lacked a root cap – the diagnostic feature of the roots of all modern plants.

However, to be confident that there wasn’t a root cap on the A. mackiei rooting axis and that it wasn’t an artefact we needed to find more examples of these meristems.

Over the next few months Sandy scoured the collections of Rhynie chert in the UK looking for more meristems – even returning to the thin sections Kidston & Lang used in their original description of A. mackiei. After looking through hundreds of thin sections he was beginning to give up on finding another. However, the last slide he examined at The Hunterian (University of Glasgow, UK) on a rainy December day was to prove to be the most important of his visit. The thin section contained two apices.  Both lacked root caps! One of the apices included a portion of the shank of the rooting axis preserving the vascular tissue diagnostic of A. mackiei. We now had multiple meristems and diagnostic vascular tissue that allowed us to be sure that these were A. mackiei apices.

In total Sandy examined 641 thin sections and discovered 5 apices of rooting axes. All axes lacked root caps suggesting these were a unique type of rooting meristem – a hypothesis that was confirmed by studying the cellular organisation of the meristems under a confocal laser scanning microscope (CLSM).

The CLSM images showed us that the cellular organisation of the meristems were inconsistent with the development of a root cap. The discovery of these fossil meristems indicate that roots with caps typical of all modern species evolved after the divergence of A. mackiei but before the divergence of the extant clubmoss lineages. This finding supports the hypothesis that roots had at least two independent origins in vascular plants. Furthermore the transitional rooting organ of A. mackiei with characters in common with both roots and shoots of modern plants illustrated that the evolution of roots occurred in a stepwise manner through a transitional form represented by A. mackiei.

This work couldn’t have been completed without the advice and guidance from Dr Tomasz Goral, Dr Christine Strullu-Derrien, Dr Charlotte Kirchhelle, Prof. Ian Moore and Dr Imran Rahmen. Or without funding to Sandy from Magdalen College, Oxford University and to Liam from the European Research Council and European Commission. 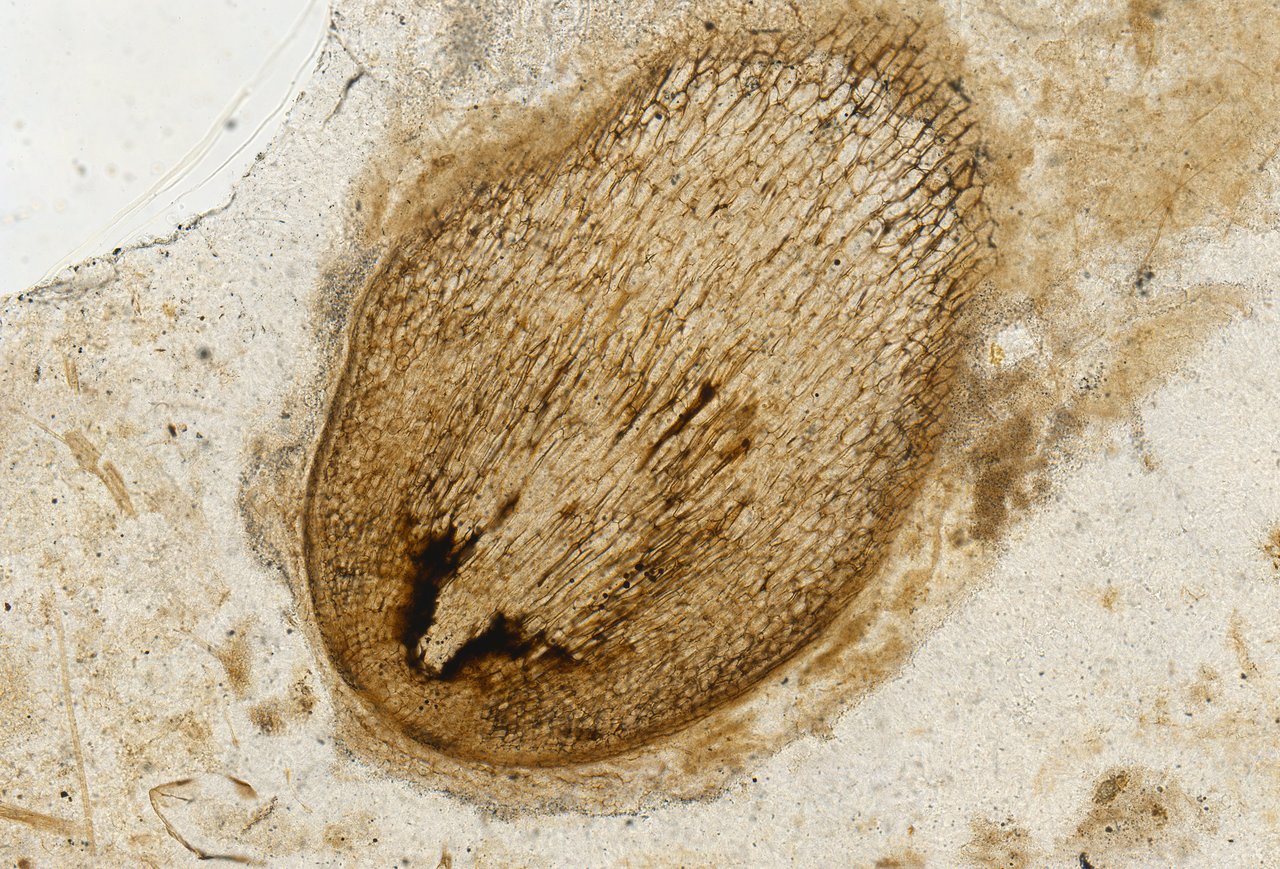 Meristems of the rooting axes of the Asteroxylon mackiei preserved in the 407 million-year-old Rhynie chert lacked a root cap. This discovery indicates that plant roots have had at least two independent origins in vascular plants and that the evolution of the defining characteristics of plant roots occurred in a stepwise fashion.