What were blue eyed people doing in Northern Israel 6,500 years ago?

A large-scale genetic study of the ancient population of Peqi'in revealed that the Chalcolithic culture in the region developed by waves of migration from Anatolia and the Zagros mountains about 6500 years ago. This study was carried out by an international team of researchers led by Dr. Hila May and Prof. Israel Hershkovitz from the Sackler Faculty of Medicine, Tel Aviv University, Dr. Dina Shalem from the Institute for Galilean Archaeology Kinneret College and the Israel Antiquities Authority, and Éadaoin Harney and Prof. David Reich of Harvard University.
Hila May
PI, Sackler Faculty of Medicine, Tel Aviv University
Follow
Like Liked by Ben Johnson and 3 others
0

Located in the western Upper Galilean Mountains, Peqi'in village is one of the oldest villages in Israel and among the most beautiful. The majority of the population in the village identify as Druze, who follow a traditional way of life.

In 1995, during construction work a stalactite cave was accidentally opened. It was soon realized that the cave, which is about 100 sq meters, contains some of the most outstanding anthropological finds ever recovered in Israel.

The remains of more than 600 individuals were scattered all over the floors or stored in magnificent pottery ossuaries (boxes for holding bones). Radiometric dating and the type and style of the cultural material suggested that the cave served as a burial site during the 5th millennium BC. The wealth of fine crafted objects within the cave, as well as the investment in reconstructing a floor and shelves within it, emphasize the importance of this burial site to the local people. This cave was used as secondary burial site, meaning that after an individual’s death, their bodies were buried and allowed to decay in a primary location, after which their bones were collected from their original place, and brought to the cave for their final rest. The ossuaries, decorated by painting and modeling, stressed that these people paid huge respect to their deceased. Walking inside the cave among the hundreds of skeletons which were covered by a limestone crust was like entering a time capsule. The number of individuals, the variety and style of the ossuaries, and the unique sculpture and drawings on the ossuaries were exclusive.

As anthropologists, we could reconstruct some aspects of the daily life of the people of Peqi'in by examining their bones. We could learn about their lifestyle, health, dietary habits, and identify signs of physical stress. Yet we could not answer one of the questions that we deemed most intriguing: Who were these people? Where did they come from? Answers to these questions could only be obtained by studying their DNA.

We approached our colleagues at Harvard University who currently run one of the largest laboratories for ancient DNA study. At first, our expectations were low as preservation of DNA from ancient bones in Israel is extremely poor. To our surprise, though, the pilot study suggested that DNA is well preserved in the bones from Peqi'in, particularly in petrous bones—a portion of the temporal bone that contains one of the densest elements of bone in the human body. But we never imagined that we would be able to extract DNA from 22 individuals, one of the largest sample ever from a single prehistoric site. The high success rate of DNA extraction is probably due both to the use of petrous bones, and to the unique conditions inside the cave, which was sealed for 6000 years inside which the bones were covered by a protective layer of limestone crust.

The outstanding results of this study are presented in a study published in Nature Communication (https://doi.org/10.1038/s41467-018-05649-9). It shows that the people of Peqi'in have ancestry related to that of earlier ancient groups from Anatolia and Iran – and not seen in earlier peoples from the Levant. This suggests that a migration into the region, bringing people who our genetic data showed had a high rate of blue eyes that were previously rare in the region, may have triggered the development of the Chalcolithic culture. 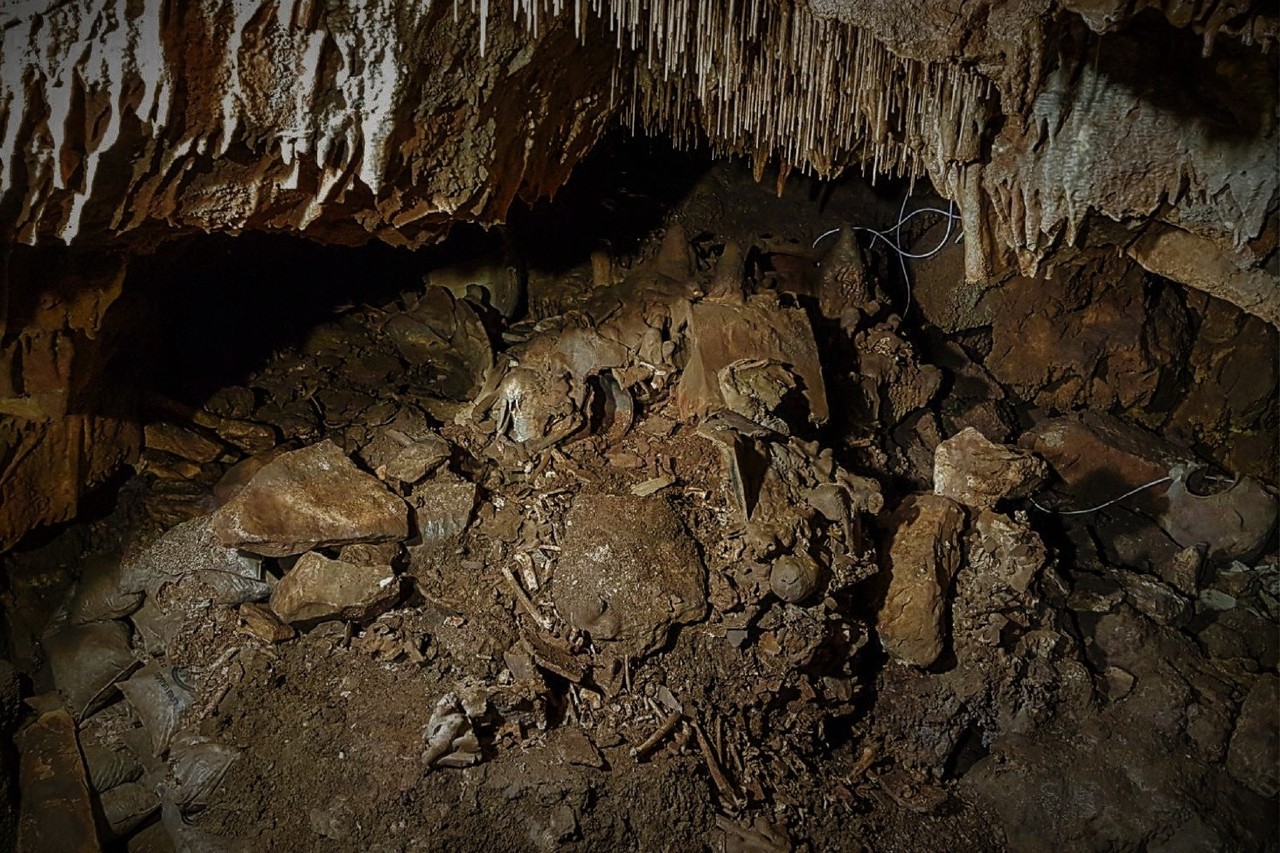 What were blue eyed people doing in Northern Israel 6,500 years ago?

A large-scale genetic study of the ancient population of Peqi'in revealed that the Chalcolithic culture in the region developed by waves of migration from Anatolia and the Zagros mountains about 6500 years ago. This study was carried out by an international team of researchers led by Dr. Hila May and Prof. Israel Hershkovitz from the Sackler Faculty of Medicine, Tel Aviv University, Dr. Dina Shalem from the Institute for Galilean Archaeology Kinneret College and the Israel Antiquities Authority, and Éadaoin Harney and Prof. David Reich of Harvard University.