Are marine embryos ready to respond to climate change?

Our work aims to bridge the gap between Ecology and Evolutionary Developmental Biology (EvoDevo) to better understand how developmental genetic programs of marine animal embryos respond to biotoxins derived from harmful algal blooms, a step to better understand how climate change may affect marine food webs and ultimately Ocean’s health.
Cristian Cañestro
Professor, University of Barcelona
Follow
Liked by Patrick Goymer and 1 other

Our article by Nuria Torres et al. published in Communications Biology is the first work from a new research line we recently started in our laboratory @evodevogenomeUB that aims to bridge the fields of EvoDevo and Ecology. The final goal of this project is to better understand whether developmental programs of marine embryos are ready to respond and adapt to environmental hazards, especially those affecting ocean’s health in the context of climate change.

Next, I will explain the story behind the paper of how we embarked in this new EcoEvoDevo venture.

The main research lines of our group focus on the origin and evolution of our own phylum, the chordates, and the impact of ‘gene loss’ as an evolutionary force. In particular, we study the development of the zooplanktonic marine chordate Oikopleura dioica, which as an appendicularian urochordate represents the sister group of vertebrates. Despite the profound process of morphological simplification suffered during the evolution of this tiny animal (about 2 millimeters), and the extensive gene losses that have accompanied the extreme compaction of its genome (65 Mb, much smaller than the 3,200 Mb in humans or even the 100 Mb in C. elegans), this animal still displays the typical body plan that characterizes all chordates, including a notochord, a dorsal neural tube, a post-anal tail, and many other homologous structures to vertebrate organs such as a heart or a thyroid, helping therefore to illuminate the origin and evolution of chordates.

Oikopleura dioica specimen inside its house full of microalgae

In our laboratory, we pioneer the study of this organism as an animal model to better understand the impact of gene loss on animal evolution. During our studies, the finding that essential genes had been lost in O. dioica has made us to reconsider the roles of those genes. In other words, imagine that we discovered a car with no wheels. This would make us to rethink  the essentiality of wheels for car movement, and would lead us to look for alternatives that could facilitate movement in the absence of wheels (which until then may have passed unnoticed because of the presence of wheels). Among the examples of gene losses we are studying, we have discovered the co-elimination of several genes that has caused the loss of retinoic acid (RA) signaling. RA is an important derivative from vitamin A (retinol, which can be obtained from carrots and other vegies) that plays essential roles in all chordates. During development, RA acts as a morphogen establishing embryonic axes, eyes and limbs, and in adults, it regulates cell proliferation during tissue homeostasis related for instance to visual, reproductive, circulatory and locomotive systems. The striking finding that O. dioica happened to be the only chordate known so far without RA-signaling has prompted us to study heart and muscle development in what can be considered an evolutionary-knockout chordate model for RA.

The 7th International Urochordate Meeting held in Naples (Italy) in 2013 can be considered the starting point of our EcoEvoDevo venture when we met the scientists that became our Italian collaborators from the Stazione Zoologica Anton Dohrn. While studying the effects of diatom-derived biotoxins in the development of urochordate ascidians, they found evidence suggesting that those biotoxins might interfere with RA-signaling during embryo development. To test that hypothesis, we came up with the idea of investigating if the development of the appendicularian O. dioica was resistant (or not) to those biotoxins according to its knockout condition for RA. This emerging new project also seemed to us highly relevant from an ecological perspective since appendicularians (a.k.a. larvaceans) are considered the second most abundant component after copepods in marine mesozooplankton, and play a central role in marine food webs. Appendicularians graze about 10% of the ocean’s primary production. The capability of appendicularians to trap a wide range of particle sizes thanks to their unique filter-feeding “house” makes them to occupy an important trophic position in food webs by acting as a short-circuit that allows a rapid energy transfer from colloidal carbon and phytoplankton primary producers to zooplanktivorous predators such as fish larvae. Moreover, the discarded houses full of organic material contribute to at least 8% of the vertical carbon transport from the surface to the deep ocean, being therefore involved in the carbon cycle and consequently relevant to global warming. This project seemed to us as an important first step to better understand the potential effect of increased amount of biotoxins derived from harmful algal blooms on marine food webs and carbon cycle, especially upon the potential intensification of algal blooms that have been associated to ocean warming and acidification.

After the meeting, back in Barcelona, I convinced Nuria P. Torres-Águila, an undergraduate student that at time that had recently joined our group, to treat O. dioica embryos with biotoxins produced from different species of diatoms. Her first unexpected and exciting observations of embryonic abnormalities induced by the biotoxins can be considered the beginning of this research line. Most results of this work were produced by Nuria during her undergraduate final degree project and her master, and her dedication and motivation were essential for the success of this project. Of course this work would have never been possible without the close supervision of Dr. Ricard Albalat and the kind contribution of many other members of the lab (Josep Martí-Solans, Alfonso Ferrández, Alba Almazán) who shared with her many still unpublished data.

Nuria P. Torres-Águila and Josep Martí-Solans collecting plankton samples in the coast of Naples, and myself with Dr. Giovanna Romano, Dr. Anna Palumbo and Dr. Salvatore D'Aniello in the Stazione Zoologica Anton Dohrn during the course of the project.

Our study in O. dioica reveals that diatom-derived biotoxins can cause dramatic developmental alterations independently of RA-signaling, inducing a "golf ball" phenotype affecting embryo morphogenesis, midline cell convergence and tail elongation. Importantly, the fact that development was compromised even at concentrations in the same order as those measured in the field after some diatom blooms puts an alert on the potential impact that an increase of biotoxins may have on marine food webs. This alert is especially relevant under a conceivable increase of the frequency and severity of harmful algal blooms related to ocean warming and acidification.

Another important finding from our work is the fact that the developmental genetic program of O. dioica has the capability to respond to environmental stress. Upon the presence of diatom-derived biotoxins, we observed a broad silencing and delay of zygotic transcription of extensive developmental genes during early stages, and the upregulation of the defensome genes (set of genes that protect the cell against environmental insults), even at innocuous concentrations at which we did not observe any embryonic alteration. Our results suggest that the silencing and delay of zygotic transcription of developmental genes, and the upregulation of defensome genes might be part of a response mechanism that embryos might have evolved that protects them against environmental hazards. Our work. moreover, points to defensome genes as potential molecular biosensors that marine ecologists could use to monitor the genetic stress of natural populations of appendicularians (and probably other organisms) exposed to algal blooms in their habitats, and ultimately to assess the potential impact of increasing blooms associated to climate change.

Currently, our laboratory continues with this new EcoEvoDevo research line investigating the responses of the developmental program to environmental steps using transcriptomic approaches, strengthened by the expertise of Dr. Vittoria Roncalli, a molecular ecologist postdoc that recently joined our team. Please, follow us @evodevogenomeUB to stay tuned with our latest progress of this EcoEvoDevo venture. 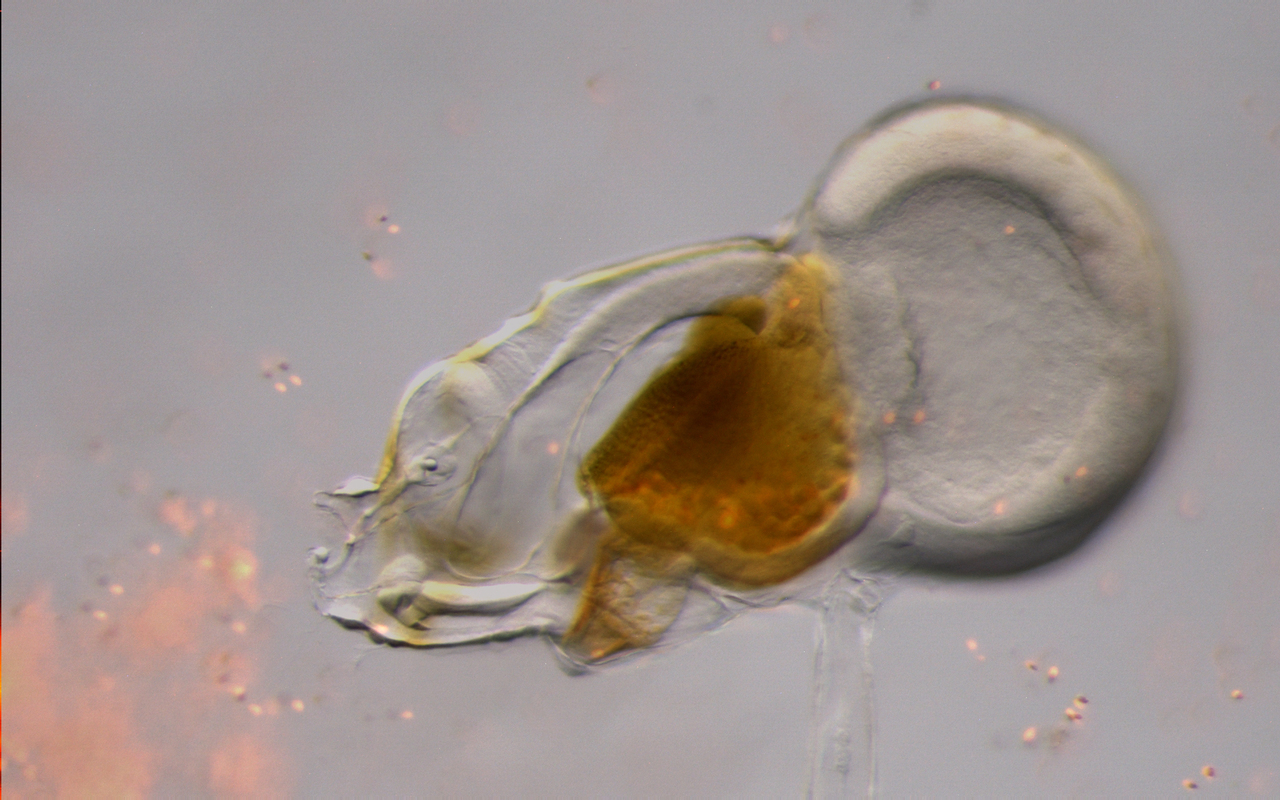 Are marine embryos ready to respond to climate change?