It takes a global village to write one paper – and nearly 20,000 hours of work to collect the data!

Our findings published today in Nature indicate that the traits of tundra plant communities, despite differing across biome-wide climate and soil moisture gradients, are not changing rapidly with warming… except for plant height. By Isla H. Myers-Smith, Anne D. Bjorkman and Sarah C. Elmendorf
Anne Bjorkman
postdoctoral scholar, Senckenberg Biodiversity and Climate Research Centre
Follow
Like Liked by Patrick Goymer and 6 others
0

You know the saying ‘it takes a whole village to raise one child…’, the same could be true of writing a scientific paper. Sometimes the most exciting scientific questions can only be answered with huge amounts of data, and putting together those data requires a very big team of collaborators. Our study of functional trait change across the tundra biome, published this week in Nature, is a perfect example of the kinds of big-scale questions we can explore when 130 scientists from around the world work together.

The very jolly sTundra working group pictured at our first working group at the German Centre for Integrative Biodiversity Research (iDiv) - this group is only a part of the many contributors to this study.

The Arctic and alpine tundra are the most rapidly warming parts of the planet, but until recently plant trait data across this vast temperature-limited biome were lacking from global analyses. As a result, we had very little understanding of how climate shapes patterns in plant functional traits over space nor the speed with which traits are changing over time at the tundra biome scale. Plant traits are a critical link between vegetation change and ecosystem functions such as carbon storage and surface energy exchange. To quantify climate feedbacks, we need to understand climate-trait relationships.

There is great beauty to be found when you get up close and personal with tundra plants. Here, the seeds of Dryas integrifolia (Mountain Avens) twist as they develop. Photo credit: Anne D. Bjorkman

Our study found that although many traits of the vegetation vary with climate over space, only community-level plant height has been increasing rapidly over time. Much of the community-level change we observed was due to new species entering long-term monitoring plots, rather than just changes in the abundance of resident species. For other plant traits, such as specific leaf area and leaf nitrogen content, soil moisture played a strong role moderating the strength and direction of temperature-trait relationships.  Our results help inform projections of the rate at which tundra ecosystems will responding to warming, and thus contribute to global climate feedbacks. 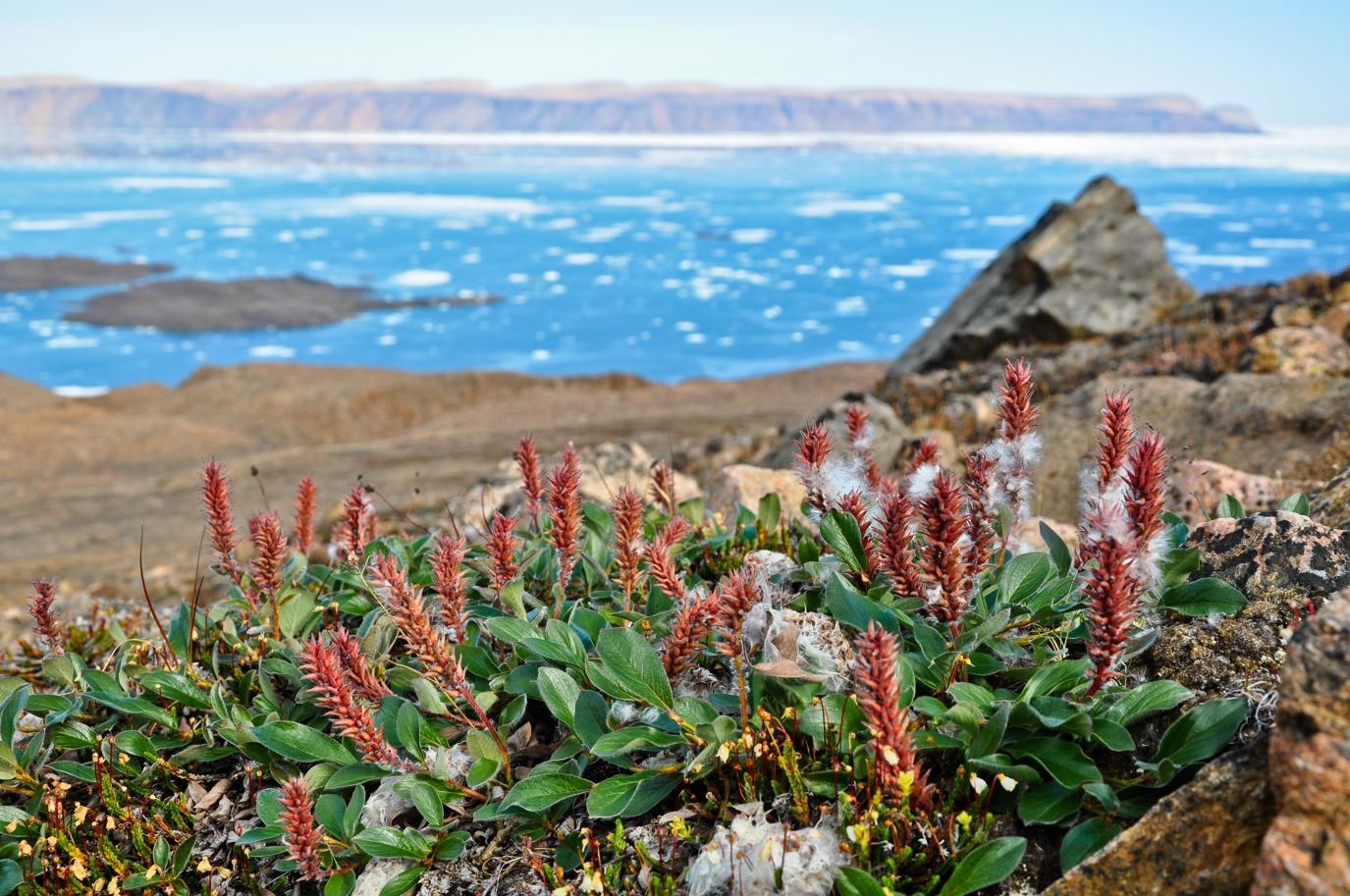 Taller species like this Salix arctica (Arctic willow) are increasing in the rapidly warming tundra biome, leading to an increase in the height of tundra plant communities. Other key plant functional traits have not responded to warming despite strong relationships between climate and traits across spatial temperature gradients. Photo credit: Anne D. Bjorkman

Answering biome-scale questions about how tundra plant traits are responding to climate change requires information on changes in community composition at sites across the tundra biome combined with multiple trait observations for nearly every tundra species. Building such massive datasets requires many, many collaborators. This is what we set out to do by forming what we affectionately call the Tundra Trait Team through the sTundra working group of the German Centre for Integrative Biodiversity Research (iDiv). The Tundra Trait Team is a collaboration of over 100 scientists from dozens of countries all around the world, all of whom have collected data on the traits of tundra plant species. Combined with data contributed by members of the already-established TRY trait database our study includes exactly 56,048 trait records and community composition observations from 1,520 plots at 117 sites recorded across three decades as a part of the International Tundra Experiment and related efforts. 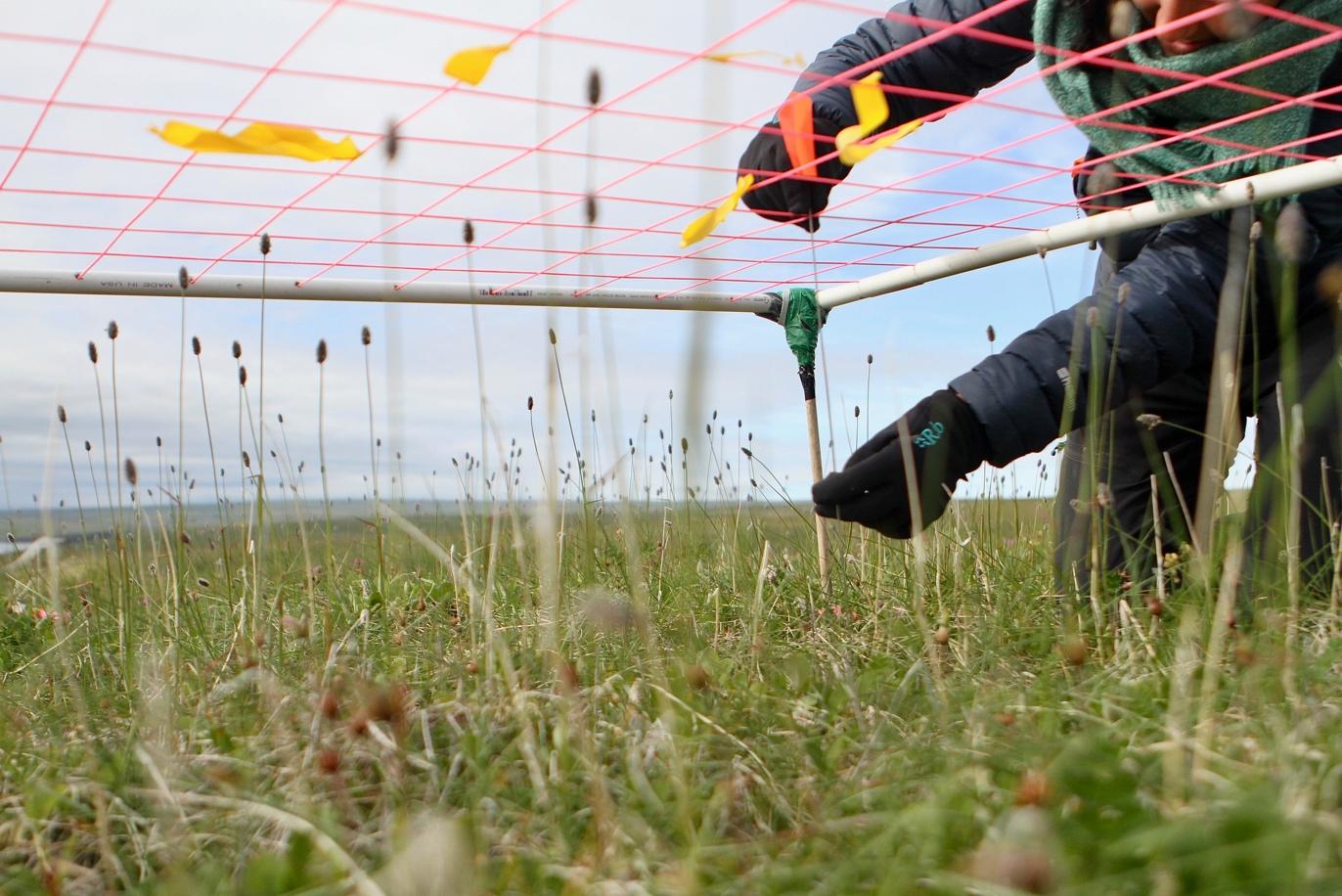 On Qikiqtaruk – Herschel Island, we have observed a localized expansion of the grass species Alopecurus alpinus from the wider species pool (pictured here). This species was originally absent from the long-term plots and has increased the canopy height of the plant community more than four-fold over the past 20 years. Photo credit: Mariana García Criado and Gergana N. Daskalova

Our co-authors and collaborators were a generous lot!  We wondered: If it took 26’950 km of hiking to collect 302 data points, how long does it take to collect over 606,748 data points (depending on how you count it)? 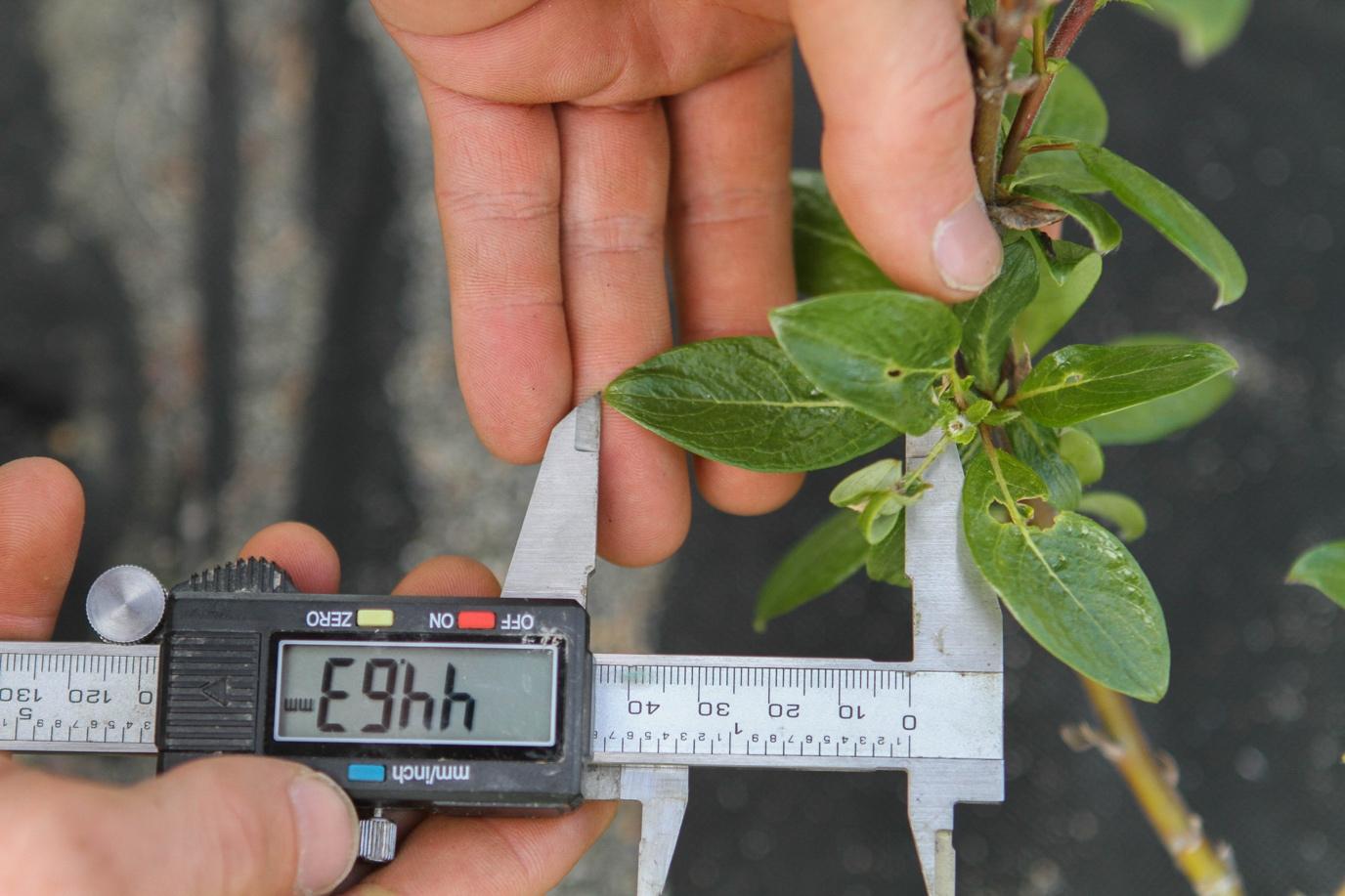 Plant traits encompass observations from plant height and leaf area to wood density, seed size, leaf chemistry, plant growth form and beyond.  Together all of these individual trait records help us understand how the form and function of plant communities change across climate gradients and over time. Photo credit: Gergana N. Daskalova

We estimated it takes on average 20 min to collect a trait record (probably much shorter for a plant height record or much longer for specific leaf area or wood density) and roughly one hour to monitor a community composition plot (depending on what method you use and the species diversity and canopy complexity of your site – some sites take over two hours per plot!). That adds up to 18,683 hours to collect the trait records and 4575 hours to collect the community composition data or together 1938 12-hour days of work (or over five years of the life of a plant ecologist or ~180 hours per co-author on our study). And that is not including the travel time to remote tundra locations, the five years of hard work it took to compile these data and conduct our analysis …and, well, you could keep counting. 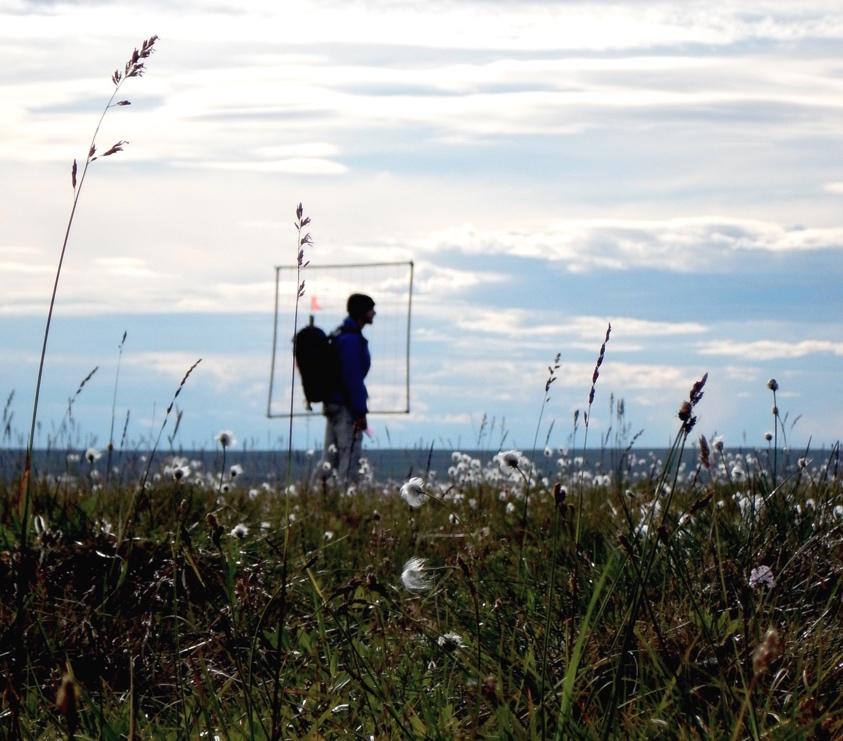 Point-framing, the method recommended by the International Tundra Experiment protocols to measure community composition, is a painstaking and meditative activity – some love it and some hate it, but the data that result quantify how tundra plant communities are changing over time and responding to warming temperatures. Photo credit: Isla H. Myers-Smith

In summary, it takes an global village of researchers and nearly 20,000 hours to compile a dataset that spans the entire tundra biome and a consecutive decade of work to write one paper. When most of these data were originally collected, this particular study was not yet dreamed up. The data we collect every day as field ecologists have long-term value beyond this year’s or next year’s analysis. Sharing data and making them public ensures the hard work that went into data collection continues to yield scientific insight decades later.

In our second working group at iDiv, we are literally jumping for joy at all the tundra trait data that we were able to compile! 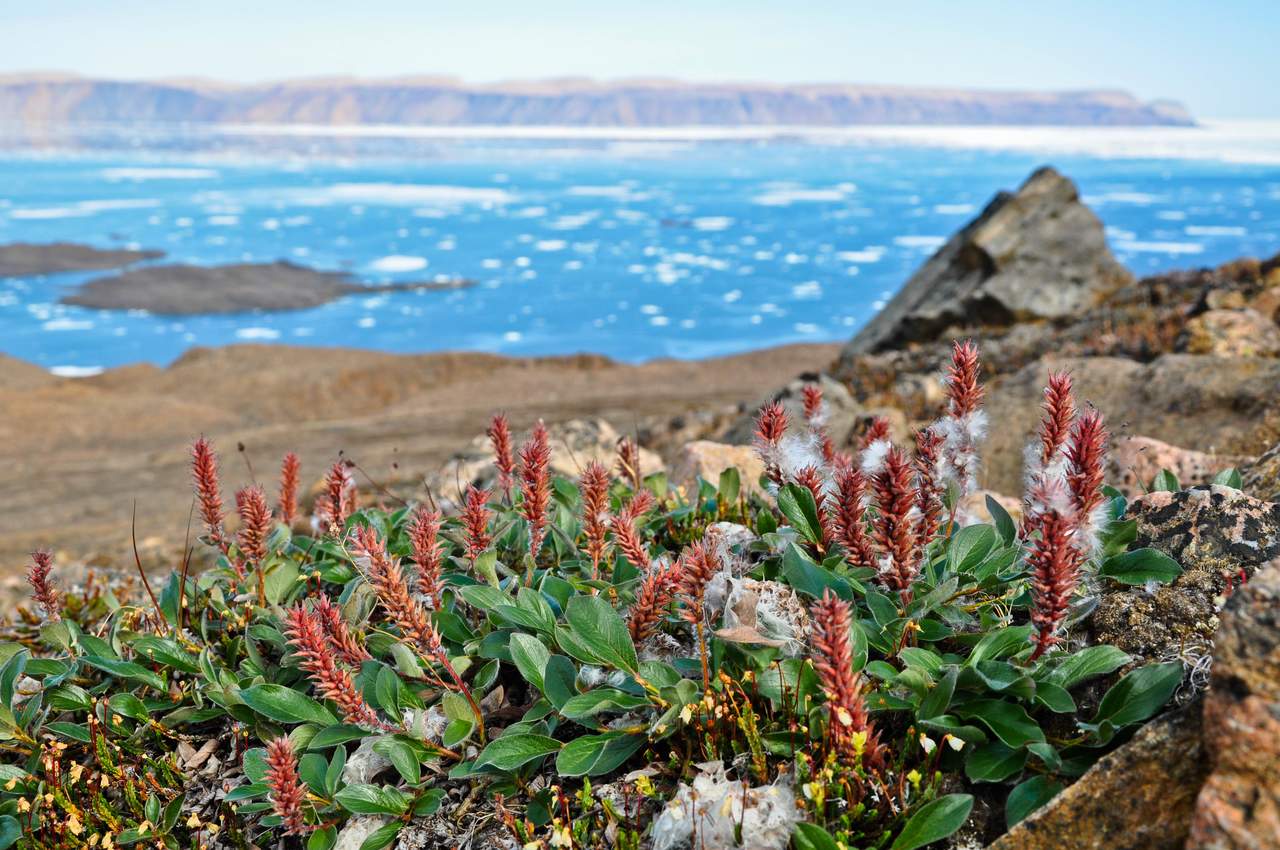 It takes a global village to write one paper – and nearly 20,000 hours of work to collect the data!

Our findings published today in Nature indicate that the traits of tundra plant communities, despite differing across biome-wide climate and soil moisture gradients, are not changing rapidly with warming… except for plant height. By Isla H. Myers-Smith, Anne D. Bjorkman and Sarah C. Elmendorf