Phototrophic microbial mats were the forests of the Precambrian and witnessed the transition to an oxygenated atmosphere at the onset of the Proterozoic. By studying core functional genes in metagenomes of modern microbial mats across redox gradients, it might be possible to infer the metabolic transitions that occurred in the early Earth.

Before animals and plants diversified and colonized the surface of our planet, terrestrial ecosystems were exclusively microbial. For around three billion years, phototrophic microbial mats occupied an analogous place to that of modern forests, fixing inorganic carbon via photosynthesis and hosting complex trophic interactions among organisms with different energy and carbon metabolisms. Early bacterial photosynthesis was likely anoxygenic. Oxygenic photosynthesis, which evolved in cyanobacterial ancestors, triggered the most critical environmental change the Earth has ever witnessed: the oxygenation of the atmosphere. Oxygen is dangerous. Some organisms learned how to protect from it and used it for aerobic respiration. Many others had to avoid it and were confined to anoxic settings.

The Great Oxidation Event (GOE) that occurred at the Archaean-Proterozoic transition induced important metabolic changes in early microbial ecosystems. However, those metabolic transitions have remained inaccessible for scientific study so far. In our Nature Ecology and Evolution article (http://www.nature.com/articles/s41559-018-0683-3), we argue that the study of functional shifts in modern phototrophic mats across redox boundaries might mimic the metabolic transitions experienced during the GOE. We thus applied a space-for-time substitution approach to infer core metabolic functions in metagenomes of microbial mats across a redox gradient. The spatial distribution and relative abundance of core metabolic genes allow us to hypothesize two things. First, although anoxygenic photosynthesis was present before, it diversified in different microbial lineages and expanded in parallel to cyanobacterial oxygenic photosynthesis. Second, the Wood-Ljungdahl pathway was the early dominant carbon fixation pathway but the Calvin cycle displaced it after the GOE.

Today, thick phototrophic microbial mats are often restricted to extreme environments, such as geothermal or hypersaline areas. For our study, we collected microbial mats from one pond in the Salar de Llamará, one of the many ‘salares’ or salt flats that occur in the Atacama Desert, Chile. One of the driest deserts on the planet, Atacama also experiences high diurnal temperatures and, because of its average altitude (around 3,000 m), high ultraviolet irradiation. Shallow ponds and lakes can form in the ‘salares’ depending on the groundwater table. During our field trip, we observed many diverse small ponds at Llamará. We focused our sampling effort in one of them, which we called LLA9 and harboured colourful microbial mats.

We did a series of physico-chemical measurements in situ and realized that the pond was stably stratified, with a chemocline that separated upper oxygenated from deeper anoxic waters. A perfect redox gradient to collect our mats!

Accompanied by geologists and geochemists, we visited several ‘salares’ during that field trip. Some look so desolate that it is difficult to conceive that even extremophilic microbes can thrive below the salt crusts.

These extreme places can be treacherous. Groundwater can sometimes dissolve the salt below the ground, leading to salt pan collapse and blocking the only viable way… In some areas, salt fragments cut like broken glass… with a similar effect on tires!

Traveling through these incredible landscapes is so evocative that one can easily imagine being on another planet or… on the early Earth. Until geoglyphs on a slope remind us that humans colonized these seemingly inhospitable places long ago. 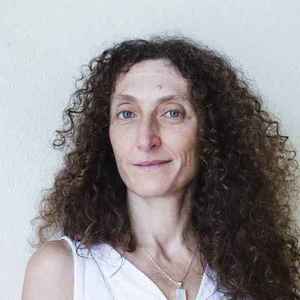