By Patrick Roberts and Mathew Stewart - How did different hominin populations adapt to new environments during their migrations beyond Africa? We sought to investigate this in the desertic regions of the Arabian Peninsula by reconstructing the environments associated with the earliest traces of hominins in this part of the world. Stable isotope evidence from fossil animal teeth indicates hominins moved into a ‘Green Arabia’, surrounded by lush grassland vegetation and aridity levels approximating those of open eastern African savannas today.
Patrick Roberts
Group Leader of the Isotope Laboratory, Department of Archaeology, Max Planck Institute for the Science of Human History
Follow
Like Liked by Patrick Goymer
0

While often equated with ‘humans’, the term hominin refers to a variety of genera and species, including Ardipithecus ramidus, Australopithecus afarensis, Homo erectus, as well as our own species Homo sapiens, all of which exhibit some form of adaptation to bipedal walking on the ground. When considering what makes us ‘human’, we would argue that we have to ask what makes us Homo sapiens, a species that evolved in Africa sometime between 300 and 200,000 years ago distinct from these other hominin groups. It has recently been argued that Homo sapiens occupied a diversity of extreme environments, including deserts, tropical rainforests, arctic, and high-altitude settings, around the world. By contrast, other earlier and contemporaneous hominin species, such as Neanderthals and the recently discovered Homo naledi, appear to be associated with generalized use of different forest and grassland mosaics.

Often hominin fossils, and indeed hominin genomes, have been described without associated information relating to past vegetation or precipitation, making it difficult to systematically test the hypothesis that our species is ecologically unique. At the site of Ti’s al Ghadah in northern Saudi Arabia (Figure 1), we uncovered the earliest remains of hominin activity on the Arabian Peninsula in the form of buried stone tools and possible cut marks on animal bones dated to between 500 and 300,000 years ago. Furthermore, these archaeological remains were directly associated with a variety of fossil animals, including extinct elephants (Palaeoloxodon recki), large jaguar-like felines (Panthera gombaszoegensis), hartebeest (Hippotragus gigas) and horses (Equus sp.). While some animals, such as waterfowl, indicated the past presence of reliable water in what is today a desert, arid-adapted animals such as camel (Camelus sp.) and oryx (Oryx sp.) implied a more complicated picture.

Stable carbon isotope analysis of fossil herbivore tooth enamel has been shown to document the types of vegetation being consumed by an individual. Meanwhile, stable oxygen isotope analysis of different types of animals, and specifically by comparing animals that are required to drink water with those that are not, can provide insights into how arid a region was in the past. By taking multiple samples from a single tooth we can also gain insights into how these environments fluctuated on monthly to yearly scales. Importantly, in the case of Ti’s al Ghadah, we could undertake these studies in a way that would allow us to link the resulting information directly with some of the earliest recorded hominin populations arriving in the Arabian Peninsula, allowing us to test the degree to which our relatives were forced to adapt to new conditions in what is today a highly challenging place for human occupation.

The stable isotope findings demonstrate that animals were feeding almost exclusively on grasses, and that aridity levels were somewhat similar to those found in East Africa ‘savanna’ settings today. This indicates the availability of significant amounts of water at certain points in time, which is consistent with the fossil animals recovered from the site, and a potential connection between numerous lake systems. The information from Ti’s al Ghadah and elsewhere indicate that early dispersing hominin populations would have been able to extend not only into the Levant, but deep into the Arabian Peninsula, alongside various African and Eurasian mammals in similar grassland habitats. While these early hominin populations may have possessed significant cultural capacities, their movement into this part of the world would not have required adaptations to harsh, arid deserts.

By contrast, while also requiring the formation of a ‘Green Arabia’ to some extent, our own species, Homo sapiens, appears to have had a wider geographic spread in Arabia than these earlier hominins, and lived under much harsher conditions than their predecessors. Recent research in the Kalahari and Namib Deserts of southern Africa have also found that Homo sapiens adapted to limited water availability in these arid regions. More detailed study of past environments, closely associated with different forms of hominin species in different parts of the world, should allow continued testing as to whether our species was unique in its ecological flexibility. In turn, comparable environmental datasets, alongside traditional focus on cultural artefacts and fossil remains, can begin to trace the point at which we became ‘human’ and developed the current diverse ecological niche that has taken us across the world’s continents and even begun to modify them beyond all recognition.

This work would not have been possible without a diverse international consortium of researchers headed by the Max Planck Institute for the Science of Human History, in partnership with HRH Prince Sultan bin Salman and the Saudi Commission for Tourism and National Heritage. Additional partners include the Saudi Geological Survey, King Saud University and other key institutions in the United Kingdom and Australia.

Some of the excavation team uncovering animal fossils at the site of Ti's al Ghadah, Saudi Arabia in back in 2013. A large extinct elephant tusk (Palaeoloxodon) is clearly visible in the sands. The map showing the site can be found inside the main paper. Credit: Palaeodeserts Project (Huw Groucutt) .

The current desert environment surrounding Ti's al Ghadah. Two researchers can be seen standing atop the ancient lake deposit. Was it the same in the past? Credit: Palaeodeserts Project (Huw Groucutt).

An example of a fossil animal found at the site. This here is a molar of an extinct elephant (Palaeoloxodon), a species that went extinct sometime during the middle Pleistocene. Credit: Palaeodeserts Project (Huw Groucutt).

Behind the paper: Persistent tropical foraging in the highlands of terminal Pleistocene/Holocene New Guinea 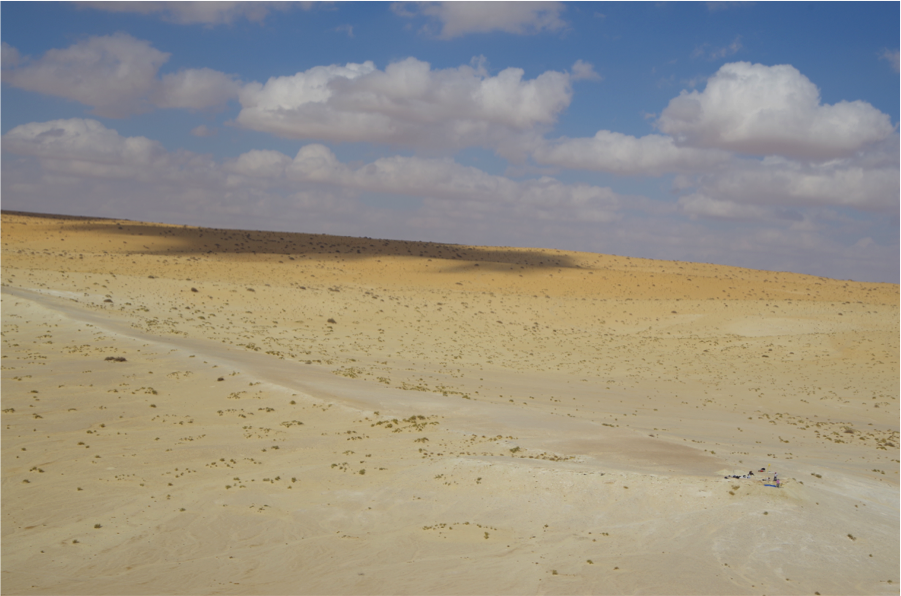 By Patrick Roberts and Mathew Stewart - How did different hominin populations adapt to new environments during their migrations beyond Africa? We sought to investigate this in the desertic regions of the Arabian Peninsula by reconstructing the environments associated with the earliest traces of hominins in this part of the world. Stable isotope evidence from fossil animal teeth indicates hominins moved into a ‘Green Arabia’, surrounded by lush grassland vegetation and aridity levels approximating those of open eastern African savannas today.