Birds are dinosaurs, a fact now accepted as mainstream science. Exactly how did the dinosaur-bird transition occur is now being investigated down to the details of the embryological processes involved. The head is an interesting and problematic region for researchers of bird evolution, since it is very different from that of their ancestors among extinct predatory dinosaurs. Birds have no teeth, have huge brains, enormous eyes, and paper-thin bones that are fused together in adults.

Important to our paper, birds have less bones in their adult skulls than most dinosaurs had, having lost the postorbital and prefrontal bones, formerly located behind and in front of the eye socket, respectively.

Recent embryological studies in mammals have discovered that skull bones long lost in evolution are still formed, but fuse seamlessly to other embryonic bones at a very early stage. We tried to resolve if the lost prefrontal and postorbital of birds could have undergone a similar fate, by studying early ossification patterns in different bird species. We found this was the case: the “lost” postorbital and prefrontal bones of birds develop in the embryo, but quickly fuse to other elements, becoming undetectable in the adult skull. 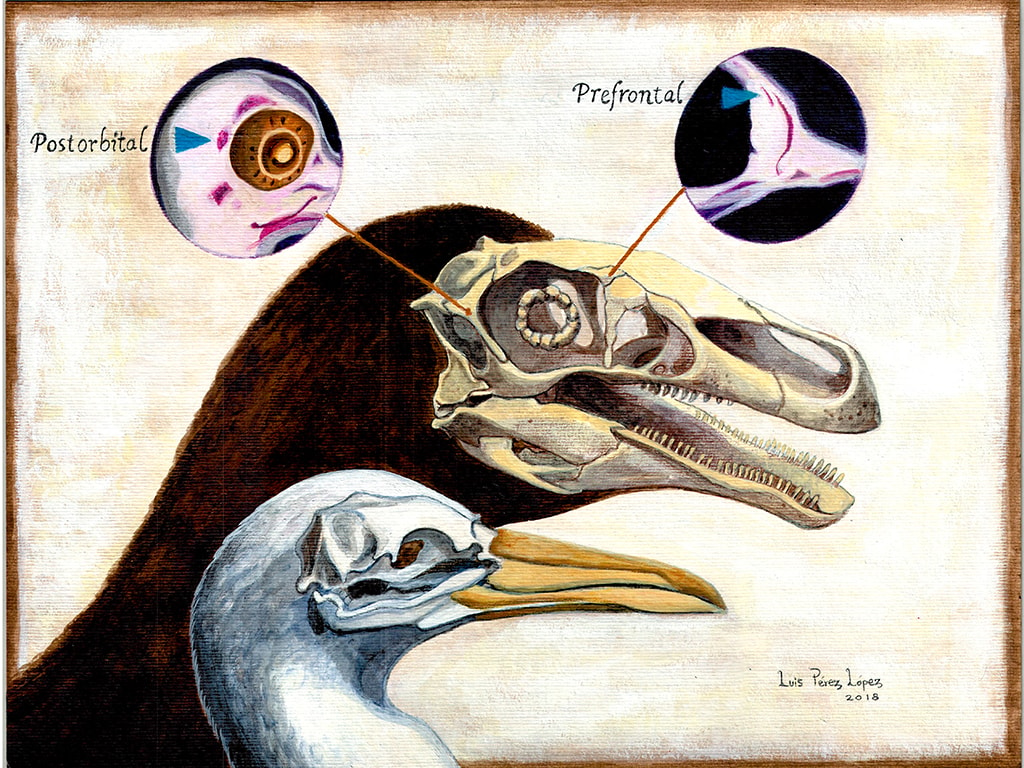 Since, before fusion, these bones still develop separately, they must have also done so in ancient birds and bird-like dinosaurs, even if they were already absent in the adult skull. Indeed, we found the prefrontal was present in some fossil specimens that are phylogenetically nested among taxa with no adult prefrontal.  This confirmed the prefrontal must have continued to form separately, occasionally failing to fuse to other bones. In closely related forms with no prefrontal, the shape of the lacrimal betrays its fate: It shows a projection exactly where the prefrontal should be, suggesting both bones have fused.

This is remarkable because in modern birds, the prefrontal fuses to a different bone, the nasal.  Considering all data, we concluded that the prefrontal switched, from fusing to the lacrimal in ancient forms, to fusing to the nasal in modern forms. By reviewing similar cases reported for vertebrate evolution, we argue that persistent embryonic modularity (continued formation as an independent element) allows for the de-construction and re-assembly of old and new composite elements in evolution. This concept is illustrated by the schematic figure below.

Our study also helped answer another question related to bird evolution. Only in birds, the large bone forming on top of the forebrain and above the eye socket (the frontal bone) develops from a mixture of two sources: the front of the bone from the outer (ectodermal) cells of the embryo, and the back, from inner (mesodermal) cells. Normally, this bone would be derived entirely from the ectoderm. This has led to misunderstandings regarding which parts of the frontal, and other bones of the skull, correspond to which bones of other reptiles. We discovered that the ossification centre that in embryonic birds makes up the back of the frontal corresponds to the postorbital, uncovering the identity of its mesoderm-derived portion. These ossifications are shown in successive stages of duck embryos below.

Intriguingly, this is similar to what happened in mammals, where two bones with different embryonic origins fused together to make up a single bone. Mammals and birds are also both characterized by their big brains and modified skull. These similarities might point to a more interesting pattern and similar evolutionary mechanisms. Maybe, fusing bones is the common response of the skull to brain expansion. We still don’t know anything about the mechanisms behind the fusion of early ossification centers in the embryonic skull: studying them is an exciting next step.

Our paper in Nature Ecology and Evolution can be found here: