The African finch Pyrenestes is unique among birds in showing a non-sex-determined polymorphism in bill size and is considered a textbook example of disruptive selection. We use genome-wide pooled sequencing to explore the underlying genetic basis of bill morphology and identify a single candidate region. Our results show how a single genetic factor may control bill size and provide a foundation for future studies to examine this phenomenon within and among avian species.
Thomas Smith
Professor , UCLA
Follow
Like Liked by Patrick Goymer
0

Our paper in Nature Communications can be found here: Growth factor gene IGF1 is associated with bill size in the black-bellied seedcracker Pyrenestes ostrinus

One of the most fundamental questions in evolutionary biology is how variation is maintained in natural populations. Of particular interest are the mechanisms that produce and maintain discrete phenotypic variation within a species, collectively referred to as polymorphisms. In resource polymorphisms, trait variation is associated with resource acquisition. Clear examples are found in fishes, where morphs may vary in jaw size and shape critical to feeding. Numerous theoretical and empirical studies have shown how polymorphisms may be important stepping stones toward speciation. For example, this might happen if a trait in one morph associated with feeding on a specific food leads to associative mating and eventually reproductive isolation. Despite the ubiquity of non-sex-linked polymorphisms in nature, however, it’s been challenging to fully understand the ecological and evolutionary factors that may give rise to and maintain them, and even more difficult to understand the genetic basis of such variation and the genes involved. Now, after more than 35 years of research, a full picture for one species is coming into focus.

Field research in the early 1980s in Central Africa showed the black-bellied seedcracker (Pyrenestes ostrinus), a 30-gram species of African finch, is unique among birds in exhibiting a dramatic polymorphism in beak size. Beak sizes were found to be bimodally distributed, and not determined by age, sex, body size or geographic origin. Astonishingly, morphs from single interbreeding populations showed beak size differences as large as those seen between different species of Darwin's Finches (Geospiza spp). Morphs were found to have divergent diets and feeding efficiencies on their principal food, sedge seeds (Scleria), with small-billed birds specializing on softer-seeded species than the large-billed birds. The seedcracker is now considered a textbook example of disruptive selection in the wild in which intraspecific niche partitioning has arisen through a single trait polymorphism. Yet, the mode of inheritance and genetic basis of the trait was entirely unknown.

In the 1990s, captive breeding studies were initiated with finches imported from the southern rainforests of Cameroon. These studies determined that the differences between small- and large-billed morphs were consistent with a single, autosomal (non-sex linked) genetic factor, with the large-billed phenotype dominant over the small-billed. With a substantial understanding of the ecology and evolution of the polymorphism and inspired by the discovery of candidate genes controlling bill size in Darwin’s finches, we turned our attention toward uncovering the possible gene(s) involved.

We quickly confirmed that a single candidate region does indeed correspond to the two bill sizes. However, due to the strong linkage disequilibrium within this region combined with high divergence between the small- and large-bill alleles, narrowing down the genetic region required considerable effort that involved extensive sequencing. The single most likely candidate gene contained in the target region is the insulin-like growth factor 1 (IGF1). Changes in IGF1 activity are known to be responsible for biological scaling in the size and shape of vertebrates. For example, a single IGF1 haplotype in domestic dogs is associated with small body size with the haplotype nearly absent in larger breeds. Notably, the large-billed allele does not appear to have originated as a chromosomal inversion, a genetic mechanism that could generate the high divergence and extensive linkage we observed within the candidate region.

Future work will examine a mega-billed morph, known to interbreed with the small and large morph, but associated with more extensive variation on the same chromosome, and to explore the role of IGF1 in the evolution of avian bill size and the diversification of birds more broadly.

Thomas B. Smith, University of California at Los Angeles

The promise of Humboldt's extraordinary scholarship 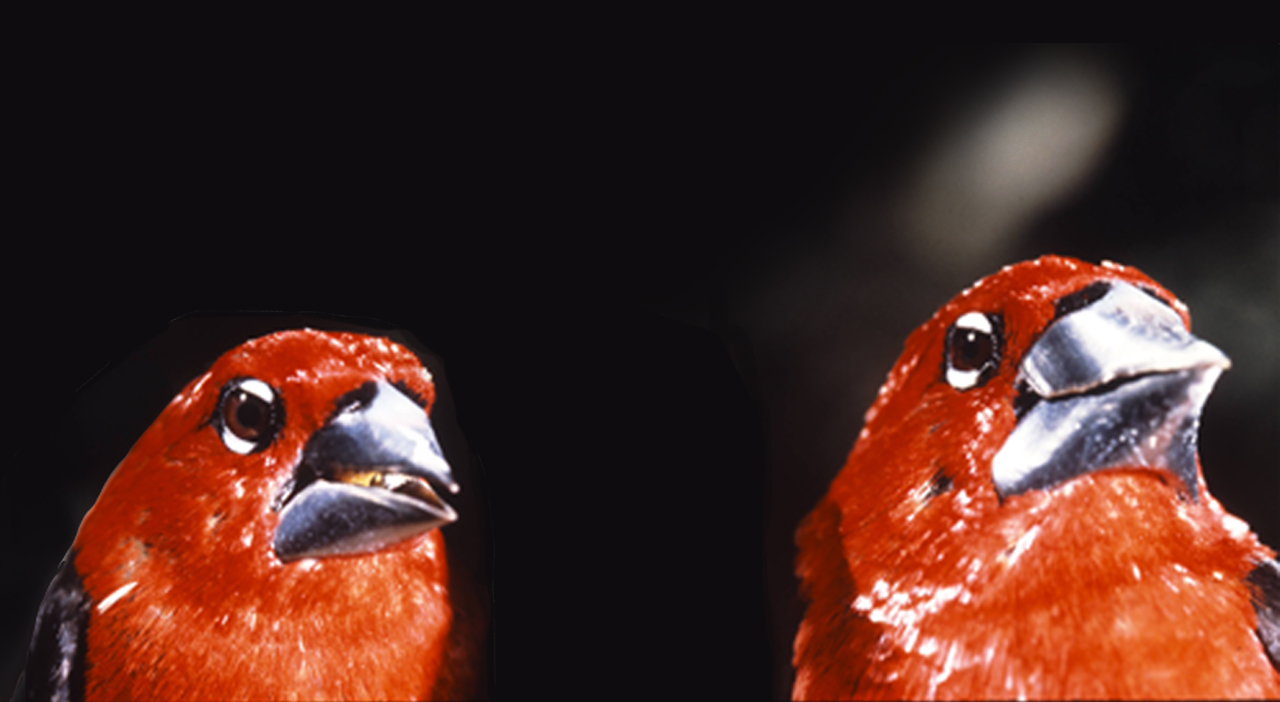 The African finch Pyrenestes is unique among birds in showing a non-sex-determined polymorphism in bill size and is considered a textbook example of disruptive selection. We use genome-wide pooled sequencing to explore the underlying genetic basis of bill morphology and identify a single candidate region. Our results show how a single genetic factor may control bill size and provide a foundation for future studies to examine this phenomenon within and among avian species.