Determining gender with certainty in a fossil organism (in which typically all that is preserved is skeletal remains) is notoriously difficult, unless of course the species has a baculum.
Jingmai K O'Connor
Professor, Field Museum of Natural History
Follow
Liked by Patrick Goymer

Determining gender with certainty in a fossil organism (in which typically all that is preserved is skeletal remains) is notoriously difficult, unless of course the species has a baculum. However, knowing gender can be very useful, allowing researchers to identify potential differences between the sexes (called sexual dimorphism). Medullary bone (MB) is a type of tissue today found only in female birds and only as they are preparing to lay eggs. It forms in the empty spaces within bones becoming a calcium reservoir the mother bird draws from when depositing eggshell. Laboratory experiments can cause MB to artificially form in male birds through estrogen injections but it cannot be made to form in the other group of living archosaurs (the group of reptiles to which birds and other dinosaurs belong), crocodiles and kin. Finding MB in a fossil means not only can you say the specimen is female, you can also say its reproductively active. This information can then be used to make inferences about the age of reproductive activity, different modes of body growth, whether species are actually sexually dimorphic, and a slew of other topics. Like other features that are, today, strictly ‘avian’, MB arose somewhere within the Archosauria, in a group that excludes the crocodylians.

MB has only recently been of intense interest to paleontologists interested in (osteo)histology. This began in 2005 with the startling discovery of purported MB in the large theropod dinosaur Tyrannosaurus rex. A dinosaur this size one wouldn’t expect should need MB, able to draw from the articular surfaces of the skeleton similar to crocodylians, whereas bird bones are so thin and hollow drawing calcium from the skeleton would presumably cause structural issues. Following this discovery, medullary bone-like tissues were reported in several dinosaurs spanning the entire known phylogeny, including gigantic sauropod dinosaurs. MB was even reported in two members of the Pterosauria, the dinosaur sister-group, also quite unexpected given that pterosaurs lay soft shelled eggs. The cumulation of these finds made one thing quite clear – not all medullary bone-like tissues are homologous to that in living birds. Pathologies can also produce similar looking tissues. Understanding potential MB is complicated by the fact most fossils used for histology are incomplete and/or only one or sometimes two bones are sectioned (a technique that is considered destructive). Pathologies tend to be local whereas MB is a systemic process, forming in many skeletal elements in modern birds. The bottom line - in no previous fossil is the case for MB strong enough to identify the specimen as female with absolute certainty.

This brings us to our discovery (https://www.nature.com/articles/s41467-018-07621-z). The specimen, consisting of a complete and articulated left leg, is a pengornithid, member of a basal clade of the group Enantiornithes, the dominant clade of land birds in the Cretaceous. Upon first glance it is clear the specimen is unusual. Its not crushed flat like most fossil birds collected from the Lower Cretaceous Jehol Group, which is exposed in northeastern China. We cut portions of the femur and tibiotarsus and prepared thin sections so we could study the bone tissue. These revealed that the 3D preservation of this specimen is most likely due to the presence of a thick layer of MB in these elements. Computerized-tomographic scans revealed that MB even extended into the toe bones, as it does in some living birds. While we feel this provides strong evidence that this basal group of birds utilized this specialized bone-tissue for eggshell formation, given our current level of understanding (or lack there of) of this unique reproductive tissue, in no currently available fossil (including this one) can we be absolutely sure about the identification of this unique tissue. This means there is no strong evidence that MB occurred in non-avian dinosaurs. Although many ‘avian’ traits are now being taken over by the dinosaurs, the current evidence suggests that maybe birds can have this one back. 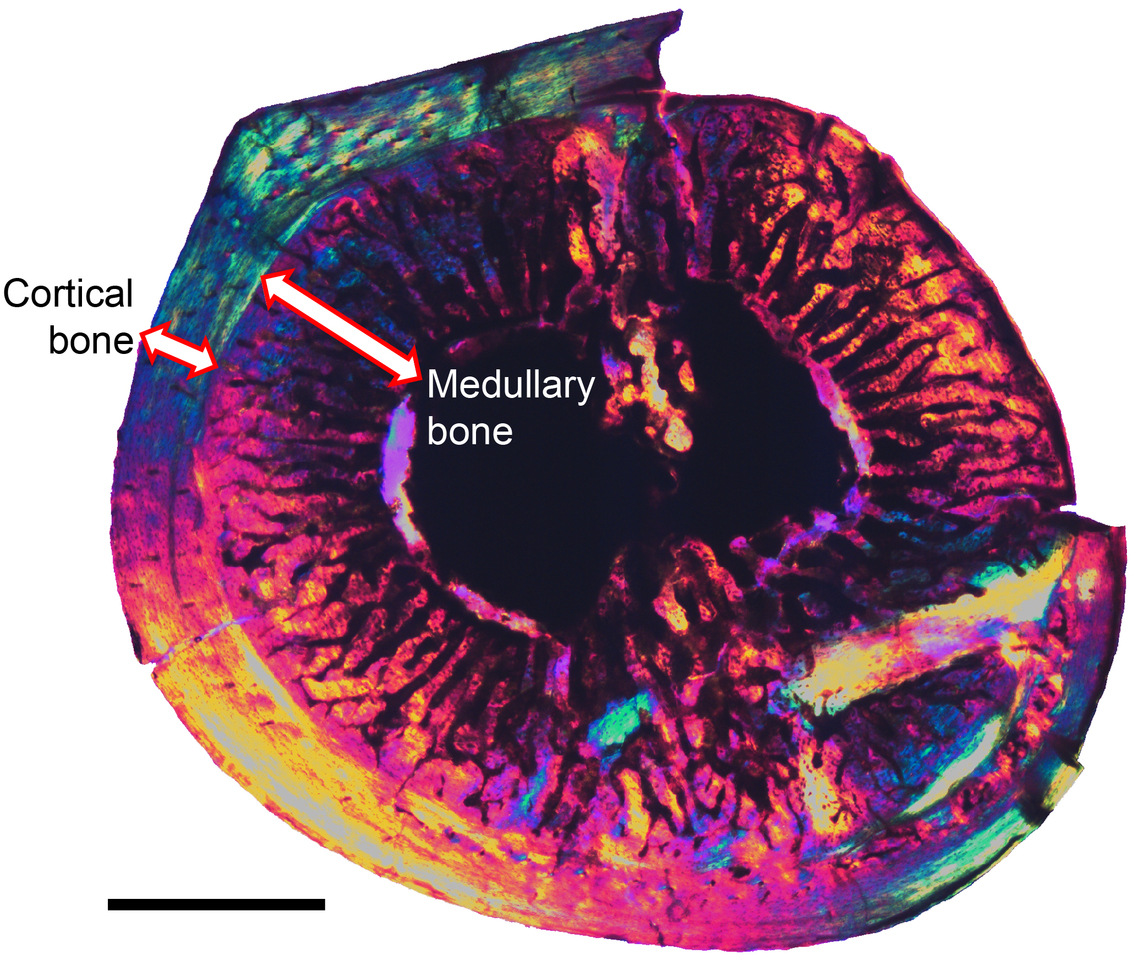 Determining gender with certainty in a fossil organism (in which typically all that is preserved is skeletal remains) is notoriously difficult, unless of course the species has a baculum.