In science, such as in life, things don’t always happen as you have planned and that is the amazing and beautiful part of it. Four years ago I started a PhD focus on the study of infectious Bacteria, but I couldn’t finish it for several reasons. Two years later than I left my first PhD, I had the chance to return to the science starting a new PhD in Ecology. As I didn’t want to fully abandon Microbiology, we decided to slightly modify the PhD topic to include this subject. That is how I started to study soil microbial respiration in drylands at different spatial scales.

The first experiment of this new PhD, from which this paper is derived, was a laboratory incubation. Specifically, we used 110 soils from different dryland sites distributed across all continents (Figure 1), spanning a gradient of mean annual temperatures (MAT) from -2 ºC to 28ºC. This soils were incubated at three different assay temperatures to evaluate soil microbial respiration response.

We focused our study in drylands for two main reasons. First, drylands, which include hyperarid, arid, semiarid, and dry subhumid ecosystems, cover 45% of Earth’s land surface1. Additionally, as they are highly vulnerable to environmental pressures, their global extent is expected to increase during the 21st century due to ongoing climate change2. The second reason is that according to the latest review dryland soils store 32% of the global soil organic carbon3 and so, dryland ecosystems are relevant for the Earth’s carbon cycle. However, drylands are heterogeneous environments due to the patchy vegetation distribution and so soils under plant canopies have greater concentrations of organic carbon and other nutrients compared to adjacent open areas. For this reason, analysing the behaviour of both microsites (open and vegetated areas, Figure 2) is of paramount importance for understanding how these ecosystems function.

Figure 2.- Dryland site in Australia where both microsites (open and vegetated areas can be observed). Credit: David Eldridge.

On the other hand, we studied the soil respiration response to temperature because there are several studies that indicate that carbon losses to the atmosphere through soil microbial respiration increase with temperature4, representing a positive carbon cycle−climate feedback5 . This means a magnification of the anthropogenic climate change. However, some studies have observed that this positive effect of temperature on soil microbial respiration decrease long-term 6. The main reasons that may be behind this change are substrate depletion or evolutionary adaptation. Therefore, there are some studies that try to address which of these mechanisms is playing a major role7–9. Most of them consider that there is no thermal adaptation, and so substrate depletion is the only reason behind this change on the soil microbial respiration response to temperature8,10.

Keeping all these previous knowledge in mind, I started to analyse the data derived from the laboratory incubation described above. What I found surprise me a lot because, opposed to most previous studies, our results show that there is thermal adaptation of soil microbial respiration in global drylands. I was starting to think that my results were wrong while I had the chance to do a research stay with Mark Bradford in the Yale University. When I arrived there, he started to work with his data derived from a very similar study but in a different ecosystem type. He also found thermal adaptation of soil microbial respiration. So, we started to rely our own results because both show the same pattern despite the differences in the ecosystem type and in the experimental design. And so, each of us wrote our own article derived from this data. Both papers were co-submitted, co-reviewed and now they are published at the same time. (Articles published in Nature Ecology and Evolution are available here: Dacal et al. https://doi.org/10.1038/s41559-018-0770-5;Bradford et al.  http://dx.doi.org/10.1038/s41559-018-0771-4)

Given that we both found that soil microbial respiration adapts to ambient temperature in two different ecosystems, we consider that this process may be taking place in all ecosystem types. As we are working at an ecosystem scale, we cannot ensure the mechanism underlying this thermal adaptation. However, we can confirm that soils from places with different MAT have different behaviours in response to temperature. Finally, according to the results of this study, we consider that microbial features should be included in the IPCC (Intergovernmental Panel on Climate Change) climatic models because doing so they could do more accurate predictions. 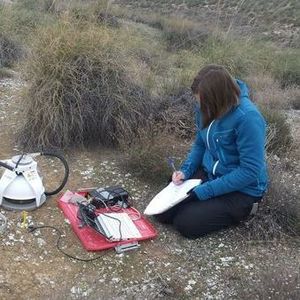