The long road to Denisova Cave

How old are the Denisovans, when did they meet and interbreed with Neanderthals, when and why did both groups become extinct in northern Asia?

No matter where one comes from, it is a long way to Denisova Cave. For over 30 years, Siberian archaeologists, students and volunteers, as well as international teams, have been drawn to this remote site in the Russian Altai, for several months each year. The presence of dozens of researchers at such a secluded place is truly dazzling on the one hand and sobering on the other considering that people have been present here, on and off, for almost a quarter of a million years.

In 2011, Tom Higham and I approached the excavators of the site, Professors Michael Shunkov and Anatoly Derevianko from the Institute of Archaeology and Ethnology at the Siberian Branch of the Russian Academy of Sciences, to explore a possible collaboration on radiocarbon dating the upper parts of the Denisova sequence as part of a wider Eurasian project called PalaeoChron. Reich and colleagues in 2010 reported the first ever Denisovan (Denisova 3) and published some radiocarbon dates, but these were mixed and hard to interpret. Could we do any better?

We had worked for many years resolving the age of Neanderthal extinction in Europe. But how old were their enigmatic eastern cousins, the Denisovans? How long did they live at the site? Did their disappearance mirror that of the Neanderthals? And when did our Homo sapiens ancestors come into contact with either group? These are some of the questions our new paper published in Nature on January 31 tries to answer.

Apart from significant human remains, the site has also yielded so-called Upper Palaeolithic artefacts; among them several carefully perforated deer and elk teeth and beautifully carved and polished bone points and needles. Prehistorians traditionally associate these items with the attainment of behavioural modernity. We have been dating such artefacts in Europe, the UK and the Near East, so we were interested in testing how the Denisova beads and bone points compared temporally to their western counterparts.

We were thrilled that our Russian colleagues welcomed us as collaborators. We travelled to the site for the first time in August 2013 and we experienced nothing but friendship and warm hospitality. At the Denisova basecamp we studied the archaeological sequence, the lithic artefacts and sampled beautifully preserved organic material alongside Mikhael Shunkov and Maxim Kozlikin.

We were accompanied everywhere by Vladimir Vaneev, our translator, and Sergey Zelensky, the Institute’s photographer, who both became firm friends. We went on long and bumpy off-road journeys across the Altai to other Middle Palaeolithic sites, Chagyrskaya, Strashnaya and Okladnikov Caves, we admired the natural beauty of the region, bathed in seriously cold rivers after bush saunas, saw wild strawberry fields (singing "strawberry fields forever") and the horses of the Altai, and toasted way too many vodka shots at camp dinners.

We returned to Novosibirsk a few months later, this time in the Siberian winter, with thick snow on the ground and daytime temperatures of -20 to -30°C. Because we were interested in knowing when human groups lived at the cave we concentrated on carefully sampling material which showed human modification; bones with butchery marks, pendants made of animal teeth and tools carved out of bone and ivory. More trips took place each year, to the cave in summers and at Novosibirsk for sampling during the cold winter months.

We had produced a first series of results by late 2015. Many of the artefacts yielded unexpectedly old ages, between 40-49,000 years ago, making them the oldest of their kind in Eurasia. We established that the site was not as mixed as originally suggested; instead, intact areas and areas with disturbed sediments were identified during excavation and the latter were avoided. We were getting ready to finalise our study, but another project intervened; I gave birth to my son in January 2016 and the Denisova paper became my “maternity leave project”. Wishful thinking of a first-time mum - my son has just turned 3.

This delay gave us time we did not know we needed. While we prepared our work for publication, our geneticist colleagues at the Max Planck Institute for Evolutionary Anthropology (MPI-EVA) in Leipzig sequenced further Denisovan and Neanderthal remains from the cave, discovered hominin DNA in sediments and produced genetic age estimates based on mutations in the mtDNA sequences and nuclear branch shortening. At the same time, an Australian-based geochronology team led by Zenobia Jacobs and Bert Roberts, sampled all three cave chambers and produced a magnificent series of optical dates which solidified earlier evidence by Russian scientists that the cave’s earliest infill dates back to ~300,000 years ago. Tom Higham returned to Denisova to sample charcoal and bones from the newly reopened Main Chamber section.

We also started using a new biomolecular method called collagen peptide mass fingerprinting or ZooMS, to locate new human remains amongst the scrap bones from the site. Denisova 11, the Neanderthal-Denisova offspring was the first fossil our team discovered with this method.

By early 2018 we had in total: 3 new human remains (4 if we include Denisova 11), 50 radiocarbon dates, 1 uranium-series date for Denisova 11, the genetic age estimates from 7 human fossils, as well a key selection of optical dates from Zenobia and Bert. But each line of chronometric evidence had its own limitations. Radiocarbon dating reaches its limit at 50,000 years ago or thereabouts; anything older than this cannot be dated. Optical ages date the deposition of the sediment rather than the human remains directly, and sometimes tiny human bones might be subject to imperceptible post-depositional movement. And genetic dates are relative age estimates, with uncertainties in mutation rates and so on. We were left wondering how best to approach all of the data to enable us to answer our original questions.

Looking at the results again and again before a conference talk, I had a eureka moment. Surely, all these different types of data could be built into a single Bayesian statistical model, which would then be allowed to find the best age fit for the human fossils? Along with our Oxford colleague Christopher Bronk Ramsey, a world leader in the use of Bayesian statistics in chronometric studies, Tom and I started to build models to bring all of the evidence together. We obtained crucial input from Janet Kelso, Viviane Slon, Svante Pääbo and Fabrizio Mafessoni from the MPI-EVA concerning the missing substitutions between different hominins and the associated uncertainties. Our initial attempts yielded large error ranges, so we added further data, and tested and retested the models tens of times. Fabrizio noticed that we were underestimating the mutation rate uncertainties and suggested that the variance of the time to get n mutations was distributed like a gamma or Erlang distribution. This deviation was added with a tailored piece of OxCal code written by Christopher and soon after the final models were ready.

We noticed that two human fossil age estimates were flagged as "outliers". Their genetic age estimates did not fit with their recovery spot in the stratigraphic sequence, which meant that at some point in time they must have moved from their original position.  We also noticed that our modelled age estimates were in good agreement with the nuclear branch shortening ages for the high coverage genomes of Denisova 3 (Denisovan) and Denisova 5 (Neanderthal). We pushed ahead with publication of the results, synchronising our paper with the optical dating study by Jacobs and colleagues.

For the first time, a timeline for Denisovan and Neanderthal presence at this key site has been produced. We can put ages on the tiny fragments of bone that tell us so much about our archaic cousins and place them in a palaeoenvironmental and palaeoclimatic context. We now know that Denisovans and Neanderthals were present in the Altai as early as 200,000 years, or even before. This is much earlier than we had thought for either group. Based on the current data, we also know that Neanderthals are not present in the cave after ~80,000 years, although they persist in other places in the region, and are outlasted by Denisovans who remained at the cave, possibly as late as ~50,000 years ago. We can see most humans remains fall in the OIS5, the last interglacial, when temperatures warmed across the planet. Could this be one of the moments when groups of Neanderthals expanded from west to east?

We can compare the ages of the ornaments in the site with evidence from other parts of the world. It is difficult to assign authorship to these ornaments. Denisova 3 comes from the same layers as some of the beads. Was it the Denisovans who produced them? Our Russian colleagues, who have studied carefully the archaeological sequence and the lithic remains think it must be. No bone remains or DNA from modern humans has yet been found at Denisova Cave although we know from the Ust-'Ishim femur (we directly dated it a few years ago) that modern humans were in the wider region by 45,000 years ago.

Dating is key in archaeology and especially so for the Palaeolithic. More work is underway, further trips to Siberia are planned and new exciting discoveries are hopefully just around the corner. 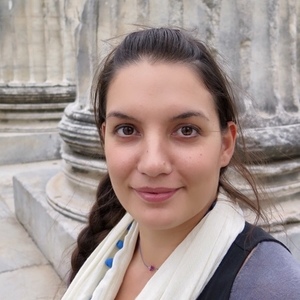