The Lost Words - Spell Songs is a collaboration between folk musicians and the creators of a book that laments our diminishing connection with nature.
Patrick Goymer
Chief Editor, Nature Ecology & Evolution
Follow
Liked by Simon Harold

A few years ago, Oxford University Press came in for concerted criticism when it removed a string of nature words from the new edition of its Oxford Junior Dictionary. Words such as acorn, conker and goldfinch no longer featured, and were replaced by the likes of blog and broadband. Some of the criticism was slightly contrived, given that the nature words still featured in other children’s dictionaries from the same publisher, but it became a very useful rallying cry for the loss of nature from the lives of both children and adults. It also gave birth to a marvellous book, The Lost Words, in which verse by Robert Macfarlane and illustrations by Jackie Morris bring the removed animals and plants to life. The book has been a huge popular success, and has been taken up by schools, wildlife charities, mental health organisations and hospices. The latest spin-off is Spell Songs, a collaboration with folk musicians, which premiered at Snape Maltings in Suffolk on Friday night.

The Lost Words is not about endangered species or high-profile conservation efforts; it’s about a more low-key, but perhaps more fundamental, appreciation of nature. The species are those whose names, not necessarily whose populations, are in decline. Folk music, with its strong connection to the everyday rural landscape, therefore seems an apt medium for Spell Songs.

The seven musicians (there were supposed to be eight but one was ill disposed) used both voice and a wide variety of instruments to bring the species to life. The zingy and colourful goldfinches made use of the ukulele, the solitary heron was the kora, and my favourite, in music and in life, was the barn owl hunting to the bass drum. The unison simple vocal line in mountain hare conjured up the purity of snow, and the otters were illustrated live to the music on a projected screen by Jackie Morris herself. There were new additions to supplement the songs in the book, notably the grey seal, sung beautifully in Scots Gaelic, and the performance also featured what the musicians presumed to be the first Mandinka-Gaelic duet. Interspersed between the songs, we heard a few anecdotes and explanations from the musicians, notably about one of them being admonished by a child for referring to dandelions as weeds.

I’m no aficionado of folk music, but I was thoroughly enchanted by Spell Songs. It was both fun and melancholic, balancing the need to celebrate the natural world while also lamenting its loss. I hope my enjoyment was shared by the substantial number of children who were in the audience, bringing the project right back to its original purpose. It was great to see Suffolk Wildlife Trust in attendance, highlighting their project to deliver in person a copy of The Lost Words to every primary school in the county – indeed, my own children had received theirs just the day before and were full of talk about it. It was fitting that the resulting display of children’s responses to the book was right next to the quote on the wall from the Aldeburgh Festival’s founder, Benjamin Britten: “I believe that an artist should be part of his [sic] community, should work for it, with it and be used by it.” Community and the natural world are two of the central pillars of folk music, and of the Lost Words campaign.

Spell Songs is on in London tomorrow, at the Hay Festival in May, and at the Folk by the Oak festival in July. You can hear them on BBC Radio 3's In Tune this evening (11 February). 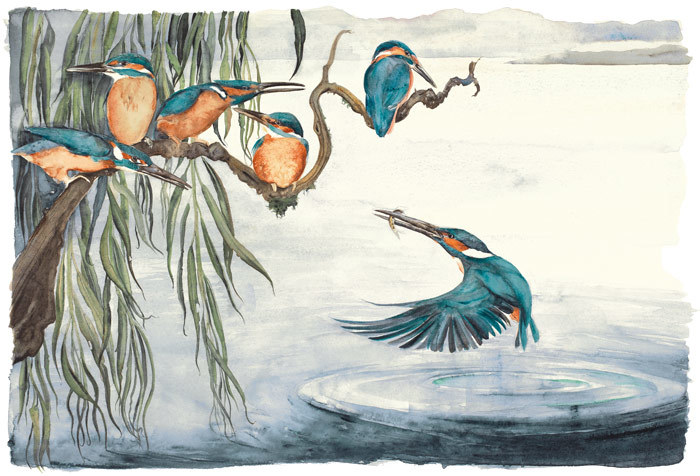 The Lost Words - Spell Songs is a collaboration between folk musicians and the creators of a book that laments our diminishing connection with nature.