Can javelin athletes help us evaluate a technology made by Middle Pleistocene humans?
Annemieke Milks
Hon. Research Fellow, UCL
Follow
Like Liked by Ben Johnson and 1 other
0

On a cold January morning I finished stuffing my small car with replicas of Spear II from the site of Schöningen (Germany), recording equipment, generators, a hay bale, and maybe most importantly, lots of food and drinks for our volunteer athletes. The experiment had been many years in the imagining, funding, and planning, and it’s always a little daunting when such a day arrives. It was the second of six experiments conducted during my doctoral research into the earliest known weapons. Spread out over several years, the experimental phase of my doctorate involved being trained by and collaborating with a variety of experts including ballistics engineers from the Impact and Armour group at Cranfield Defence and Security, military personnel, martial arts specialists, and in this case, javelin athletes.

Wooden spears made by Middle Pleistocene Homo - either early Neanderthals or perhaps  H. heidelbergensis - likely had a functional purpose. However, it remains unclear whether they were used as weapons for self-defence, for hunting either as thrust or thrown spears, or in all of these ways. Conversations with our colleague Jordi Serangeli had convinced me that at least some of the Schöningen spears were designed for self-defence against predators such as the saber-toothed cats known from the site, as well as for use as thrusting weapons. However, due to the design of a number of the Schöningen spears the possibility that they were thrown, first proposed by Hartmut Thieme, remained strong. Small experimental studies had already shown that they were capable of flight and of wounding an animal when thrown, but velocity measurements related only to extremely close distances, the ballistics and accuracy of these spears at longer distances remained unresolved, and the ability to use them to hunt larger animals such as the horses butchered at Schöningen was still unclear. Many researchers, some on the basis of anecdotal evidence, continued to propose that Middle Pleistocene spears were unlikely to be effective when thrown. Suggestions included that they were too heavy for flight weapons, would rapidly lose velocity in flight, and would impact with low energy. How did these prevailing characterisations of their inefficiency square with the small body of existing studies, and with ethnographic evidence of throwing at a variety of distances against a range of prey? Would current estimates of a 5-10 metre ‘effective distance’ for hand-thrown spears be borne out in our study when used by skilled throwers? Would they fly at all at greater distances, and would impact velocity decrease by distance?

Henry Bunn and Travis Pickering reasoned almost a decade ago:  '...to any who would discount the very idea of large mammal hunting with wooden spears by Pleistocene Homo: How can science ever determine when this behaviour actually began, if we allow our investigations to be guided by ideology rather than evidence and if we do not ask such provocative questions and then explore ways of answering them?'

In short, we desperately needed to produce empirical data based on skilled use, on spear performance. Weapon technologies are increasingly used proxies for cognition, subsistence, and social behaviours of different species of our genus, so if we are going to make behavioural and technological comparisons, we’d better evaluate them first.

Our paper in Scientific Reports addressed this need by asking javelin athletes to test replicas of a spear from the 300,000 year old site of Schöningen. We asked them to throw the spears at a series of different distances, capturing simple hit and miss data, whilst filming releases and impacts with high speed cameras, allowing us to analyse the relationship between release and impact velocities, and calculate kinetic energy and impact angle. This way we could begin to answer the above questions on whether the spears rapidly lose velocity in flight (on the whole, they don't), whether they impact with low energy (they don't) and what the distance limits in terms of hitting a target might be. Working together with javelin athletes not only gave us a sample of skilled throwers with which to establish clearer data, it also provided exciting insights into throwing techniques such as spinning spears on release seen in the high speed video below. Such insights underscore the likely importance of skill in use of technologies, though much work in this regard remains. Testing in field conditions was similarly valuable, because the physics of such objects in flight are complex and require us to understand them beyond a simple theoretical model in a vacuum.

On the basis of a paper suggesting that an elite athlete threw a replica of the same spear in long-distance throws, we had expected distance throws - i.e. those with a lot of power behind them but not aiming for a specific target - to be viable. However, maximum distance throws were not so successful with our athletes; as can be seen in the video below, several throws resulted in spears turning or stalling in flight. Their mass, almost perfectly matched to the mass of a men’s Olympic javelin, is clearly not a likely limiting factor, something we already had guessed based on ethnographic use of heavy throwing spears, such as those used by the Tiwi. Instead, the failed flights and landings for longer distance throws could be due to spear design. Alternatively it could be a result of the throwing level of our participants, who were ‘club-level’, not elite athletes. At any rate simply throwing for distance does not tell us a great deal about thrown spears as hunting weapons, so this is perhaps not the best avenue for further work.

On the other hand, showing that the spears can impact a target up to 20 metres distance doubles the estimated target distance. With bow and arrows estimated to have effective distances of around 25 metres, this narrows the gap in distance capabilities between hand-thrown spears and mechanically projected weapons significantly. We can also compare the energy and momentum values from this experiment with estimated brackets for hunting different prey sizes. Although we show that they have sufficient energy levels to hunt large prey according to these estimates, our results do not directly demonstrate lethality of these spears. That is because so many other factors can influence penetration including tip design and material, prey size, hide thickness, and location and angle of impact. To help address the lethality question, further experiments (not yet published) involved testing the penetrating capacity and resulting bone damage of such spears when used on large mammal carcasses.

Our results suggest that disadvantages of hand-delivered spears are likely complex. Their mass is not a limiting factor when thrown by someone trained in throwing such objects, and ideas that they do not impact with sufficient energy can also be rejected. One hypothesis worth going forward with is that hand-thrown spears are harder to master than complex projectiles. We can’t be sure how our athletes’ skills compare with prehistoric hunters, but we do know that hunter-gatherer groups who use thrown spears begin learning in early childhood. A related hypothesis, tentatively supported by our results, is that thrown spears may require larger body sizes to use effectively, meaning that an advantage of later weaponry could be a relaxation on time and energy budgets for humans using them. Such ideas require studies that are designed to have sufficient human participants to evaluate the effects of skill and physiology. Of course additional limitations of these early spears remain likely but the performance data in our study helps begin to build a clearer picture of just where overlaps and gaps between different weapon delivery systems occur.

Recently the hypothesis that Neanderthals display excessive trauma indicating reliance upon contact hunting has been overturned. That study may indirectly support the use of medium distance throwing weapons, including thrown spears and throwing sticks. Meanwhile the debate on the evidence of the timing and nature of the origin of throwing in the fossil record continues. While our experiment does not directly contribute to the latter debate, results that at least some of these early spears can function as flight weapons provides valuable quantitative data on likely distances and impact energies.

Ethnographically, hand-thrown spears are associated with all hunting strategies, including disadvantage, ambush, approach, encounter and endurance hunting. In other words, the delivery method itself is flexible. Such distances are still consistent with Middle Pleistocene Homo ambush hunting, potentially using both thrusting and throwing spears together, as current forager groups do. However, it also opens up the possibility of use of these early weapons with other strategies, including hunting in smaller groups and at greater distances. Given the potential of these early spears, we should explore alternative narratives about Middle Pleistocene hunters, testing hypotheses that they were flexible in their strategies, armed with the capability to hunt a range of prey in a variety of environmental settings.

Annemieke Milks
Hon. Research Fellow, UCL
Follow
My research is centred on the archaeology of Pleistocene humans, and in particular, subsistence behaviours and technologies. I completed my doctorate in 2018 at UCL's Institute of Archaeology, from where I also hold an MSc in Palaeoanthropology and Palaeolithic Archaeology. My expertise is in hunting technologies, with the focus of my doctorate specifically on the use of wooden spears. Since 2009 I have collaborated on excavations and analysis of materials from archaeological sites in Spain, France, Jersey, Germany and the UK, and conducted experimental work in collaboration with Cranfield Defence and Security (Defence Academy of the UK) and Loughborough University. 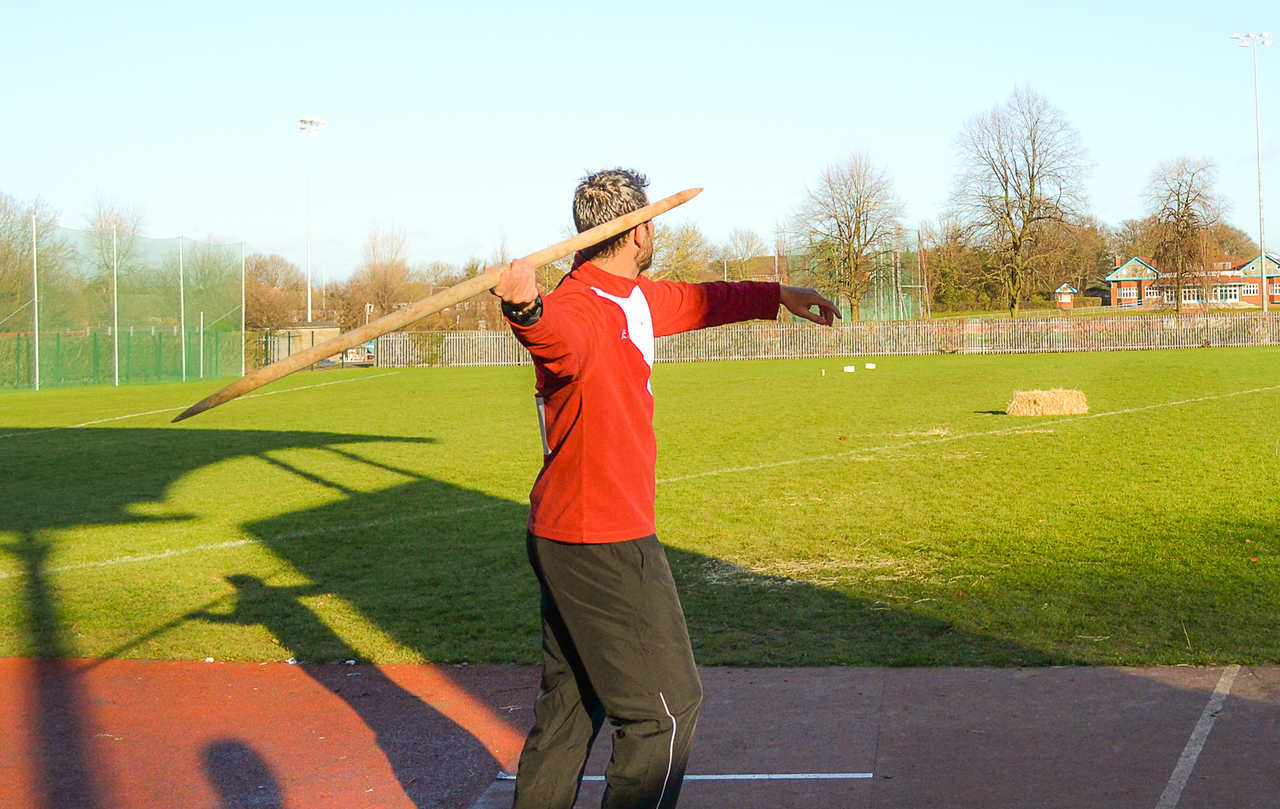 Can javelin athletes help us evaluate a technology made by Middle Pleistocene humans?