A community from Nature Ecology and Evolution
Contributor Nature Comms
Behind the Paper, World Soil Day 2019

It is unclear whether microbes and animals residing in soils follow similar distribution patterns. Here, the authors report richness and diversity of soil microbes and invertebrates across soil, vegetation, and land use gradients in Wales, showing that land use affects animals while soil traits affe…

Although soils were famously named ‘the poor man’s tropical rainforest’, soil biodiversity is very often overlooked. This is because the majority of soil biodiversity is microorganisms, such as bacteria, archaea, fungi, and protists. However, soils also support an impressive range of invertebrate diversity including earthworms, nematodes (Fig 1), and all sorts of arthropods. Together these organisms are responsible of many essential ecosystem functions, for example, decomposition of organic matter. Arthropods chew and grind up decomposing matter, making it more accessible to microbes, which break down the remaining organic matter. Earthworms are perhaps best known in this regard as they consume organic-rich soils, further releasing accessible nutrients to soil microbes. These functions culminate in the support of plants, which are needed to sustain every terrestrial ecosystem including human civilisation.

Yet, human influences are altering soil systems. Soil biodiversity is often influenced by changes in land use, such as felling a forest for livestock grazing or applying large quantities of inorganic fertilizers. Although the effects of such interventions have been studied on soil communities, advances in high-throughput sequencing have only recently facilitated the study of the natural history of soil biodiversity across large areas including diverse landscapes.

The major objective of my research has been to assess how soil communities change across land uses. Furthermore, I wanted to investigate whether each component of soil organisms were affected in the same way. To do this, I used metabarcoding to collect a snapshot of soil biodiversity from soils collected as part the Glastir Monitoring and Evaluation Programme (GMEP), which was funded by Welsh Government. GEMP assesses the impacts of its recent agri-environment scheme, Glastir and is led by the Centre for Ecology & Hydrology in collaboration other research bodies. Soils were collected for a range of metabarcoding and physico-chemical analyses over the summer months of 2013 and 2014 (Fig 2). At each sampling site land use was categorised based on plant communities using the Aggregate Vegetation Class methodology.

“Wales was an ideal location for this research, supporting a wide range of land uses. However, the predominant land uses in our study were various grasslands, especially important in supporting livestock production. Furthermore, as Wales is a relatively small, diverse land uses were located close enough that confounding factors such as latitudinal and climatic gradients were constrained (Fig 3).

We found divergent trends in soil richness across land uses. Richness of bacteria, fungi, and protists all followed the same trend (Fig. 4a-c), declining from the high-nutrient arable sites to the low-nutrient bogs. This may represent an example of the intermediate disturbance hypothesis (IDH) in soils, which suggests that diversity is highest in areas where successional processes are interrupted by intermittent disturbance events. However, it could simply be that nutrient inputs through fertilization or dormant organisms waiting for opportune conditions to reactivate are driving this trend. Interestingly, unlike other microbes, archaeal richness is highest in low-nutrient areas and lowest in arable sites (Fig. 4d). It is not clear why archaea would not follow the same trends as other microbes. Perhaps acidophilic lineages in moorland grass-mosaic and heath/bog habitats may be driving the trend. Richness of all microbial groups showed significant relationships with soil properties, particularly pH, carbon-to-nitrogen ratio, and bulk density. Finally, animal richness was lowest in arable sites and relatively stable across all other land uses, unlike all microbial groups (Fig. 4e). This was expected to an extent, as soil animals can be extremely sensitive to agricultural disturbance. Furthermore animal richness was not significantly correlated with any environmental characteristics.

Our results lay down a necessary outline of the natural history of soil communities. We demonstrate divergent patterns of biodiversity within major groups of soil organisms. The scale of our work represents an important interface between targeted experiments and global surveys. We plan to use these findings to inform future research. For example, we believe our findings represent a call to investigate major ecological processes such as the IDH in soils generally. But I hope, that above all, our work inspires you to take a moment and think about what’s going on beneath your feet.

Fig 1. Plectus sp. 200X magnification. Nematodes are a major component of soil biodiversity. They are important links in the decomposition food web and can be major consumers of smaller organisms or disease agents of plants and animals.

Fig 2. Soil cores were collected for metabarcoding and physico-chemical analyses.

Fig 3. This photo taken near Bethesda, highlights the diversity of land uses typical of Wales. In the foreground, sheep graze and open grasslands stretch to the hills. Behind the village, plantations of both coniferous and deciduous trees can be seen. In the background are the mountains of Snowdonia.

Fig 4. Richness of soil a bacteria; b fungi; c protists; d archaea; e animals across land use ordered from most (crops/weeds) to least (heath/bog). 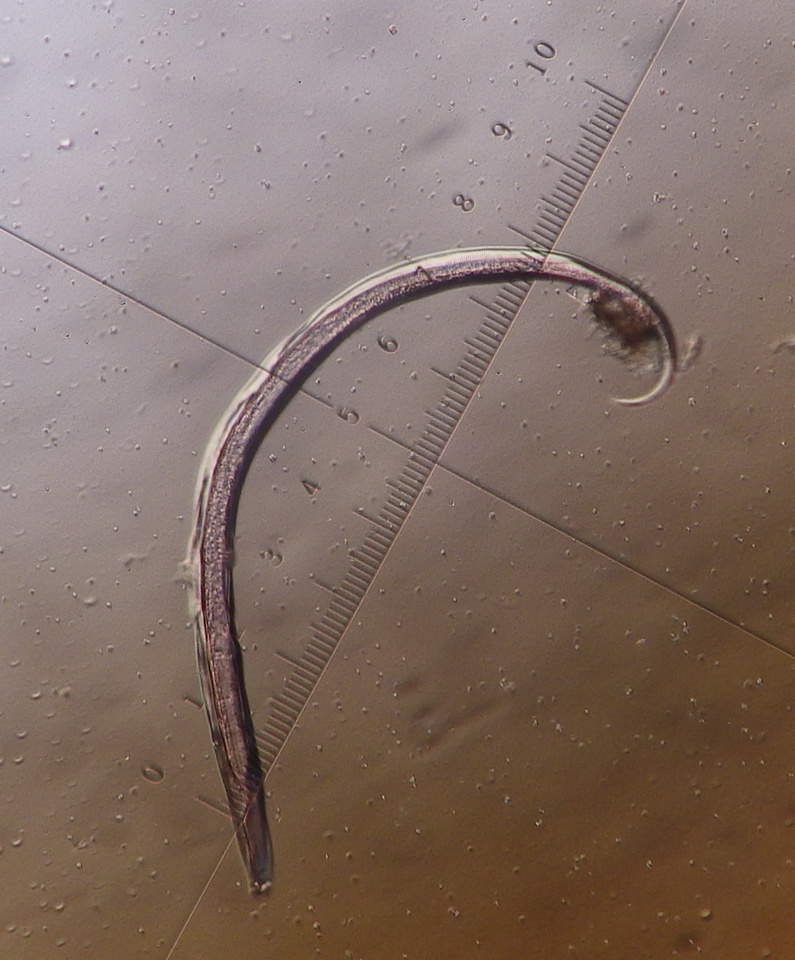