The impacts of Hurricane Maria on Puerto Rican forests: Is this the new normal?

Given the potential for increasingly common and intense tropical storms, it is important to understand their effects on island forest communities. Here, the authors show that Hurricane María’s strength and rainfall had larger effects on tree mortality than other less severe storms, and that large tr…

We traveled to Puerto Rico in January 2019, three months after Hurricane Maria had pummeled the island. During this trip, we visited all our forest sites in the island (https://blogs.ei.columbia.edu/2018/03/22/the-re-greening-of-puerto-rico/). Besides the horrific effects of the storm on human wellbeing and infrastructure, most forests we visited had suffered very severe damage. Of course, hurricanes have struck Puerto Rico many times in the past, most recently Hurricane Hugo (1989) and Hurricane Georges (1998), but a storm of Maria’s severity had not made landfall on the island since 1928.  If as climate models predict, hurricanes will become more intense with a warming climate, is Maria the new normal? And if so, what does it mean for forests in Puerto Rico?

In our new paper (https://www.nature.com/articles/s41467-019-09319-2 ), we take advantage of tree damage data collected at the same site in the Luquillo Mountains of Puerto Rico after Hurricanes Hugo and Maria to compare the impacts of storms of varying severity on the forest.

Hugo and Maria had strikingly different effects on the forests: Maria killed twice as many stems and broke three times more stems than Hugo. Large trees were particularly likely to break during Maria but not Hugo. Perhaps more importantly, tree characteristics, such as having hard wood, that had protected trees from breaking during Hugo did not do so during Maria.

There were also some clear winners and losers: the Sierra palm, a dominant species in the forest, fared extremely well during both storms; its flexible stem can bend rather than break during high winds and its fronds regrow quickly after the storm is over.

What does this all mean?  If hurricanes of Maria’s severity are indeed the new normal, we can expect to have shorter statured forests dominated by a few wind-resistant species such as the Sierra palm.  These forests will probably store less carbon.

So, what needs to be done? Can we use models to get a better understanding of the fate of forests in hurricane-prone regions? Lately, I have been thinking a lot about tree form. When we model forests and their response to a changing climate, trees are represented largely by their physiology and form is subsumed into simplified allometric relationship. Yet, tree species display a bewildering variation of form that shapes among other things, their response to wind. I think to understand and predict the impacts of more intense storms on forests, we will need to fully delve into tree form and biomechanics. The exciting news is that we now have tools at our disposal (e.g., LiDAR, Terrestrial Laser Scanning) that will allow us to look at forests in 3D and to better understand the impacts of wind on forests. I very much look forward to exploring these new research avenues. 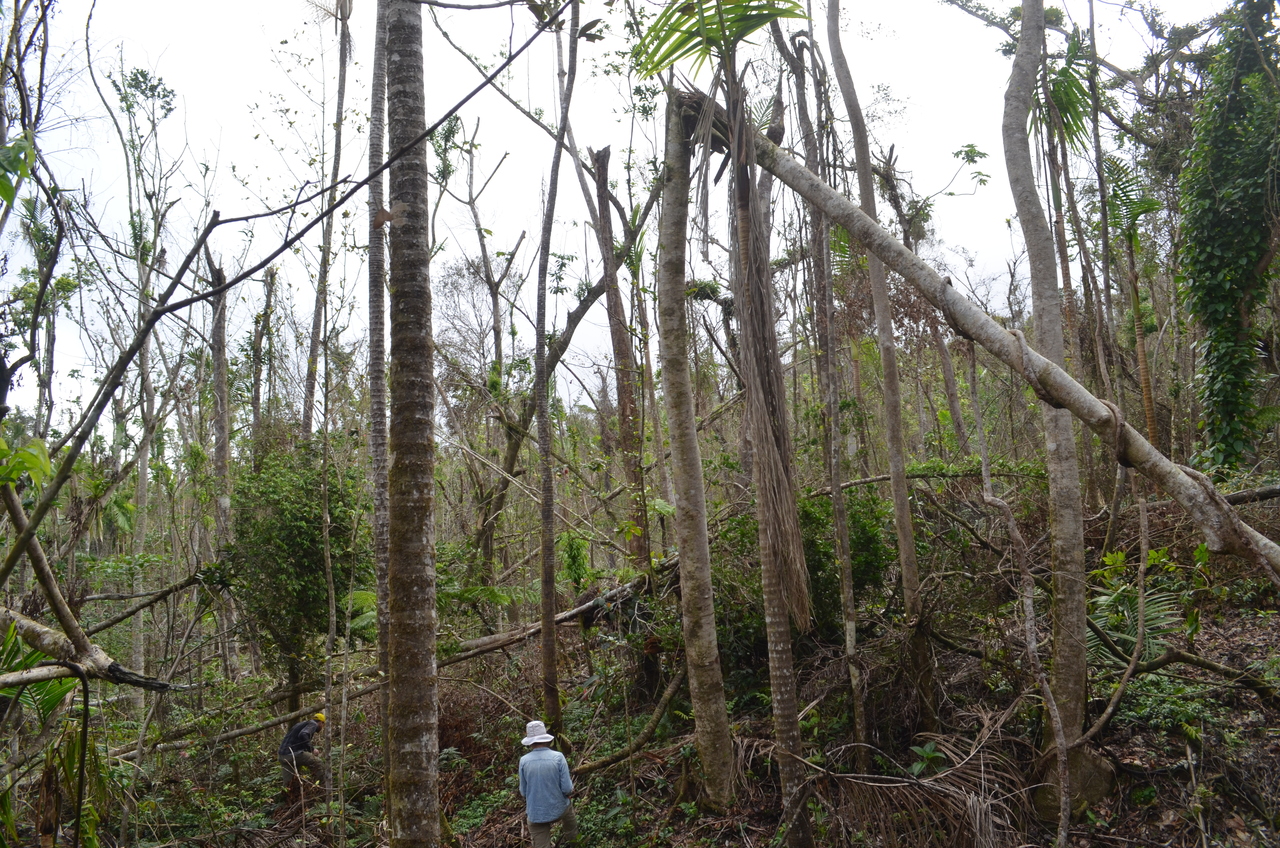 The impacts of Hurricane Maria on Puerto Rican forests: Is this the new normal?