Two groups of birds, Darwin’s finches and Birds-of-Paradise are historically and respectively associated with the discoverers of the rules of natural selection:Charles Darwin and Alfred Wallace. These two groups of species are also among the best demonstration of natural selection and sexual selection. We reconstructed the history of sex chromosome evolution of bird-of-paradise, and also other songbirds in this work.
Qi Zhou
Professor, Zhejiang University, China
Follow
Like Liked by Patrick Goymer and 2 others
0

Songbirds are a species-rich group known for their diversified sexual traits. Genomic analysis of 11 songbird species reveals evolutionary strata and shows their role in reshaping the genomic architecture of songbird sex chromosomes.

Wallace may have been overshadowed by Darwin on his independent conception of natural selection. Birds-of-Paradise, however had already captivated Europeans by their extraordinary shapes and colors of male plumage (females are usually drab) over two centuries before Darwin’s voyage to the Galápagos islands in 1835, where he discovered the Darwin’s finches. The plumage trade, once exclusive to the royal families, can be still reflected by some of the species’ names, such as Paradisaea rudolphi, which is after the Crown Prince Rudolf of Austria. Besides the plumage, it was Wallace who as the first naturalist gave a full scientific account for the bewildering sexual display of male bird-of-paradise, after spending years searching for them in the Malay Archipelago. During the mating season, tens of male Greater Bird-of-Paradise would gather on the separate tree branches to compete for only one patrolling female, by their songs and ‘dance’ with plumages (called ‘lekking’), instead of fighting like mammals. Thus there is usually extreme sexual selection on male bird-of-paradise. Today, while scientists have recently started to use genomes of Darwin’s finches to look into the mechanisms of natural selection in shaping their different size or shape of beaks adapted to their different diet; we here produced genomes of six birds-of-paradise species here to look into how their sex chromosomes evolve. This presents the first step to deconstruct the genetic basis for their dramatically different morphology and behavior between sexes.

This project was initiated when I was still a postdoc scholar at University of California, Berkeley, probably during a bird-watching trip with my friend Stefan Prost. Back then I just finished my analyses of sex chromosomes of the other 50 bird species, and he just started his work on bird-of-paradise (he has recently published the results). To ornithologists, or to an evolutionary biologist like me who previously knew little about these magnificent species beyond David Attenborough's documentary movies (not surprisingly, there is a species named ‘magnificent bird-of-paradise’), it is always the dream species that one would like to work on. Stefan connected me to his advisor, Martin Irestedt in the Swedish Museum of Nature History, and we coordinated together and sequenced the whole genomes of female individuals of six bird-of-paradise species. Although male birds have flamboyant phenotypes, female birds are the ones carrying a sex-specific chromosome. In contrast to mammals, birds have a ZW sex chromosome system, with two nearly-identical Z chromosomes in males, and one Z and one specific W chromosome in females. The different copy numbers of Z chromosomes may have contributed to the usually very different phenotypes between sexes. We are interested at how sex chromosomes of bird-of-paradise species evolve. After I established my lab, my Ph.D. student Luohao Xu has taken a further step and expanded the analyses to all the available female genomes of songbirds, where birds-of-paradise belong.

Songbirds are one of the most diverse vertebrate species groups, with a species number equivalent to that of all mammals. Interestingly, we found that major changes between the sex chromosomes have all occurred before the songbird species radiation. Recombination suppression between sex chromosomes, usually through chromosome inversion, is very critical for maintaining the sex. Without that, the sex-determining gene on one sex chromosome will be passed down to offsprings of the opposite sex by being recombined onto the other sex chromosome. We concluded that the ancestor of songbirds have undergone four consecutive times of recombination suppression on the sex chromosomes. They have together produced a gradient of sequence divergence between sex chromosomes, called ‘evolutionary strata’. Interestingly, we found massive accumulation of one family of retroposons between the recombining part and the most recent evolutionary stratum of the sex chromosomes. This suggests the suppression of recombination maybe initially mediated by the repeat elements. Somewhat surprisingly, some bird-of-paradise species do not show a significantly faster rate of sex chromosomes vs. the autosomes, as a genomic signature of strong sexual selection. This still requires more field studies of these extraordinary species to better understand their life history, after all, genomic work is only the first step. 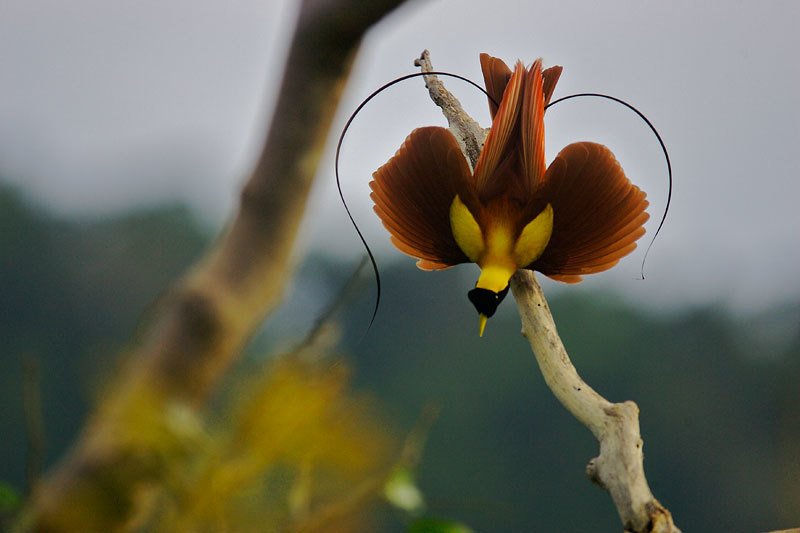 Two groups of birds, Darwin’s finches and Birds-of-Paradise are historically and respectively associated with the discoverers of the rules of natural selection:Charles Darwin and Alfred Wallace. These two groups of species are also among the best demonstration of natural selection and sexual selection. We reconstructed the history of sex chromosome evolution of bird-of-paradise, and also other songbirds in this work.