In recent times biodiversity has been seriously threatened directly or indirectly by human activities endangering the long term stability and functioning of ecosystems. Globally, but particularly in the tropics, we are aware of the negative impacts on biodiversity produced by land use changes for agricultural development, livestock, forestry or the development of infrastructure; further biodiversity is heavily affected with the loss and fragmentation of habitat, overexploitation, the invasion of alien species, pollution and climate change, amongst others. Some attempts to protect and halt biodiversity loss have shown  progress particularly through the implementation and compliance of several conservation policies from local to national to regional scales, however with differential success rates. Strict conservation measures have indeed proven useful but are yet not enough to halt biodiversity loss and the list of threatened species grows by the day.

One of the regions where we are conducting ecological research applied to conservation is a region of global biodiversity importance, Colombia. Fire in the country is one of the human induced disturbances that is increasing its frequency and intensity with land use and climate changes and when uncontrolled can lead to simplification of tropical forests. Indeed fire is often an ecological catastrophe for most species in the tropics when long term communities stability is at risk through changes in species composition and structure. Fire induced transitions to more open forests favor the presence of invasive and exotic species and, often soil and its nutrients are lost, the availability of water is affected and the reduction of food and shelter for wildlife is one of the latest consequences. Unfortunately fire is a disturbance that is to stay for a while in the tropics, it is a traditional land management tool that local communities are not willing to give up. Under these circumstances, we believe fire ecology is essential to understand the risk but also to expose resilience of the species to these type of processes, particularly outside protected areas in human dominated landscapes.  Some species adapt to disturbances and understanding this ability can provide some vital information and help design tools for better managing the land, reduce biodiversity loss risks and protect biodiversity at the same time.

Photo 1. Zygodontomys brevicauda (@Tania González). Small non-flying mammals  are more diverse in unburnt than fire affected forests of the Orinoco basin, but in burned areas predominates this exclusive species of the neotropic (photo), of wide distribution that can occupy a great variety of habitats and feed on different resources (preliminary results from T. González PhD).

We are working on providing a detailed understanding of how animals and plants respond in the short and long term to different degrees of disturbance in Colombia. As the vegetation recovers, the central element in the life of animals, some species can adjust their physiology and behavior to meet their habitat needs and, despite the disturbance, remain in affected habitats. Some species might also have an important role to help these habitats recover through nutrient redistribution and dispersion, at least under lower levels of disturbance severity. To protect our species and complement other conservation measures we must understand better and highlight their ecological role in human dominated tropical landscapes.

This post has been written by Dolors Armenteras and Tania M. González 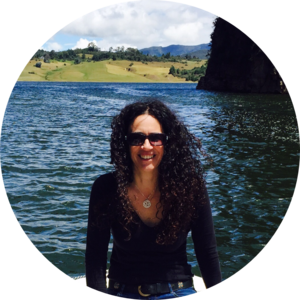