Its impossible to tell the story of modern conservation without coffee and Costa Rica. In the nascent days of the conservation movement, practitioners set aside large tracts of land and sea to be used by nature alone. Early conservationists believed that these areas, devoid of human-driven pressures, would allow the flora and fauna found there to lead ‘natural’ lives. Coffee and Costa Rica changed that perception.

Coffee was the first major commodity to teach us both the economic and conservation value of ‘wildlife-friendly’ agriculture. Decades of rigorous research, mainly in Central and South America, has shown that shade-grown coffee, coffee intermixed with other trees, can achieve a higher quality product, while also providing manifold benefits to biodiversity and ecosystem function. These early experiments demonstrated how agricultural systems can be designed to be part of a well-balanced conservation portfolio without trading off economic profitability.

In the early days of the conservation movement, this emerging conservation research in Costa Rica set forth a new pathway in which both economy and environment could thrive. As one of the first countries to recognize the importance of nature and biodiversity to economics, Costa Rica was poised to become a leader in global conservation.  They implemented  revolutionary ‘green’ legislation in the 1970s, which culminated in the first ever program that paid people for maintaining forest on their land to produce ecosystem services in the 1990s. Many of the policies put in place during this time complimented earlier work that established national parks and preserves.  By incentivizing landowners to keep patches of forest on their land, forested areas far beyond traditional protected areas were preserved or restored.

Taken together these lessons have shown a pathway forward to identifying scenarios where economic and environmental benefits co-align to find ‘win-wins’. In coffee, research has repeatedly shown that even small forest elements around the landscape benefit farmers economically by increasing the richness and abundance of pollinators and providing habitat for birds. In turn, birds control the problematic coffee borer beetle, benefiting the natural ecosystem and the success of the farmer’s crop. These diversified farming systems have come to provide valuable habitat for countless species of plants, insects, mammals, birds, reptiles, and amphibians. However, ecosystem services extend far beyond just coffee systems; for example, the capacity of mangroves to mitigate the impacts of storm surges, the tendency of biodiversity to increase tourism revenue, and how the preservation of upstream natural habitats can secure pure drinking water for downstream cities.

However, as much as the notion of ecosystem services as a conservation tool, spurred in large part by work in coffee and Costa Rica, has blossomed, we now find ourselves at a critical juncture We have a plethora of increasingly compelling demonstrations in individual contexts, but we must now scale our work with governments and inter-national development banks to mainstream the notion of ecosystem services into centralized decision contexts for the benefits of both people and nature. To that end, we return to our central example of coffee in Costa Rica.

In the early days, management interventions focused on demonstrating the benefits of wildlife-friendly farming practices to small land-holders in the region where original research was being conducted. Given the compelling evidence, it was not difficult to cultivate buy-in from individuals who managed their own family farms. However, the frontier is now at the level of national governments and international development banks. Our current focus is to assist leaders in the Costa Rican government across the Ministry of Environment and Energy, the Central Bank, and the Ministry of Statistics to scale local primary research findings to provincial and national scales in pursuit of their policy goals. This type of work has only recently been made possible due to the rise of massive, publicly-available databases of biodiversity information coupled with dramatic advances in computational capacity allowing for global ecosystem service modelling.

Our goal in this work is to generate spatially-explicit maps that show where pollinator diversity is currently meeting the needs of growers, and more importantly, where adding additional natural elements to the landscape would significantly boost pollination, yield, and quality. This ongoing research and collaboration will enable us to reach not only far more individual landowners than possible previously, but also communicate our message to larger corporate farms. As a result, we hope to operationalize one of the best tools in our conservation toolbox, ecosystem services, to protect species. In particular, we hope to emphasize conservation of insects and pollinators generally, both of which are in troubling global decline. With Earth Day in mind, and our emphasis here on protecting species, a spotlight on ecosystem services might help us best protect some of our lesser appreciated, but crucial, species.

Map of modeled coffee pollinator species richness which is produced as part of this work. 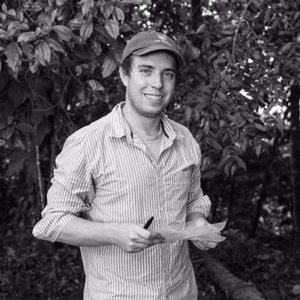 Jeffrey Smith is currently a PhD student in the Department of Biology at Stanford University. His work includes both empirical field studies on insect biodiversity in Costa Rica and larger scale spatial modelling efforts across taxa.
Follow