Black or red: love story and genetics of a colourful bird

Kang-Wook Kim
Postdotoral Research Associate, The University of Sheffield
Follow
Like Liked by Patrick Goymer and 2 others
0

Gouldian finches have a head colour polymorphism that is also associated with physiological and behavioural differentiation. Here, the authors map this colour polymorphism to a putative regulatory region for follistatin on the Z chromosome and suggest it is maintained by balancing selection.

Naturally occurring, stable colour polymorphisms have been hugely important in evolutionary genetics (e.g. those in snails, butterflies, birds, mice), and recent developments in genomics have made them even more rewarding by allowing us to identify their genetic causation. One particularly striking example is the three-colour (black/ red/ yellow) system in the Gouldian finch (Erythrura gouldiae), an endemic species of Australia.

This species was first observed by Europeans in the 19th Century, the era of discovery for Australia, and some specimens were sent to British ornithologist John Gould (1804 – 1881), the father of bird study in Australia, who is also famous for identifying the specimens of Darwin’s finches. It is said that he was so attracted to the beauty of this colourful bird that he named the species in memory of his late wife Elizabeth Gould (1804–1841), a major illustrator of the birds in his books. As I am from Korea, where wives do not change their surnames after marriage, I could not understand why this bird had to be Lady Gould’s finch, not Elizabeth’s finch, but I totally agree that everyone has to love the Gouldian finch. Personally, when I first encountered a picture of the three morphs of the Gouldian finch at the very first meeting with my PhD supervisor, Terry Burke, I immediately fell in love with this species and decided to study it. Back then, Terry asked me whether I would be interested in studying the ecology or genetics of this species and I chose genetics because I could not leave my wife with one- and two-year-old babies for fieldwork. But it was only later that I realised that this decision meant that I would miss the opportunity to explore the Australian tropical savanna, and I would only play with DNA collected by Simon Griffith at Macquarie University. It was not until I visited a bird exhibition held by the Australian Finch Society in the UK halfway through my PhD that I saw live Gouldian finches for the first time. It was fortunate for me that there are so many bird lovers in the UK, and that I could obtain the DNA of other finches of the family Estrildidae via the chair of the society.

Moreover, I did not know how tricky this colour polymorphism was. Initially, three morphs of the Gouldian finch were considered to be of different sexes, species or even different genera due to their striking morphological differences. Mr Gould himself assigned different species names to the black and red morphs in 1844, and there were subsequent debates for half a century on the classification of the morphs. In 1945, Southern, who discovered the sex linkage of the Red locus that determines if the birds have black or red heads, said “(gene) frequencies could easily be checked by counts in the field, and no doubt it will be possible to get this done satisfactorily after the war”. However, unlike his naive expectation, it was not an easy task to accurately estimate gene frequencies as heterozygous males cannot be phenotypically distinguished from homozygotes. Furthermore, recent observations in captive populations suggested that the Red locus is associated with multiple phenotypic differences between morphs, including pre- and post-zygotic incompatibilities. If these incompatibilities are also present in the wild population, then the Red locus is expected to show departure from Hardy–Weinberg Equilibrium and, ultimately, the population should split into different species. This raised a puzzling question. How come these morphs still belong to a single species? To answer this we needed to understand the genetic architecture of the Red locus. In 2011, heavy snow blocked my journey to the University of Nottingham where I went to construct RAD libraries with help from Angus Davison and Mengning Liu. A Chinese hot pot prepared by Mengning’s mom warmed me up and I managed to make the libraries. When I soon discovered, at the first attempt of exploring the haystack of 6 billion base pairs of RADSeq data, SNPs associated with the colour polymorphism upstream of follistatin, I was so excited that I declared that I would quit my 10-year-old smoking habit (fortunately I am still a non-smoker). Now that we had a starting point, I thought we should be able to easily understand the genetic basis of colouration and potentially the cause of the genetic incompatibilities. However, well begun was not always half done, as it took a painfully long time to finally figure out what was going on at this locus through much collaborative work. Especially, the involvement of Sheffield colleagues Ben Jackson and Kai Zeng added a significant evolutionary context to the work, and whole-genome sequencing data from colleagues then at Cornell University extended our view at the genomics level.

In this paper we have studied the molecular basis of the Red locus. Drawing from an array of genomic data, we identified the specific genomic region that differs between red- and black-headed finches. In view of the known pleiotropic effects, we hypothesised that the locus might be in an inversion supergene, as seen in the ruff (Küpper et al. 2016; Lamichhaney et al. 2016) and zebra finch (Kim et al. 2017) that we had also studied in Sheffield. However, we demonstrate by carefully assembling the alternative divergent haplotypes that this is not the case. The region of divergence is remarkably small, spanning ~72 kbp, and falls within a putative regulatory region of follistatin, which is an antagonist of the TGF-β superfamily known to regulate many traits, including melanin pigmentation. We also show that the diverged region is most likely maintained by balancing selection by using coalescent simulations. We still do not know the cause of the observed incompatibilities in captive populations, but we speculate that extended linkage with the Red locus might have created the phenomena that were not apparent in wild population. Hence further studies of this locus may provide another layer of knowledge about the incompatibilities that might contribute to understanding speciation. 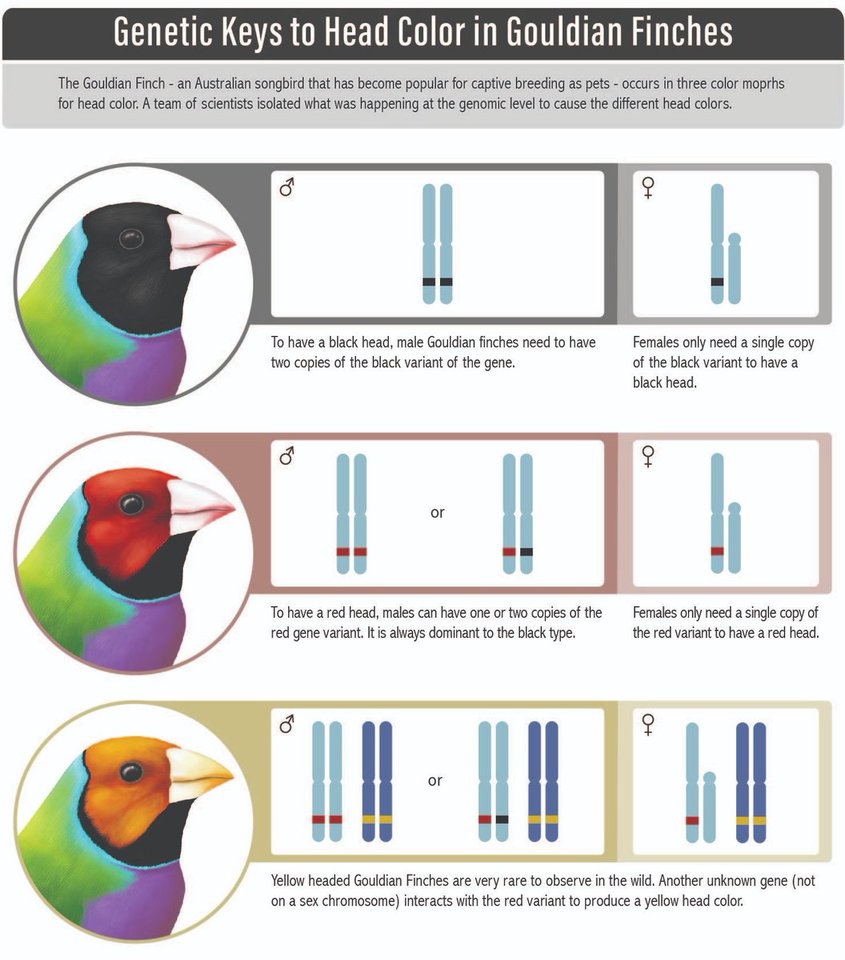 Black or red: love story and genetics of a colourful bird