Evolution has produced an amazing diversity of life on earth. But sometimes, rather than diversity, evolution has maintained a remarkable consistency across a wide range of distantly-related organisms. One famous example of such evolutionary stasis is the number neck (cervical) and back (thoracic and lumbar) vertebrae of mammals. Nearly all mammals have the same number of cervical vertebrae no matter how long or short their necks are – humans, giraffes, mice, whales, and platypuses all have exactly seven cervical vertebrae. There are only three exceptions to this rule out of over a thousand genera of mammals – manatees (which usually have six) and both types of living sloths (two-toed sloths usually have six, three toed sloths nine).

Consistency in the number of thoracic and lumbar vertebrae is not quite as stark as in the neck and there are a larger number of exceptions, but the majority of mammals possess 19 or 20, for a total of 26 or 27 “CTL” vertebrae (for “Cervical, Thoracic, and Lumbar” vertebrae). In this case, humans are actually one of the exceptions (we have 24), but most mammals – including animals as diverse as most rodents, rabbits, deer, kangaroos, koalas, cows, monkeys, and others – all have 26 CTL vertebrae while dogs, cats, bears, weasels, otters, and their relatives all have 27. There is little variation in these numbers either within species or across different species, even different species separated by over 160 million years of evolution. One hypothesis states that fast running constrains the number of CTL vertebrae in mammals, and that slower mammals are more free to vary, but this hypothesis was based on data from a limited sample of mammalian diversity. In an effort to learn what causes this remarkable evolutionary stasis, and why there are exceptions like us, we set out to create a clearer picture using a larger and more diverse sample of mammals and new methods that account for evolutionary relatedness.

Cheetahs on the Edge--Director's Cut from Greg Wilson on Vimeo.
Many mammals flex and extend their back to increase the length of their stride, potentially creating a selection pressure against changes that could impinge on the mobility of their backs. Several cheetahs beautifully demonstrate this type of running in this National Geographic video.

We counted the vertebrae of thousands of individuals for over two hundred of species of mammals. We noticed that species with a lot of variation in vertebral numbers among members of that species also tended to be the species that deviated from the typical mammalian pattern of 26 or 27 CTL vertebrae. This suggests that selection is weeding out individuals that vary too much from the typical pattern, and a lack of variation within species is preventing long-term evolutionary change.

We compared variation in number of CTL vertebrae to traits such as speed, habitat, locomotion, spine mobility, posture, and limb use. We found, as predicted by the running speed hypothesis, that mammals with stiff spines were significantly more variable in their numbers of CTL vertebrae. Interestingly, however, in our analysis this did not seem to be associated with running speed per se. Instead, this trend was primarily driven by animals adapted to antipronograde behaviors (behaviors in which animals keep their limbs in tension rather than those in which animals stand on their limbs; a child on monkey bars is using antipronograde behavior).

We hypothesize that the classic body plan of therian mammals (mammals that give birth to live young) is built on a mobile back and that this body plan is conserved regardless of running speed. Changes in types of vertebrae are determined by Hox genes – the genes that organize animal bodies along the head-tail axis, ensuring that your eyes go on your face and your legs go at the base of your torso. But changes in Hox gene expression sometimes creates vertebrae that are intermediate in type, which can impinge the mobility of the spine. For animals following the ancestral body plan, from possums to tigers, departures from the ancestral types of vertebrae in the back creates a risk of inefficient locomotion and are weeded out by natural selection. Mammals that depart from this body plan, however, such as apes adapted for antipronograde behaviors, are more free to vary in their number of CTL vertebrae. Our own atypical number of CTL vertebrae, then, may be the consequence of our evolutionary history as antipronograde climbers. 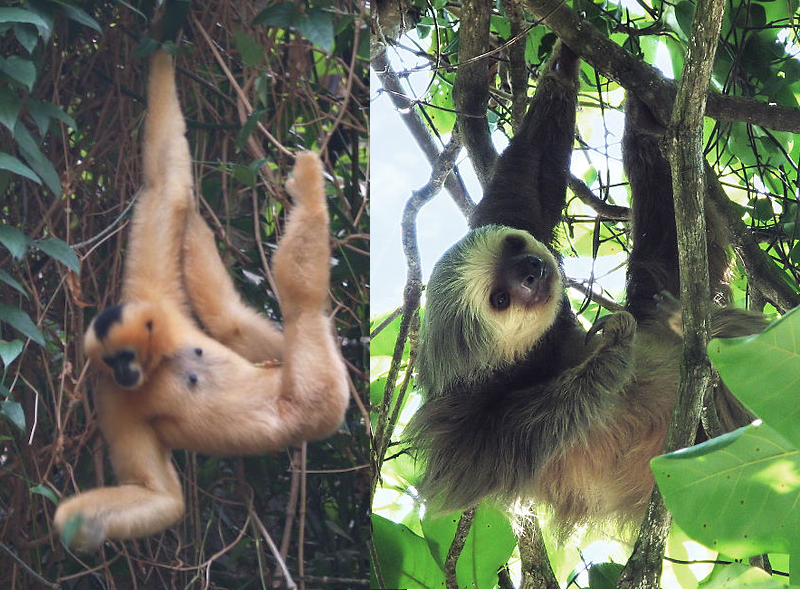