Arthropod silk is known as a versatile tool, and its variability makes it an attractive bioma- terial. Eumeta variegata is a bagworm moth (Lepidoptera, Psychidae) that uses silk throughout all life stages. An understanding at the molecular level of bagworm silk is an opportunity to expand the possibilities for artificial biomaterial design.
Kazuharu Arakawa
Associate Professor, Institute for Advanced Biosciences, Keio University
Follow
Like

Nobuaki Kono et al. report the genome sequence of the bagworm, an insect that produces silk throughout all life stages. The authors find that bagworms have a novel fibroin gene sequence that contributes to the high tensile strength of bagworm silk.

Multiple clades of arthropods including insects and arachnids produce protein fibers, or “silks”, for a variety of purposes such as for the protection of cocoons or eggs, shelter, foraging, dispersal, and reproduction. Mankind has been utilizing this versatile material produced by domesticated silkworm moths for thousands of years, as luxurious textiles and comfortable clothing. There is a substantial growing interest in the use of silk as a biomaterial in the recent years, for their extraordinary mechanical performances, renewability, biocompatibility and biodegradability. Spider silks are especially attracting industrial attention for their extreme toughness surpassing that of steel.

In spite of their unique ecology and the utility of the silk, bagworm moths (Family Psychidae) remain a neglected clade for genomic and molecular studies, unlike other cherished members of Lepidoptera like butterflies and silkworm moths and its wild relatives. Bagworm larvae creates a protective case to hide, made out of silk and other environmental materials such as sand, lichen or plant materials, and the case itself is attached and hanged on the surface of rocks or trees using their silk. Eumeta variegata (also used to be known as Eumeta japonica) is the largest bagworm species in Japan, with a protective case growing as large as 5 cm. Many presumed high mechanical performance of E. variegata silks to structurally support such large “bags”, but little was known as scientific reports.

We were also interested in E. variegatesilk as a potential protein material with industrial applications, and therefore sequenced and annotated its 732M bp genome using a nanopore sequencer, identified the fibroin gene, and conducted mechanical performance testing of the silk. Thanks to the ability of the nanopore sequencer to read extremely long stretches of DNA, we were able to identify nearly full architecture of the approximately 19k bp fibroin gene, which is almost entirely comprised of Glycine-Alanine repeats and poly-Alanine stretches. This amino acid sequence feature suggests strong crystal phase of the silk, giving it a high tensile strength at the expense of reduced elasticity, as opposed to high-toughness spider dragline silks comprised of alternating amorphous and crystal phases. Mirroring these observations, our mechanical testing showed highest tensile strength among tested lepidopterans of 636 MPa, but with lowest extensibility of 19.5%. It is fascinating to speculate the alternative evolutionary strategies and selection trade-offs, where extensibility is selected to be essential to cushion against external damage to protect the cocoon in silkworms, whereas bagworms evolved with an alternative strategy of hard casing.

Coincidentally, there was a simultaneous publication by another group in Nature Communications reporting on the structure and performance of E. variegata silk. In their report, extremely high tensile strength of 2.01 GPa as well as high extensibility of 31.7% were presented, making E. variegata not only the champion of tensile strength in Lepidoptera, but rather the champion of all properties among all arthropods. Further studies and confirmations from other groups would be necessary to determine if the silk performance of bagworms are truly “extraordinary”, but we would like to at least note that the standard deviation in the measurement of these mechanical properties are much lower and therefore more consistent among replicates in our work, with 55 MPa (8.6%) for tensile strength and 4.5% for elasticity, whereas these are 0.80 GPa (39.8%) and 13.7% in Yoshioka et al., respectively. 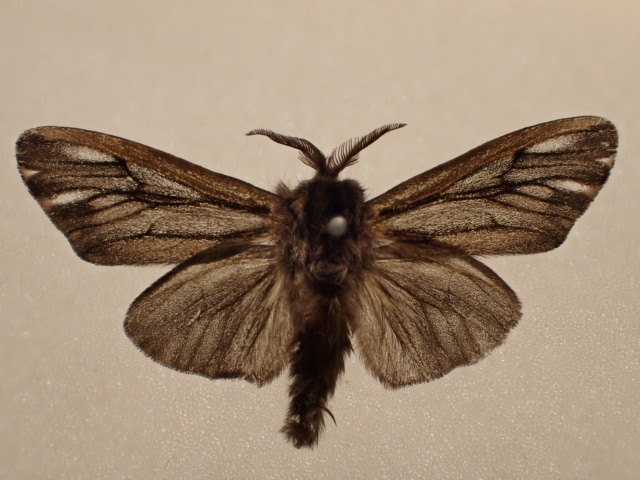 Arthropod silk is known as a versatile tool, and its variability makes it an attractive bioma- terial. Eumeta variegata is a bagworm moth (Lepidoptera, Psychidae) that uses silk throughout all life stages. An understanding at the molecular level of bagworm silk is an opportunity to expand the possibilities for artificial biomaterial design.