A fossilised gill skeleton in an early shark relative

The form of the pharynx in the earliest jawed vertebrates has major implications for the evolution of feeding and respiration. However, we don’t really know what it looked like, partly due to the rarity of pharyngeal fossilisation in Palaeozoic jawed vertebrates. In our Nature Communications paper, we describe our discovery of the earliest-known three-dimensional pharynx in an early relative of sharks, which looks tantalisingly like that of bony fishes.
Richard Dearden
PhD Student, Imperial College London
Follow
Like Liked by Patrick Goymer and 1 other
0

Our understanding of the origin of jaws is hampered by the poor fossil preservation of pharyngeal morphology. Here, Dearden et al. provide insight into the skull conditions of early jawed vertebrates through three-dimensional computed tomography imaging of a 415 million year old stem-chondrichthyan.

Everyone “knows” that sharks are ancient. Scientists sometimes assume this too, using sharks as a model for the anatomy of the ancestral jawed vertebrate while building hypotheses about the evolution of processes like feeding and ventilation. But is shark anatomy really “ancestral”? Does it merit sharks’ role as a primitive proxy?

Palaeontological discoveries increasingly suggest not, at least for bony parts like sharks’ shagreen of tiny scales. For internal, cartilaginous structures, such as the skull, gills, and fins, the answer is far less clear; they rarely fossilise at all, let alone informatively in three-dimensions. Important anatomical differences between sharks and other, bony, fishes remain poorly understood.

In our paper we tackle one of these differences: the origins of the extended, gill-slitted, pharynx of sharks as compared to the compact, operculate pharynx of bony fishes. We were able to do this with the discovery of an exceptionally fossilised pharynx in a very early shark relative: Ptomacanthus.

Differences in position of the pharynx between a shark (left panels) and bony fish (right panels). Photos from Wikimedia.

The origins of this discovery lie in the PhD of Martin Brazeau (my PhD supervisor), when he worked on specimens of Ptomacanthus in the Natural History Museum (NHM), London. Ptomacanthus hails from the Early Devonian (~415 million years ago) and is a very early member of the group to which living sharks belong. It is one of several exceptionally well-preserved fossils collected from Wayne Herbert Quarry (Herefordshire, UK) in the early 20th century, most of which were prepared by etching the fossil with acid to leave a mould.

Martin realised that in one of these etched specimens, a flattened Ptomacanthus head, was the fish’s braincase. The preservation of this part of the skull in an early relative of sharks is vanishingly rare, and the discovery prompted an extensive reassessment of early vertebrate relationships. The fact it was preserved at all was interesting though. Could more internal skeletons have escaped the acid and be lurking in Wayne Herbert specimens?

To find out, Chris Stockey spent part of his undergrad X-raying every Wayne Herbert specimen in the NHM. Most were empty. However in a single specimen - the Ptomacanthus of braincase fame - were a series of shadowy shapes. To more clearly see what these were we used micro computed tomography (μCT) –essentially a three-dimensional X-ray - to generate slices through the specimen showing contrast between the rock and anything inside.

Reconstructing the Ptomacanthus gill skeleton. Top right is a reconstruction of Ptomacanthus (from Brazeau 2012), with a blue box indicating the approximate area preserved by the block we studied. Moving anti-clockwise are shown the fossil viewed from above, an X-ray of the fossil in the same view, a tomographic slice in the sagittal plane, and the final reconstruction of the gill skeleton, shown from below, with the position of the braincase overlain. In all pictures the blue arrow indicates the forward direction.

As part of my own PhD I combed through these slices to make a three-dimensional model of what lay hidden within the rock, revealing almost the whole gill skeleton of Ptomacanthus in three dimensions! The organisation of individual gill elements is fairly shark-like. However, its position shows that, just like in a bony fish, it sat underneath the head.

By putting this new information on Ptomacanthus into a scheme of jawed vertebrate relationships we can show that the pharynx of early shark relatives, and the ancestral jawed vertebrate, was positioned like that of bony fishes. This constrains the extension of the pharynx to some point between Ptomacanthus and more shark-like animals. It's also a good example of how the intersection of modern technology, fossilised morphology, and phylogeny, can be powerful tools for reconstructing major evolutionary events. Like much else of their anatomy, the pharynx of sharks is far from primitive.

A video of the gill skeleton viewed ventrally, overlying the mould of the specimen's surface.

Thanks to Chris Stockey, Martin Brazeau, and Emma Randle for useful suggestions on this blog post. 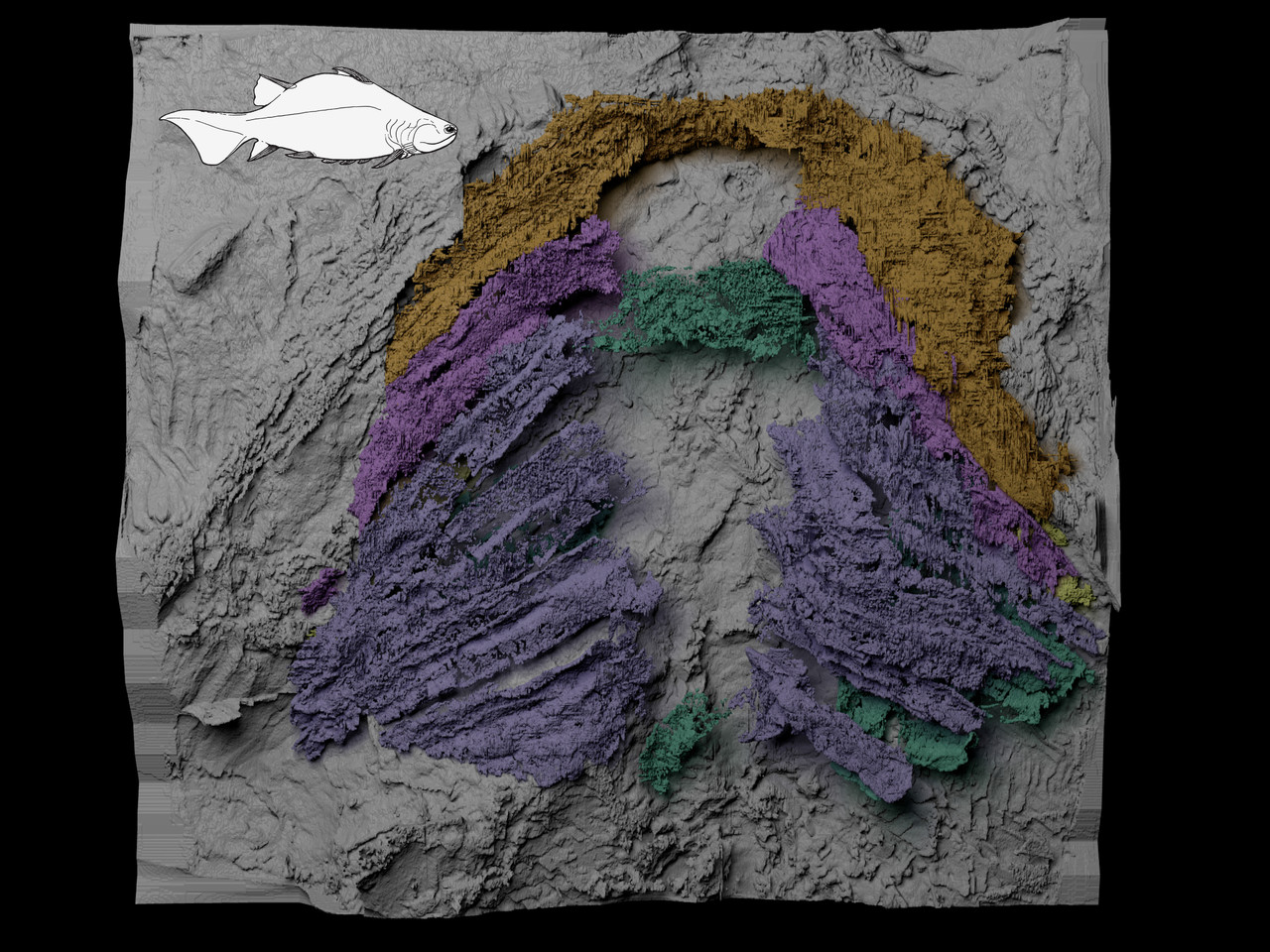 A fossilised gill skeleton in an early shark relative

The form of the pharynx in the earliest jawed vertebrates has major implications for the evolution of feeding and respiration. However, we don’t really know what it looked like, partly due to the rarity of pharyngeal fossilisation in Palaeozoic jawed vertebrates. In our Nature Communications paper, we describe our discovery of the earliest-known three-dimensional pharynx in an early relative of sharks, which looks tantalisingly like that of bony fishes.