Carnival. Copacabana. Beach. Football. Those are the first images that spring into anyone’s mind when the subject is Brazil.

But looking more carefully into Brazil’s current political instability reveals a reality that is everything but joy and happiness – particularly for science, technology, and education.

Things are bad. Not the kind of ‘bad’ that we can live with; it is not a matter of getting used to new ways of doing things. It is bad in a sense that the major educational hubs of Latin American can vanish by the end of 2019.

Recent government actions to reduce the budget of public federal universities have left the leading institutions of the country astray. The oldest university in Brazil, the Federal University of Paraná with more than 100 years, has now experienced a 30% reduction in its budget, a total of 48 million reais (c. US$12.2 million). Unfortunately, this is not an isolated case. Nationwide, the cuts amount to 5.8 billion reais (c. US$2.1 billion).

But hold on! Things get worse.

Institutions are pushing back. The rector of Federal University of Paraná – Ricardo Marcelo Fonseca – has expressed his concerns about the future of public education in Brazil. Students around the country have organised protests and rallies to express their discontentment regarding the matter. A national rally is scheduled to happened on the 15th of May. Social media, TV, and radio are highlighting the many achievements of public institutions and their alumni in an attempt to inform the wider population of the importance of public education for the society.

Sadly though, politics are deaf. This is because politics in Brazil has become a public way to express personal views, and the loud-and-clear voice of the people in favour of public education remains deliberately unheard. We therefore need international support to protect our public institutions. Brazil is a Portuguese speaking country, so big as to become self-centred in South America. As a result, there are relatively few English-proficient persons capable of (and interested in) communicating the extent of the country’s problems to the international community. As Brazilians, we need media platforms that enable us to express the dimensions and nuances of the problems in the country, thereby allowing for the world to see the disastrous trajectory that Brazil has adopted for its future. We need to have a voice! Only then we will be able conceive the emotional, cultural, and political distress caused by this catastrophe.

If we lose this battle and public federal universities are strangled to death financially, we will not only lose the knowledge produced by public institutions, but also the opportunity for talented young minds to reach their dreams and contribute with new discoveries that can change the future of our planet.

And in a country with extreme social differences as Brazil, the hope for an opportunity to study is all we’ve got.

Don’t let them take that away from us. Please share and let other people know the struggle.

Juliano Morimoto
Academic Fellow, University of Aberdeen
Follow
Dr Morimoto is an entomologist interested in developmental ecology of insect larvae. He is an advocate for true equality of opportunity to all in STEM, aiming to make academic institutions and academia, fair.

Rodrigo Xavier
over 3 years ago

Quite true, but the country is broke, It doesnt have money to do anything. We have more than 13 Million people uneployeed, people that have a Master and speak english as myself. My nice os taking a Master in Engineering because she didnt find any job when she took her bachelor degree 2 Years Ago - and still looking for something, but the economy is getting smaller year after year. So basically It doesnt worth taking a Master or a PHd in Brazil, because ALL you can do os framed your title and put at your wall.

The Best thing you can do in Brazil is study abroad to get out from this giant trap that becomes this Republic of Bananas. No justice, senate and deputies looking at your own interests, corruption at everywhere, problems of solvency to pay debts and the concern is about the master degrees ... Sorry but you know nothing from Brazil.

And Just to conclude my allegations, this is not the First time that happen something like this in Brazil, this contingency had happened other 3 times along the last 16 Years ( no one says anything about that , but Ok) , the First time, my sister in law, that was taking a PHd in microbiology, loose her government aid - but she was so good, and never gave up, then she send her studies to Michigan University ... Of course that she moved to US, and she never, ever , think for a Second to return to Brazil.

Alessandra Schneider
over 3 years ago

I'm sorry, Rodrigo Xavier, but your comment shows a narrow, partial, personal and selfish view of the situation in Brazil and the importance of education and science for our development.
It really is a shame that there are so many Brazilians who think the same way you do.
But I am sure that we - students, professors and researchers - with the support of our colleagues from around the world, will rescue our science and country again.
Even without government resources, we will spare no effort to help build a more dignified and just country for our people, as well as preserve our natural resources, which are fundamental for the balance of our planet.

First, thank you very much for the comment. It is really important that people speak up here so we can listen to different opinions.

Second, you mentioned that I don't know anything about Brazil. I myself am Brazilian, and have my degree from Brazil (Universidade Federal do Paraná) (see  https://www.ufpr.br/portalufpr/noticias/brasileiro-mais-jovem-a-conquistar-doutorado-egresso-da-ufpr-e-eleito-membro-de-instituicoes-internacionais-de-biologia/). So I do know about Brazil – maybe not as much as you but I do have some understanding of the country and the educational system.

Third, I totally agree that there are bigger issues that affect the country, and that education itself is only the tip of the iceberg. As you mentioned, corruption, unemployment, inflation etc are all a huge factor in our country. However, I disagree when you blame the country itself for its problems.  You said that "the problem is not the money to study" and I truly disagree with this statement.

In Brazil, the massive social differences preclude low-income people to have the opportunity to study. As a result, we lose talent, innovation, and discoveries. On top of that, public institutions are often neglected by the government (and to some extent, by their own administration), which leads to the wrecking ('sucateamento') of these institutions and lower-than-optimal science outputs.

In short, while I agree with you that there are more problems in Brazil, the government's policy against public universities is really a massive issue to the future of our country – and needs to be stopped.

Agreed 100%! Thank you very much Alessandra Schneider. I am glad we can join forces in this battle.

Gisele Silvestre
over 3 years ago
Juliano Morimoto thank you for your report; it's another wake-up call ..... And I also thank Alessandra Schneider for her sensate comment. I see you, and I know we're not alone. Thank you!

Filipe Dezordi
over 3 years ago

Hi Juliano, I make a translation to Portugues, available in:

There is any problem?

Thanks for your text !

No problem at all. I had a look and all credits seem to be given appropriately. Thank you very much for the translation and let's keep spreading the word around our country and the world.

Filipe Dezordi
over 3 years ago

Alcides Ellert
over 3 years ago

While much information contained in the text above is accurate, some information is incorrect.
The author states that 30% of the education budget was cut, which is not true.
The government made a contingency of 30% of the money from the Universities which had already earned, but which has not yet been proven before the treasury, and the destinity of this public money.
In fact, the current Brazilian government was very correct.
There is a very strong complaint from those who have lost the last (opposition) elections, because many "rotten" are being duly shown to Brazilian society and to the world; showing the level of corruption, moral, educational, economic backwardness to which the country has been exposed in the last 20 years; since the arrival of FHC (Fernado Henrique Cardoso) the Presidency of the Republic.
It is up to each Brazilian to do his part.
And this begins when the truth is spoken and the truth is published, because paper accepts everything; including lies.

What advices would you give to yourself when you started?

Can flies teach us about diet self-medication?

The Twelfth Labour of Scientists: The Peer Review process

Beauty of the little beasts: the complex ecology of 'simple' insect larvae 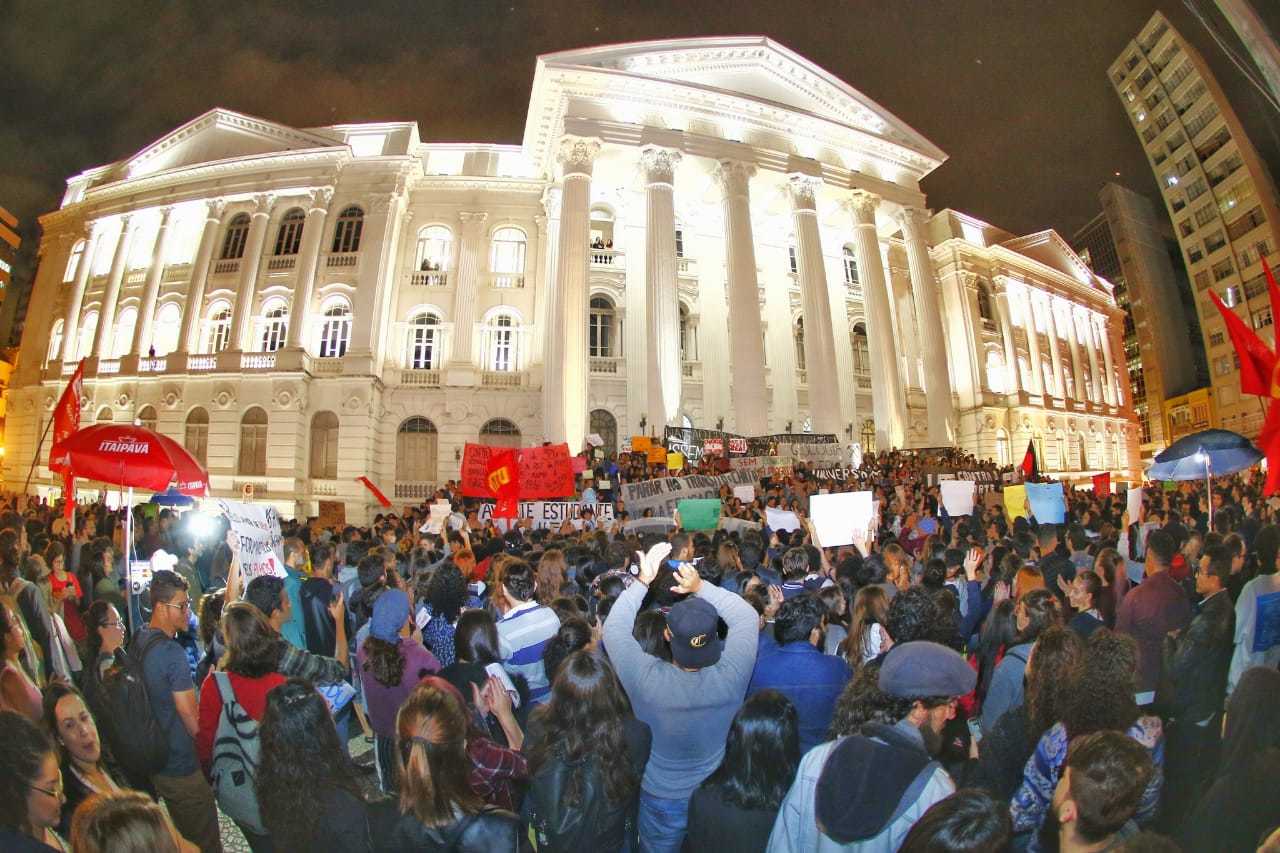