Pheomelanin pigment remnants mapped in fossils of an extinct mammal

Why do things look the way they do? Subtleties of understanding shape and colour are a tremendous driver of scientific curiosity.
Roy A Wogelius
Professor, University of Manchester
Follow
Like Liked by Ben Johnson and 1 other
0

Chemical imaging and spectroscopy have previously been used to identify eumelanin residue in fossils and infer dark coloration. Here, Manning and colleagues develop an approach to identify pheomelanin (red pigment) residues and ascertain their distribution in fossils.

My specialty is geochemistry, and I am interested in the atomic-scale processes that shape and colour the natural world, from electron-transfer processes that change the interaction of transition metals with visible light, to bond strength variabilities among silicate minerals that place controls on how mountain ranges weather away to sand. But it wasn’t until one of my palaeontologist colleagues at the University of Manchester, Prof. Phil Manning, began showing me exceptionally preserved fossils that I began wondering why some fossils exhibited striking structural detail beyond mere bone preservation. For example, look at the fossil below, which is the subject of our recent publication in Nature Communications. The bony tail and feet are obvious, but the ears and fur can also be easily distinguished. This is an approximately 3 million year old mouse, about 8 centimeters long, sampled from a special fossil locality in Germany called Willershausen. The dark coloured arch above the mouse is a blade of grass, also well-preserved.

What is the chemistry of the obvious soft-tissue remains? It is clearly different from the light-coloured sedimentary matrix. Our research group at Manchester has focussed on this question for over a decade, and what we have learned is that sometimes there is trace chemistry from the original organism locked up in such exceptionally preserved material. In a previous study of feather residue from a 120-million year old ancient bird species we resolved that organic Cu species can be detected which are identical to Cu compounds found in modern black pigmented feathers and hair. Black colour is typically caused by the dark pigment called eumelanin, probably the most ubiquitous pigment in the animal kingdom. We noticed something similar a few years ago in a study of soft tissue remains of an ancient tadpole, but this time with respect to organic Zn compounds. We had a hunch that this might be related to another pigment, pheomelanin, a pigment related to eumelanin but responsible for red and yellow colours in animals. The problem was that we could find no published work on the coordination chemistry of metals within pheomelanin. So we had to take the long way around, by performing our own careful study of the chemistry of pheomelanin.

We were fortunate to have several hard-working and creative PhD students at the time (Nick Edwards, Jennifer Anne, Arjen van Veelen) who helped us through hours of synchrotron analyses at the Stanford Synchrotron Radiation Laboratory (SSRL) and at the Diamond Light Source (DLS).  Our friends in the USA at Stanford (Uwe Bergmann), in Japan at the Fujita Health University (Kazumasa Wakamatsu and Shosuke Ito) and here in the UK at DLS (Konstantin Ignatyev) also helped greatly in completing this fundamental work. We published the first comprehensive synchrotron study of pheomelanin three years ago, and those results provided the foundation to continue work on melanin pigments in the fossil record.

Now, consider what the mouse looks like in a false colour X-ray image taken at SSRL.

The blue is calcium in the bones. Green is zinc, and red is a special image of sulfur which can only be done using a synchrotron source, because we have tuned the beam so that we see only organic sulfur. Yellow is where organic sulfur and zinc are strongly correlated. Analyses within the bright yellow regions detect a chemical configuration of organic zinc that is identical to the coordination of zinc within red hair or red bird feathers. Our hunch concerning organic Zn species as a possible clue to remnants of pheomelanin was therefore borne out, and allowed us to conclude that this extinct species of field mouse was almost certainly rich in pheomelanin pigment within its fur- similar to the pigmentation of its extant relatives. Our group is excited by the potential that our approach represents in terms of interpreting fossil chemistry and understanding pigments in ancient life. 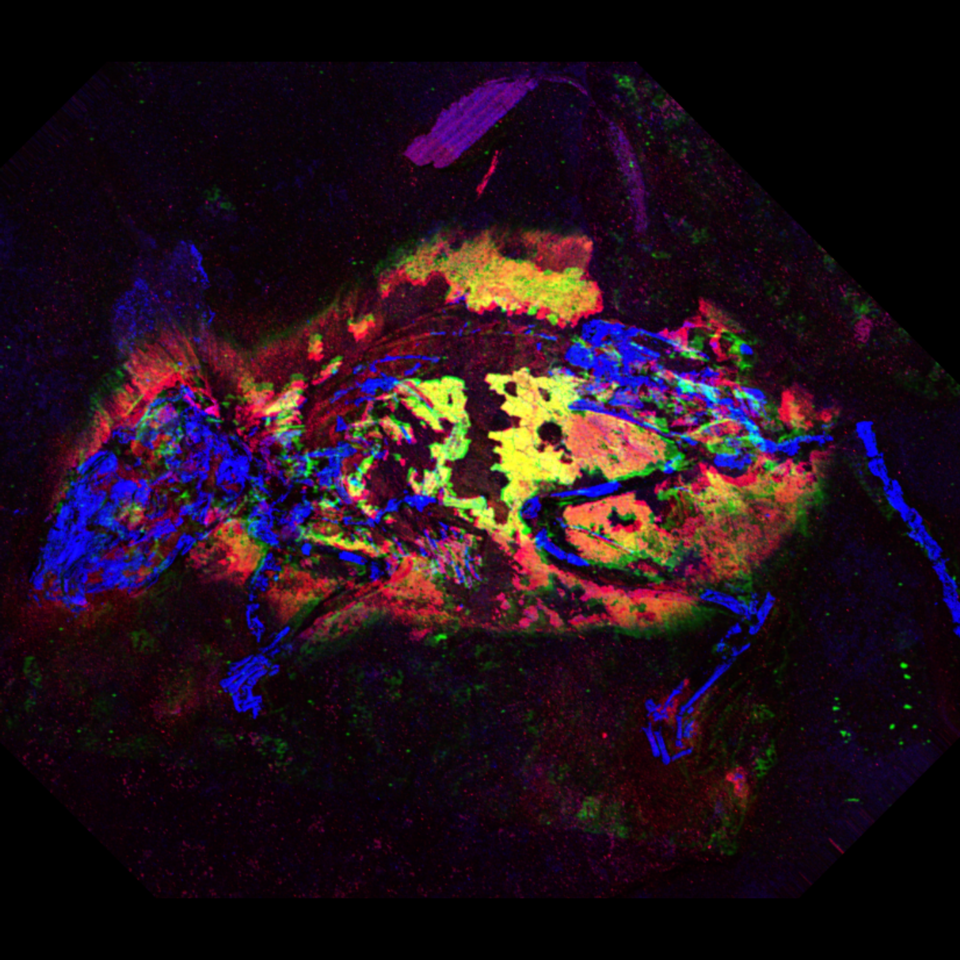 Pheomelanin pigment remnants mapped in fossils of an extinct mammal

Why do things look the way they do? Subtleties of understanding shape and colour are a tremendous driver of scientific curiosity.