Modelling ancestral morphologies to understand the origin of our species

Modern humans appeared in Africa at the end of the Middle Pleistocene, between 300,000 and 200,000 years ago. However, the processes at the origin of our species remain unclear because there is only a handful of relatively complete fossil specimens from the last half million years in Africa.

Here, we use modelling and 3D imaging to increase this small fossil sample virtually by creating a range of possible morphologies for the ancestral population to modern humans. By analysing together the few available fossils which could represent ancestors to modern humans and our computed ancestral forms we show that it is likely that several, morphologically distinct fossil populations existed in Africa at this time. Some of those, southern and eastern African local populations, may have merged to form our species, while others, possibly represented by northern African fossils, may have played a different role by contributing to the evolution of the Neandertals.

Paleoanthropological studies are limited by the very object they are studying: the fossil record. The fossils are, at best, rare and in most cases, poorly preserved. As an example, the entire cranial hominin African fossil record for the Late Middle Pleistocene (i.e. LMP, ~350,000 to ~130,000 years ago) which corresponds to the period when Homo sapiens evolved, is composed of less than ten well-preserved adult specimens. The obvious way around this inherent problem is to discover more sites and more fossils. However, and despite numerous efforts from many research teams (including ours), the fossil record remains, and will most likely always be, an incomplete, arbitrary representation of the past.

In the past 10 years, computational tools to build phylogenetic models from which ancestral morphologies can be drawn have become available to a wider community. For palaeoanthroplogists, those tools represent an opportunity to test hypotheses using hypothetical ancestral morphologies which can fill up gaps in the fossil record as well as be compared to the actual fossil specimens.

In 2013, Gómez-Robles and colleagues1 used such an approach to compute possible ancestral morphologies for hominin teeth. Their results provided a fresh look at an old question and, with Marta Mirazón Lahr, we decided to apply a similar approach to compute possible ancestral morphologies of the full cranium. A preliminary study, published in 20162, addressed the issue of the common origin of Neandertals and modern humans. The results were surprising, suggesting a ~7000,000 years old split time between the two sister lineages, some 300,000 years older than previously advocated.

Those encouraging results led us to address the complex and debated question of the origin of our species. This topic has benefitted from the recent accumulation of genomic evidence regarding the peopling of the world by Homo sapiens and its evolutionary history. We use a combination of genomic and fossil data to frame well-supported possible phylogenetic histories for the genus Homo using 29 hominin populations, among which 21 represent the modern human dispersal into the old and new worlds. However, from a palaeoanthropological perspective, answering the question of our origin remains difficult, as we can only rely on the study of five well-preserved fossil specimens. We modelled four new ancestral phenotypes for Homo sapiens, and extended significantly the range of morphological boundaries and probabilities of likely ancestral populations to Homo sapiens.

But besides offering new insights into how our ancestors may have looked like, the statistical comparison of our virtual ancestors to the five relatively well-preserved African fossils from the key period gave us unique insights about the time frame and geographical origin of Homo sapiens. The degree of morphological divergence observed between the hypothetical ancestors, the African fossils, Neandertals, and modern human populations, strongly suggests that different human lineages existed in Africa at the time of the emergence of Homo sapiens. Not all of them contributed to our ancestry, becoming extinct in Africa as the Neandertals and Denisovans did in Eurasia. However, our study supports a model in which Homo sapiens is the result of a coalescence process between southern and eastern African LMP populations, while other populations, possibly some northern African population, may have also played a role in the evolution of the Neandertals. 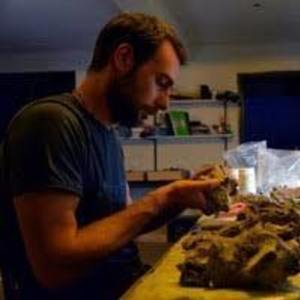 I am a CNRS palaeoanthropologist working at the UMR 7194 Histoire Naturelle de l'Homme Préhistorique based at the Musée de l'Homme in Paris. I am also a Research Fellow at the Leverhulme Centre for Human Evolutionary Studies (University of Cambridge). As a paleoanthropologist, my research aims are to understand what makes us human and the underlying processes that shaped our species. In this framework, I study the fossil record of the genus Homo through multiple perspectives, using interdisciplinary, and innovative computational tools. Besides comparative morphology and numerical taxonomy tools, I am using 3D geometric morphometrics to analyse the fossil record. I am collaborating in various research and archaeological fieldwork projects (e.g. the In Africa project) and I am developing a new archaeological fieldwork project in West-Turkana, Kenya (the Trans-Evol project) in partnership with the LCHES (University of Cambridge), the Turkana Basin Institute and the National Museums of Kenya. Finally, I am co-editor in chief of the oldest Biological Anthropology scientific journal: the BMSAP (Bulletin et Mémoires de la Société d'Anthropology de Paris) which was created in 1859.
Follow