Not so fast: Ancient proteins shed light on sloth evolution

We are often thrilled by the speed of new scientific breakthroughs, but equally often progress moves slowly, sluggishly, even slothfully. Case in point: with the help of ancient biomolecules, scientists show how living and extinct sloths are related to one another.

Although it is certainly not obvious from their present diversity—just 6 species in two genera—the tree sloths of Central and South America represent the last vestiges of a major experiment in placental evolution. The living two- and three-toed sloths are exclusively tropical, but during favourable intervals in the Pleistocene their extinct relatives were distributed from Alaska to southernmost South America. In earlier times sloths reached the West Indies, and possibly even Antarctica.

These early sloths came in many shapes and sizes, most of them very different from the tree sloths of today. Some were giant, like Megatherium; the terminal species of this genus were the size of elephants. At least one lineage, the thalassocnines, became thoroughly aquatic and foraged in the seas off the west coast of South America. Most groups progressively declined during the late Cenozoic, eventually leaving only the tree sloths and—surprisingly—a few species in the Greater Antilles that finally disappeared only five or six thousand years ago.

Systematic biologists have pondered the relationships of living and extinct sloths for almost 250 years. But the story is complicated: although palaeontologists have discovered a startling array of fossil species, a number of finds are difficult to fit into existing taxonomic schemes. Until recently, all such efforts were based on morphology; now, however, ancient biomolecules have begun to play an important role in testing old ideas and proposing new ones.

As a palaeomammalogist, I have long been interested in the use of ancient DNA in systematic studies of late Quaternary mammals. However, because efforts to gain genomic information from sloth fossils had been largely unsuccessful, I wondered whether we could make progress using a quite different source of molecular information, namely the structural proteins that are normal components of bones and teeth. If well preserved, the amino acids comprising such proteins can be sequenced, providing information in a form that can be easily adapted for use in phylogenetic studies.

With the help of palaeoproteomics expert Matthew Collins (Universities of Copenhagen & Cambridge), an analytics team was put together consisting of Samantha Presslee (University of York), Graham Slater (University of Chicago), Francois Pujos (CONICET, Mendoza), and Brian Chait (Rockefeller University), with the active support of many palaeontologists who supplied both specimens and ideas. Our protein of choice was “bone” collagen, which makes up almost all of the organic component of vertebrate bones and is often present in quantity in well preserved fossils.

Representatives of major sloth groups. In the tree, going clockwise from left: extinct West Indian sloth (Acratocnus), extant three-toed sloth or ai (Bradypus), and extant two-toed sloth or unau (Choloepus). From left to right below are representative giant ground sloths: Mylodon (South America), Megalonyx (North America), and Megatherium (South America). According to new molecular studies, Bradypus is most closely related to a group that includes Megalonyx and Megatherium. Choloepus is related to Mylodon, but Acratocnus and its West Indian kin represent a separate branch that is distinct from that of all other sloths. Human for scale: 1.8.5 m (6 ft 1 in). Credit: Jorge Blanco

Getting suitable results was time consuming, but by 2018 we had managed to cover all the groups that had survived into the last part of the Cenozoic. And what we found from our phylogenetic analyses of their sequence data was quite remarkable. The details are presented in our Nature Ecology and Evolution paper, but there is one discovery that I would like to highlight here. I was fascinated by a proposal made many years ago by an AMNH colleague, the ichthyologist Donn Rosen, who argued that some of the larger islands in the West Indies had been briefly connected with northern South America as a consequence of the tectonic motion of the Caribbean Plate. Manuel Iturralde-Vinent, a geologist from the Cuban Academy of Sciences, and I put this idea into a testable form as the GAARlandia hypothesis. In both Cuba and Puerto Rico we discovered remains of early sloths that seemed consistent with the idea that their ancestors reached the Greater Antilles over a landbridge some 33-34 million years ago.

At the time this conclusion was controversial because our supporting fossil evidence was slim. Imagine our delight when analysis of the palaeoproteomic evidence indicated that the Antillean sloth radiation had diverged from all related lineages about 30 million years ago, making it the sister-group of other sloths. Much remains to be done to confirm this finding and its relevance to paleobiogeography, but it has already found support in an ancient DNA study led by Frederic Delsuc (University of Montpellier) and Hendrik Poinar (McMaster University), in which I also participated. This study relied on mitogenomic evidence, whereas the genes specifying collagen are nuclear.

That the two sets of results agreed in detail, despite varying substitution rates in different parts of the total genome, is certainly meaningful, but it is not definitive. Morphology will always be critically important in palaeontological studies, and molecular evidence is unlikely ever to be available for the vast majority of species. Even so, given that there is only one history of life, ancient biomolecules will surely have an important role to play in bringing that history to light in future. 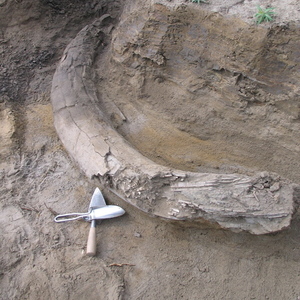 I specialize in mammalian evolution, paleobiogeography, and extinction studies. I have collected fossils in many parts of the world, including both polar regions. I am currently concentrating on the evolution of South American mammals, especially late Cenozoic groups, in collaboration with aDNA and paleoproteomic specialists.
Follow

marc verhaegen
over 2 years ago

I wonder: if palaeoproteomics can resolve sloth relationships, might there be a possibility that it could also resolve hominid relationships?  Most paleo-anthropologists assume (anthropocentrically IMO) that australopithecines are closer relatives of Homo than of Pan or Gorilla, but several students (incl. myself) independently question this assumption.

Probably, most humanlike traits in australopiths are not human-derived, but are hominid- or even hominoid-primitive (and subsequently lost in ape ancestors, probably in parallel), e.g. all hominoids (apes & humans) have centrally-placed lumbar spine, different from the dorsally-places spines of monkeys & most mammals, whichsuggests the early hominoids have vertical spines, and indeed, Miocene hominoids such as Morotopithecus had already remarkably human-like lumbar vertebras & hence probably vertical spines ('upright'), surely not for running over open plains as traditionally often believed (savanna hypothesis of human evolution), but more likely for climbing vertically (arms overhead) & possibly wading bipedally in the swamp forests where most Miocene hominoids fossilized (google "bonobo wading" or "gorilla Ndoki" for illustrations of wading apes).

If palaeoproteomics can resolve hominid relationships, morphological comparisons suggest IMO (see e.g. my 1994, 1996 & 2013 papers in Human Evolution) that most if not all australopiths might be closer relatives of Pan or Gorilla than of Homo, and more specifically that most East-African australopiths are more closely related to Gorilla than to Homo or Pan, and South-African apiths are more closely related to Pan than to Homo, and much less to Gorilla (refs in google "ape and human evolution 2018 Verhaegen").

I'd very much like to see the resluts of such studies, but perhaps it might not be easy to get the necessary hominid fossils for such studies?

Ross MacPhee
over 2 years ago

Hi Marc, Frido Welker, Enrico Cappellini and their Copenhagen and MPI colleagues are hoping to do some of what you outline with enamel proteins (e.g. Denisovan jaw from Tibetan Plateau). Main issue will be preservation, as always.

My group is hoping to maximize our possibilities by working with mid-Pliocene fossil mammals from Ellesmere I. in Canadian Arctic Archipelago. Collagen preservation is outstanding, should be similar for enamel proteins.