When a mimicry disguise fails, sometimes the back up plan is making yourself poisonous. We discovered viceroy butterflies are more unpalatable and better chemically defended in locations with few queen models present. We are not sure how they do this yet, but it indicates sometimes mimics keep their warning signal, increase their own defenses, and live without their model thereby escaping their evolutionary dependence on the model.
Kathleen Prudic
Assistant Professor, School of Natural Resources and the Environment, University of Arizona
Follow
Like Liked by Patrick Goymer and 4 others
0

Batesian mimicry seems like a peculiar way to avoid being eaten in the grand scheme of things. An edible mimic resembles a noticeable and toxic member of the community known as a model. Imitation is more than a form of flattery, it is a path to survival. However, this path may lead the mimic to a place of no return evolutionary speaking, especially when the model is no longer present in the community. Breakups are hard in mimicry, very hard. A mimic has a few options if the model goes its own separate way: the mimic can leave the community itself or it can (re)-evolve a less conspicuous signal so that predators have a harder time discerning them as prey. For me, there was always another possibility, can a mimic change its taste? Meaning can it be more unprofitable in places without the model without changing its appearance? This has been deemed unlikely because becoming unprofitable seems like a complicated evolutionary transition, but then again, if selection is strong enough, all bets may be off. It took a multi-disciplinary team, several field seasons, a few hurricanes, new technology, and many, many swear words to find out. These findings were published in Communications Biology.

Butterflies are well known for their mimetic tendencies. Henry Bates frequently corresponded with Alfred Wallace on butterfly mimicry, contributing to the original development of the theory of natural selection. Butterfly mimicry investigations have also moved many areas within evolution and ecology forward, from genomics to chemical ecology to ethology. I find butterflies enchanting creatures, a miniature land lobster with painted wings that in one part of its life is a voracious destroyer of plants then is magically transformed to a gracious, sugar swilling pollen disperser helping to make more little plants in the world. Butterflies also only fly on sunny days, beginning their activities around 10 AM and retiring around 4 PM, making for a particularly pleasant field experience. A polite group of animals who share my desire for a slow morning start relishing my second cup of coffee bookended by a fancy cocktail watching the sunset.

Back to mimicry. The viceroy butterfly is a star in mimicry circles. You might have seen it in your introductory biology textbook coupled with a picture of a vomiting blue jay. The viceroy was originally described as a Batesian mimic of the queen and monarch butterflies. Both queens and monarchs are anything but regal in the taste department. They contain cardiac glycosides, or heart poisons, acquired from their larval hostplants, milkweeds and milkvines. These compounds also solicit an emetic response in many predators such as the famously photographed blue jay. My co-author, Dave Ritland, discovered something peculiar during his PhD research: viceroy mimics are not always palatable Batesian mimics, instead they are sometimes quite unpalatable themselves moving along the Batesian-Mullerian mimicry continuum in unpredictable ways. This nuance was difficult to capture in our writing. Dave and I spent many hours hashing it out, hoping to capture the complexity without getting bogged down in details. Thankfully, we have known each other for over 20 years, so we were able to navigate this challenge with much laughter and only the occasional curse, but I get ahead of myself.

Critical to interpreting Dave’s previous findings was a geographic consideration. Many of his viceroys haled from northern Florida where the queen model has lower abundance than in southern Florida, where the original viceroys had been evaluated for their palatability. Could this be an ideal system to evaluate how model abundance interacts with mimic defense? My PhD committee and NSF both thought it was, so what possibly could go wrong? Turns out, many things. Finding the right field sites was an adventure taking an entire summer to figure out. The typical subtropical complications of wild pigs, snakes, and quicksand created humorous life memories while the loss of two of the ten original field sites to development prompted a bit of personal grief. Extreme weather spiced up a few of the sampling bouts; between 2004-2005, eight hurricanes affected Florida, some passing directly over my field sites. And that’s just capturing the insects.

Finding the right collaborator in natural products chemistry to figure out why viceroys tasted bad sometimes but not always was a challenge. Luckily, I connected with Barbara Timmermann, a professor of pharmacognosy, then at the University of Arizona College of Pharmacy. Barbara graciously made me part of her lab. I learned from her team and used their facilities to discover what the viceroy was using to make itself unpalatable (spoiler alert: it’s salicin and other aspirin-like compounds acquired from willow, the larval hostplant). Chemical differences are great; however, if they do not translate to differences in predator avoidance, then they might not be important. Now most of the time, folks dismiss the intellectual capacity and relevance of insect predators, but not Dan Papaj. Dan is an expert on insect learning and a strong advocate of our tiny neighbors who have their own languages, collaborations, and wars. Dan was instrumental in setting up the correct experimental design for the predator bioassay, making sure how I presented the prey and how the predator responded was something I could measure accurately to answer the question at hand: are viceroys from locations with low queen abundance avoided by mantids sooner and longer?

The final bits were data analysis and visualization. Now I say that a little tongue in cheek. If I actually counted the hours involved in all these tasks, data wrangling probably accounts for half. Jeff Oliver handled much of the more difficult R code for both the spatial analytics and visualization saving me from completely losing my mind. His GitHub repository has all of the gory details and is a stellar example of open data practices. From here, I wrote the first draft, and as I mentioned before, the fun of crafting the narrative soon began. Where are the limits of our data? What can we really say about how this informs our thinking on mimicry across all organisms, animals, butterflies, and our little clade of butterflies? Many iterations, conversations, and discussions followed with only Google Doc keeping track of which co-author got the final say.

We decided to aim high for this paper and went through the Nature Journal family pipeline when it found a review home at Nature Communications Biology. The chief editor, Brooke LaFlamme, has an amazing vision for this new open access journal so even without an impact factor all co-authors were excited. The reviewers and editors did not disappoint. This was one of the most professional experiences I’ve had as a scientist. The reviewers were insightful, helpful, and focused on making ours a better manuscript. The editors, especially Dominique Morneau, were all direct, confident, and organized, making even the pile of post-acceptance paperwork and social media promotion a breeze, especially when I took the time to read my email carefully (sigh #PBKAC). Post-publication there was a flurry of engagement opportunities with the press with the help of Emily Walla, University of Arizona undergraduate and NASA Space Grant Intern in science communication, culminating in an interview on CBC Quirks and Quarks with Bob McDonald.

This adventure, and it was an adventure, was about both the question and the people. It takes collaboration, laughter, and more than one cup of coffee to make the discovery enterprise we call science work. Here we discovered more about mimicry, expanding our view of how this hallmark example of natural selection forms and functions in space and time. There are many new paths to take from here. How does the viceroy change spatially in palatability and chemical defense? Why isn’t the queen very abundant in northern Florida and will environmental change facilitate their increase? Does climate change impact mimicry relationships and if so, how can we predict the mode, magnitude, and duration of changes? For me, I feel the importance of climate change on biodiversity is the utmost research question of our time and that is motivating my current research endeavors.

Kathleen Prudic
Assistant Professor, School of Natural Resources and the Environment, University of Arizona
Follow
I study where pollinators are, what they are doing, and how we can help them in a rapidly changing world using citizen and data science techniques I am co-director of eButterfly, an online citizen science platform that harnesses the observations of thousands of butterfly enthusiasts across the globe to understand how and when butterflies and other pollinators react to environmental changes. My research encompasses precision conservation, human-computer networks, and data science. My discoveries have been published in as Science, Proceedings of the National Academy, Proceedings of the Royal Society B and Behavioral Ecology and covered by Associated Press, BBC, CBC, National Geographic and Smithsonian Magazine. 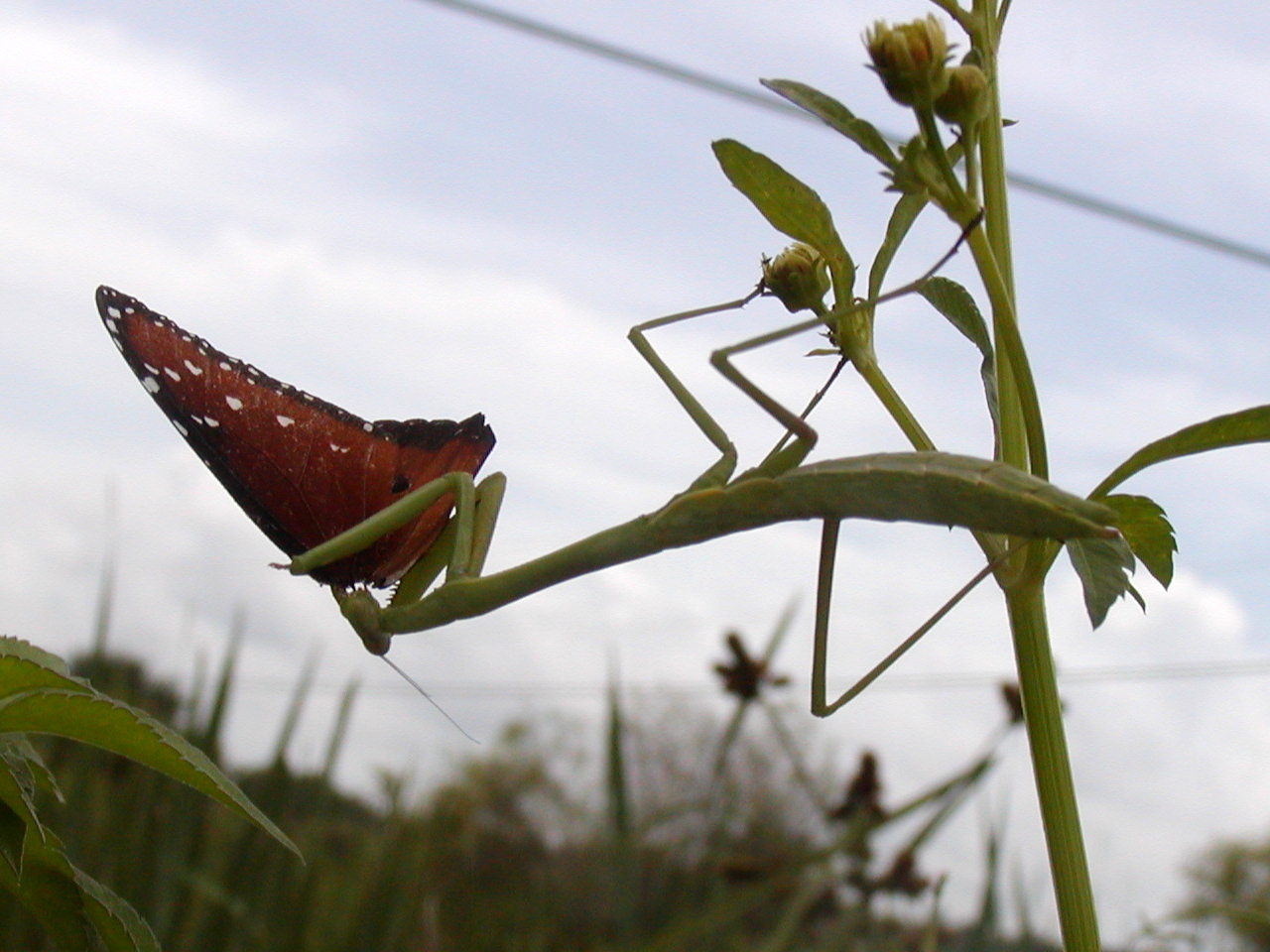 When a mimicry disguise fails, sometimes the back up plan is making yourself poisonous. We discovered viceroy butterflies are more unpalatable and better chemically defended in locations with few queen models present. We are not sure how they do this yet, but it indicates sometimes mimics keep their warning signal, increase their own defenses, and live without their model thereby escaping their evolutionary dependence on the model.