What facilitates adaptive radiation in a changing climate?
Jake Daane
Postdoc, Northeastern University
Follow
Liked by Gao Jianguo and 2 others

Phylogenetic comparative analysis of Antarctic notothenioid fishes reveals a burst of genomic diversification and evolution of key skeletal modifications before the onset of polar conditions in the Southern Ocean.

The paper in Nature Ecology & Evolution is here:

When observing the great diversity of life, one can’t help but marvel at how well adapted species are to their environments and lifestyles. Whether it is the camouflage of a moth hiding in plain sight against a lichen-covered log or the aerodynamic beak of a kingfisher penetrating the surface of the water in pursuit of a fish, species have specific structural and physiological adaptations to take advantage of ecological opportunities.  However, in many cases organisms descend from a series of ancestors that likely looked and behaved quite differently than the modern form.

One of the major questions in evolutionary biology is the timing of adaptive change.  Do key evolutionary innovations occur in response to a changing environment, or are there happy accidents in which traits that have already evolved become adaptive when opportunity presents itself? This question takes on a renewed importance in the face of major human-induced ecological disturbance, where species are challenged to adapt rapidly to an increasingly hostile environment.  Can we look to past climate upheavals to find patterns in how species diversified in the face of environmental change?

Antarctic fishes are one of the iconic examples of organismal adaptation to a changing environment.  Antarctica is cold and, for humans at least, a truly inhospitable place.  Temperatures are below freezing year round, the sun disappears from large parts of the continent for months at a time, and the land surface is covered by enormous glaciers that periodically calve icebergs that scrape the sea floor clean as they move into the Southern Ocean. Because ice is constantly forming and melting in the salty water, organisms that do not generate their own heat are at risk of freezing solid.  The ocean is so cold that Antarctic fishes, which synthesize protective antifreeze proteins, nonetheless carry a burden of ice crystals in their organs and tissues.

Antarctica wasn’t always this way.  In fact, the Southern Ocean surrounding the continent was reasonably warm and filled with a cosmopolitan array of species as recently as 35 million years ago, when the Antarctic continent was still connected by land to South America and Australia.  Once continental drift separated Antarctica from these continents, a strong oceanic current formed around Antarctica, isolating it thermally and leading to terrestrial and oceanic cooling.  Although most fishes that once lived in the Southern Ocean left the scene, the common ancestor of the notothenioid suborder of perciform fishes paradoxically thrived.  In fact, this fish group has diversified greatly during the last 20 million years, so much so that the single common ancestor gave rise to more than 120 descendant species that today account for roughly 90% of the fish biomass in the Southern Ocean. That’s one lineage of fishes simply dominating the fish diversity of an entire ocean. Notothenioids are now central cogs in the Antarctic food web and are an iconic example of an adaptive response to global climate change.

Why did the Antarctic notothenioids become so successful?  To approach this question, we sought to acquire genetic information from large numbers of Antarctic fishes and to compare them with closely related species that did not adapt to life in the Antarctic.  We were faced with a challenge: how to capture genetic diversity from a large number of species? Despite major advances in sequencing technology and new computer algorithms, assembling high quality genomes is still a time and resource intensive endeavor.  Furthermore, most of the genomic DNA of any two species differs so greatly in sequence that one is confounded to know what to compare. Rather than sequence a few notothenioid genomes and then ignore most of the DNA when comparing them, we decided it would be more efficient to apply an approach called targeted sequencing to a large number of species.  Much like fishing, we baited our hooks for selected DNA regions of interest from the whole genomic pool of each species. DNA fragments that were similar to regions of interest would bind to the baits, allowing the authors to sequence roughly 250,000 total regions of interest from 46 species.

There is an additional challenge: how do we get tissue samples from species that thrive in one of the least accessible locations on the planet? Because we didn’t need pristine DNA samples for this type of sequencing, we were able to use tissue samples collected from decades of Antarctic expeditions conducted by ourselves and our collaborators.   This allowed us to sequence species that are rare and expensive to collect. That said, freezer diving for tissue biopsies in a decommissioned Boston-area military bunker at the Northeastern Marine Science Center isn’t quite as adventurous or scenic as an Antarctic expedition.

Contrary to our expectations, we found that the rate at which Antarctic notothenioid genomes accumulated mutations was not constant throughout the evolution of the group.  Rather, notothenioids received a jolt of genetic diversity long before the Southern Ocean reached freezing temperatures and well prior to adaptive radiation of the suborder. Even more puzzling, the elevated mutation rate was shared by a non-Antarctic sister species that did not diversify into multiple descendant lineages. Thus, both fishes that diversified, and those that did not, experienced a period during which their genomes rapidly accumulated novel variation.

What was the utility of all this excess genetic diversity? In part, it provided the evolutionary substrate for reducing body density. The common ancestor of the notothenioids was a negatively buoyant bottom dweller that lacked a swim bladder, which many other fish groups use like a scuba diver’s buoyancy compensator to hover in place in the water column while expending little energy. Many modern Antarctic notothenioids have compensated for this ancestral deficit by “lightening the load” caused by a dense, heavily mineralized skeleton. Thus, a key adaptation of notothenioids that enabled them to occupy the food-rich water column abandoned by temperate fishes was reduction of bone mineral density. Subsequently, multiple lineages diversified to forage in the water more efficiently. In the common ancestor of the notothenioid species that shared the elevated genetic diversity, we found evidence for diversifying selection in many genes that are known to regulate skeletal density.  Intriguingly, these genes are related to those that cause skeletal diseases in humans, a reminder that genetic traits that are adaptive in some environments may be pathological in others.

To test the hypothesis that the notothenioid gene variants actually caused reduced bone density, we turned to the zebrafish model system and gene-editing techniques. We show that disruption of some of these genes, including trip11 and col1a1a, was sufficient to cause reduction in bone mineral density like that observed in the Antarctic fishes.  Thus, notothenioids can be considered natural models for understanding genetic mechanisms of human skeletal disease.

We also wanted to address patterns of skeletal density in notothenioids to see how this trait varies during the evolutionary history of this group.  To do this, we raided the impressive collection of Antarctic fishes at the Yale Peabody Museum for adult specimens from important positions in the notothenioid phylogeny. Could we assess skeletal density in these precious samples without harming them?  Unfortunately, our specimens were too large for a commonly used technique, micro-Computed Tomography imaging.  Undaunted, we brought some unusual patients to the PET/CAT scanner at Boston Children’s Hospital.

The CAT images, although lower in resolution compared to those from micro-CT, still provided valuable information about the notothenioid bones. These data corroborated our genomic and genetic analyses, showing that a reduction in bone density was shared among all fishes that had undergone the burst of genomic diversity. Thus, when opportunity, in the form of global climate change, presented itself, notothenioids were poised to diversify to exploit the productive niches in the water column of the Southern Ocean.

It appears that much of the genomic “stuff” that made Antarctic notothenioids so successful already existed when ancient climate change produced major upheaval in their environment. Important adaptations were already in place along with a bolus of genomic diversity, allowing these fishes to rapidly diversify as environmental conditions changed.

Today, Antarctic notothenioid fishes face a new threat – global warming during the Anthropocene. Whether they and other species have time to adapt to the unprecedented rate of climatic warming and ecological change, remains a pressing issue. Or, is it possible that, like the notothenioids of 20 million years ago, species groups with pre-existing genomic diversity are waiting for their time to shine? 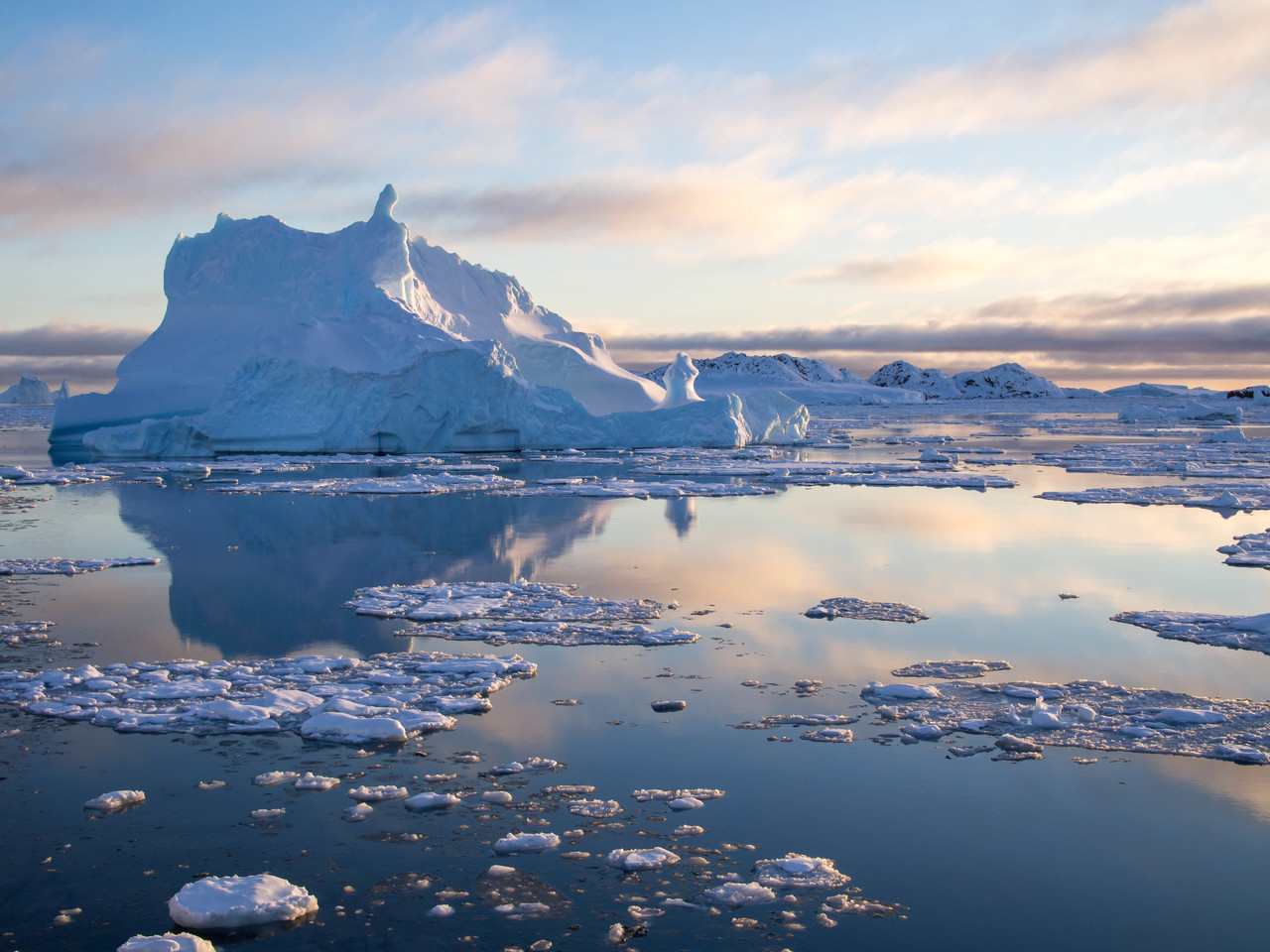 What facilitates adaptive radiation in a changing climate?