We asked the general public to help us find out if snails adapt to elevated temperatures in Dutch cities. As we illustrate in our paper in Communications Biology, it appears that they do.
Niels Kerstes
researcher urban evolution, Naturalis Biodiversity Center
Follow
Liked by Patrick Goymer and 3 others

Niels Kerstes et al. report a citizen science effort to record the shell colour and banding patterns of nearly 8000 Cepaea nemoralis snails in the Netherlands to understand the potential evolutionary effect of urban environments on that snail species. They find that snails in urban centres are more…

June 2019 was the hottest June ever recorded in the Netherlands. During the sweatiest days, at night temperatures in Dutch city centers remained several degrees higher than those in neighbouring rural areas. Not only people suffer from elevated temperatures caused by climate change and urban heat, also animals and plants that live in urbanized areas have to stand the heat.

Cepaea nemoralis, the brown-lipped snail, is an extensively studied and highly polymorphic snail. Shells of C. nemoralis can be either yellow, pink or brown and might carry up to five black spiral bands. Shell colour is known to influence the ability of the snails to withstand extreme temperatures. Darker shells absorb more thermal radiation and therefore heat up faster in the sun. Cities are relatively hot. Does this mean that C. nemoralis shells in city centers are lighter than those of conspecifics that live outside of cities?

The 2009 project Evolution Megalab illustrated that C. nemoralis ticks all the boxes of an organism well suited for citizen science. The snail is common, harmless, widespread and large enough to be observed. In addition,  shell colour and banding are genetically determined.

Although scoring shell colour seems easy enough (how hard can it be to tell if a shell is yellow, pink or brown?), in reality it is not always that straightforward. In addition, citizen scientists might mistake snails of different species for a certain C. nemoralis colour morph. When we designed our citizen science project SnailSnap, we therefore decided to take the task of categorizing shell colour morphs out of the hands of our citizen scientists. We designed an app, which we also called SnailSnap. Participants of the project only had to download the app, find snails, and use the app to take a picture of each individual snail.

Examples of photos of Cepaea nemoralis as submitted by citizen scientists

All pictures were automatically uploaded to a server, together with the GPS-coordinates of the “collection” site. A group of trained validators, mostly volunteers, then assigned colour and banding codes to all C. nemoralis individuals. This way, in 2017 citizen scientists and volunteers helped us to collect a dataset of almost 8,000 C. nemoralis distributed over the Netherlands. Using this dataset, we found that when the effect of the urban heat island is stronger, the proportion of yellow snails is higher.

Any research is challenging. Citizen science has its own challenges. Even though some concerns about sampling bias remain, we believe that our research illustrates the great potential of using a citizen science-approach to investigate urban evolution. Now we are facing the challenges of keeping citizen scientists informed, interested and motivated, and finding other organisms that are equally suited to be the focus of a citizen science-project. In our project EvoScope, we are working on it! 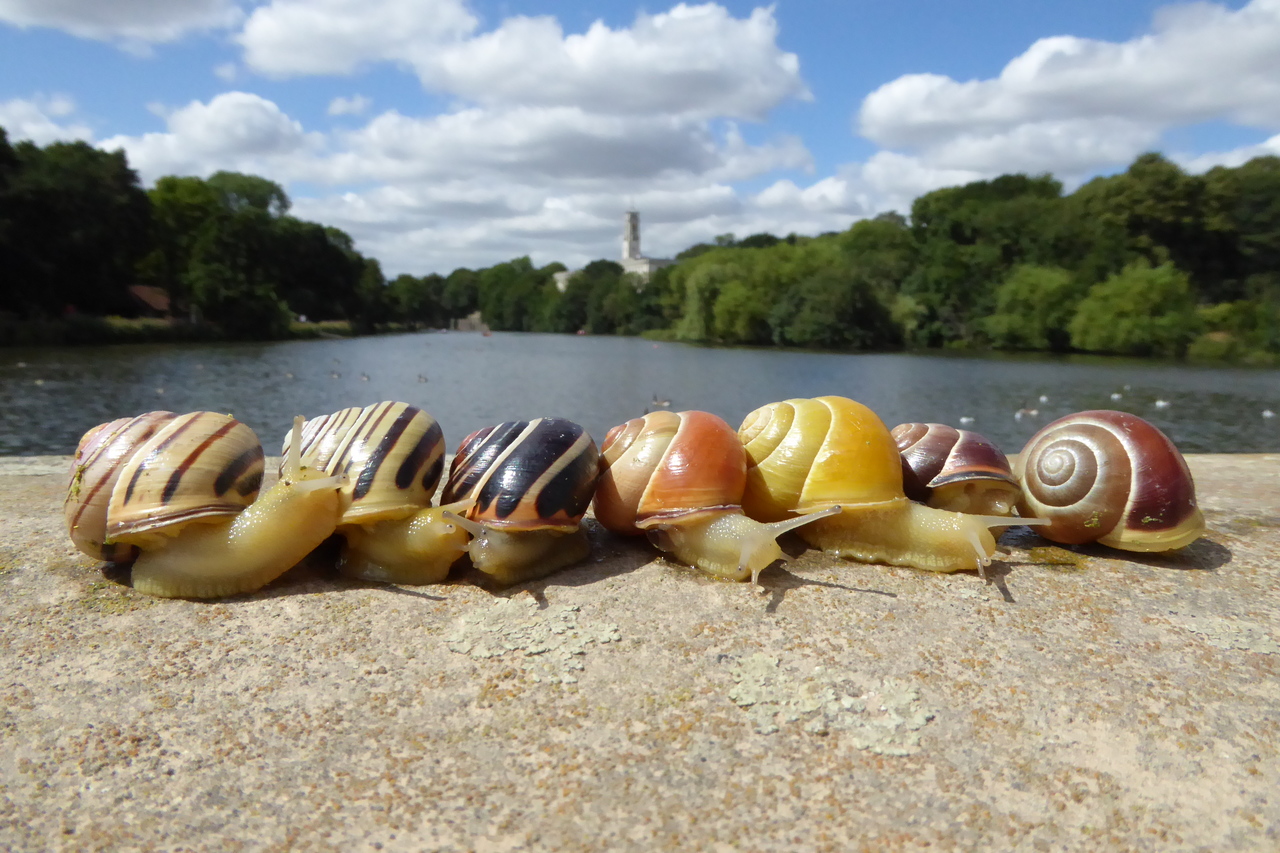 We asked the general public to help us find out if snails adapt to elevated temperatures in Dutch cities. As we illustrate in our paper in Communications Biology, it appears that they do.