Warming up the Antarctic: Harder than you think

The publication of our paper evaluating the performance of biofouling communities on heated settlement panels in the Antarctic after 18 months seriously underplays the huge amount of time and effort required to get this project to work.

At times it felt, not that we were testing the resilience of calcified worms, but more the resilience and sanity of the researchers! This long timescale was essential because Antarctic marine invertebrates react very slowly to changing condition and we were able to show that the animals were chronically affected by the long-term increase in temperature. Link to paper here: https://rdcu.be/bMfyt

This project first started in 2003, when Lloyd Peck worked with Mark Preston from the British Antarctic Survey Antarctic Marine Engineering Department to develop the prototype panels. The idea was to take standard settlement panels (squares of composite material, which mimic natural rock surfaces and used to study colonisation processes in the sea) and embed them above a heating element. This would enable us to reproducibly warm a layer of water up to 5mm thick above the panel to +1°C and +2°C above ambient water temperature, which match IPCC predictions for ocean warming by the end of the century. These panels would provide an ideal “natural” system for studying slow growing encrusting species such as bryozoans and spirorbid worms, whereby they are fully exposed to all their normal environmental fluctuations in temperature, light, water chemistry and food supply, but slightly warmer. In many ways, that was the easy bit as what followed was several years of testing,  design revision and a lot of work to build defences around the panels to stop them being smashed by icebergs in Antarctica.

Photos: In an ideal world: the heated panels, intact, on concrete blocks in South Cove and being photographed by a diver. Photographs courtesy of Terri Souster.

The first set of panels did not last long, as the original seals were not sufficient against the pressure and the panels exploded after several weeks at 15m depth. Second set: new design, all pressure tested and then something happened with the cables. Unfortunately to work out what had gone wrong involved retrieving the panels in the middle of the Antarctic winter.

Photo: Intrepid Rothera winter team 2009-2010 bashing through the winter snow and ice to retrieve the broken panels. This did involve going down rather a deep hole! Photographs courtesy of Terri Souster.

Third set of panels: hit by an iceberg (an occupational hazard when working in the Antarctic marine environment).

2014-2016: The final experiment, headed up by post doc Gail Ashton. It involved a long summer of pulling cables through ducting, deploying concrete blocks to help protect the panels from iceberg impact and a lot of hard work: Success! The rest is history as they say. Many, many thanks to everyone involved in this project over the years. 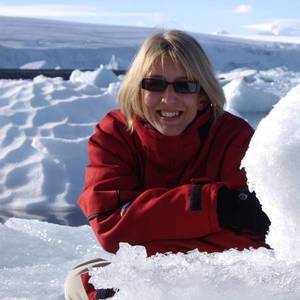