Serendipity describes discoveries made at the joint between chance and wisdom. This happened when we analysed fossil crane-fly eyes with the aim of characterizing ommochromes, only to find that the reason why these features are preserved is because they contain a biochrome that should not be there.
Johan Lindgren
Associate Professor, Lund University
Follow
Like Liked by Ruth Milne

Comparing the eyes of crane-fly fossils with those of extant species demonstrates that they contain eumelanic screening pigments and that the lenses are calcified during fossilization, with implications for interpreting optical systems in other extinct arthropods such as trilobites.

I do not know when I first heard about trilobites, but I have a vivid memory of buying an almost complete specimen (presumably of the genus Calymene) in a rock shop somewhere in The Netherlands in the mid-1980s. Many years later, during my undergraduate studies, trilobites were an integral part of the basic education in geology at Lund University, being used not only to exemplify long-term evolutionary trends, but also as handy tools for determining the relative age of sedimentary rocks from the Paleozoic Era.

Trilobites are an exceedingly diverse group of marine arthropods with a long stratigraphic range, and one of many intriguing aspects of these extinct invertebrates pertains to their conspicuous compound eyes. It has long been assumed that trilobites, contrary to all modern insects, arachnids, myriapods and crustaceans, possessed eyes with ommatidial lenses made exclusively out of solid calcite crystals. However, as shown in a paper published this week in Nature, this widely held hypothesis likely needs to be reassessed.

Fossilized arthropod compound eyes. a, Compound eye of the Middle Devonian trilobite Phacops latifrons. Height of visual surface is about 4 mm. b, Cephalic region (head) of an Eocene crane-fly, illustrating the regularly arranged hexagonal ommatidial facets of its compound eyes. Each eye is approximately 1 mm wide. Courtesy of Johan Lindgren.

We will return to the trilobites in a few moments, because this story has a completely different beginning as a study aimed at molecularly identifying one specific group of natural pigments (ommochromes) so far unknown in the rock record. Having previously worked with ancient marine vertebrates, including bony fish and secondarily aquatic reptiles, my team and I had detected traces of the pigment eumelanin in fossils many millions of years old. Since it is generally thought that arthropods use ommochromes (rather than melanins) as screening pigments in their compound eyes, our initial intention was to characterize these biochromes in their fossilized state. As model organisms, we used extraordinarily preserved crane-flies from the 54-million-year-old (earliest Eocene) Fur Formation of Denmark. The eyes in these specimens occur as distinct dark patches, which, at higher magnification, reveal a hexagonal arrangement representing the outermost ommatidial facet walls. We employed a suite of state-of-the-art techniques to examine the pigmented residues in detail. However, rather than ommochromes, the black stains proved to be dominated by eumelanin residues. To substantiate this unexpected finding, we then isolated and purified screening pigments obtained from 1,300 adult individuals of the modern tiger crane-fly, Nephrotoma suturalis, and sure enough, eumelanin was present in the corneal facet walls of these insects as well. This led us to the somewhat surprising conclusion that the main reason why crane-fly eyes are retained in the fossil record is because they contain a pigment that arthropods are not supposed to have.

But then what about the trilobites? Well, in addition to a melanic pigment shield, the fossilized crane-fly eyes also comprised calcified lenses with a structure closely matching that of trilobites. From studies of modern animals, we know that the corneal lenses in crane-flies are made chiefly from chitin (a long-chain polymer), just as in all extant arthropods. What happens during the fossilization process is that the chitinous material is replaced by calcium carbonate micro-crystals, each of which is oriented so that its c-axis is directed perpendicular to the visual surface – a condition directly comparable to that of calcified trilobite lenses. This in turn strongly implies that trilobite eyes were similar to those of modern arthropods in being primarily organic in life, thereby necessitating a reassessment of the visual capacity of these magnificent but now long gone arthropods. 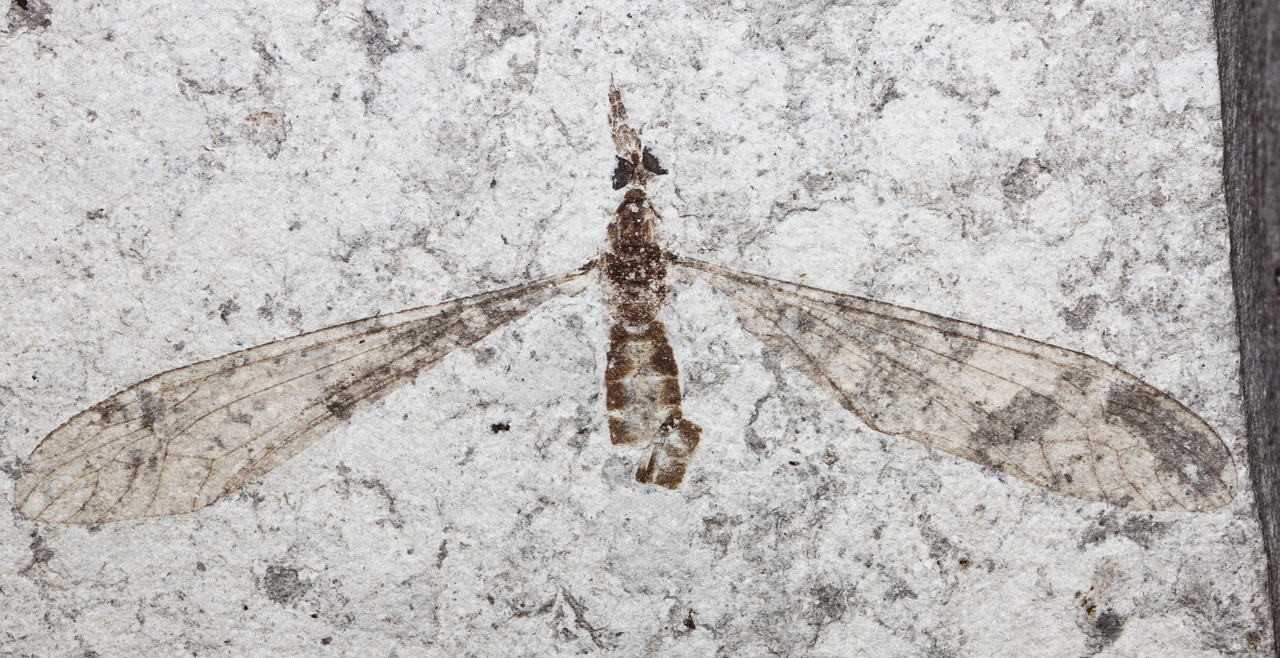 Serendipity describes discoveries made at the joint between chance and wisdom. This happened when we analysed fossil crane-fly eyes with the aim of characterizing ommochromes, only to find that the reason why these features are preserved is because they contain a biochrome that should not be there.