A noble finish: the last march of an ancient buggy worm

Yilingia spiciformis, a bilaterian dating to the Ediacaran period, is described from body fossils associated with trails produced by the animal, shedding light on the origins of segmentation and motility in bilaterian animals.

A bug is an arthropod (e.g., an insect) with a segmented body, jointed legs, and often a sclerotized or hardened integument. A worm is a long and slender soft-bodied animal, typically without limbs. A buggy worm? This was my initial impression of Yilingia spiciformis, a ~550-million-year-old animal recently described in Nature.

Yilingia is a fossil animal of the Ediacaran Period (roughly 635-540 million years ago). Specimens of Yilingia were unearthed from carbonate rocks of the late Ediacaran Shibantan Member in the Yangtze Gorges area of South China. These carbonate rocks were deposited in balmy shallow waters between 550 and 540 million years ago, more than twice older than the oldest dinosaurs.

Yilingia spiciformis, part and counterpart. Specimen is about 2 cm in width.

What makes Yilingia important is its preservation in carbonate rocks. Most Ediacaran macrofossils, including the famous Ediacara biota in South Australia, are preserved in sandy and silty sediments. Carbonate-hosted Ediacaran macrofossils are rare but they help us to gauge the full ecological and environmental ranges of these organisms. Our investigation of the Shibantan Member not only adds to the diversity of Ediacaran fossils, but also shows that some of them had remarkable ecological, environmental, and stratigraphic ranges (see a related study).

An unusual specimen of Yilingia is preserved with and physically connected with a trail it made just before death. This kind of trace fossils are called mortichnia or traces produced during a death march. The Shibantan mortichnium leaves no doubt that Yilingia was a mobile animal and allows us to infer the direction of movement (e.g., whether Yilingia moved forward, backward, or both directions). The mortichnium also builds a bridge to understand similar trails that are not connected with a buggy worm of Yilingia. This is critically important because, although trace fossils such as burrows, trails, and tracks are abundant in the Shibantan Member and other late Ediacaran rocks, it is often impossible to determine what animals produced them. Without this information, trace fossils offers only limited insights into early animal evolution.

Yilingia is neither the oldest segmented animal nor the oldest motile animal, but it is the oldest segmented and motile animal capable of producing long and continuous trails. As such, it has important implications for the early evolution of animal segmentation and motility. The origin of segmentated and motile animals is a monumental innovation that shaped the Earth’s surface environment. Today, mobile animals leave unmistakable footprints on Earth, both literally and metaphorically. Animals (including humans) are movers and shakers on modern Earth, in a large part due to their ability to move. However, animal motility had a modest start more than half billion years ago! 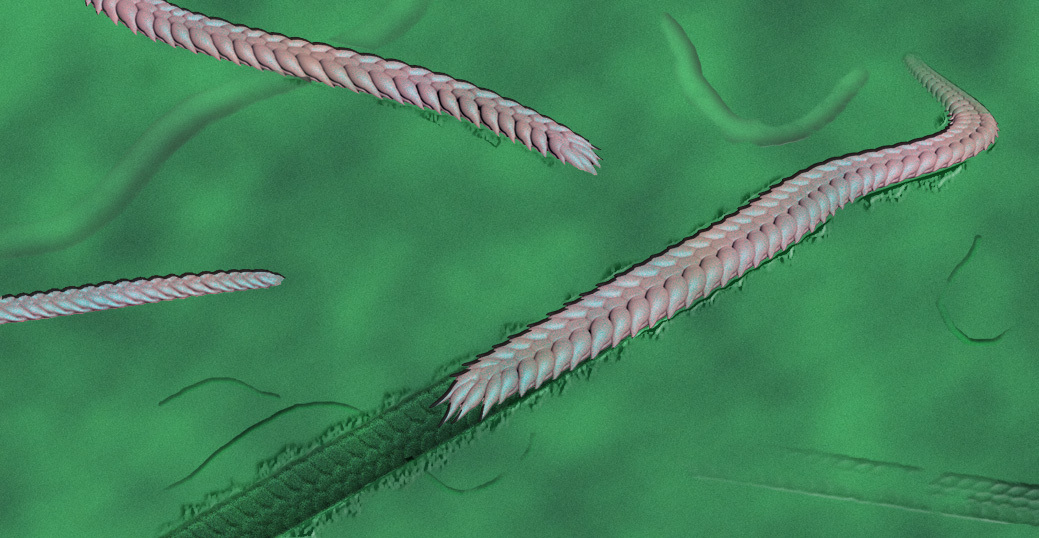 A noble finish: the last march of an ancient buggy worm

The death march of a 550-million-year-old segmented bilaterian animal sheds light on the early evolution of body segmentation and animal motility.