Chimborazo - in far-off Ecuador - the indestructible, snow-capped ‘throne of nature’ as America’s libertador Simon Bolivar termed the imposing volcano; that’s where a dashing Alexander von Humboldt formulated his vision of nature back in 1802. Having ascended that Stairway of Titans and been granted with ‘unobstructed vistas’ on past and yet-to-be eternities, everything crystalized for the young Humboldt. A detailed croquis of the mountain’s cross-section embodied all his thinking – a microcosm on one single page, mirroring how nature is a true web of life, a united whole… a global force. When drawing his ‘painting of nature’ (or Naturgemälde), Humboldt realized how he simply couldn’t just be a geologist or a botanist in order to fully grasp and comprehend all its inter-connections.

‘Zapatero a sus zapatos’ [cobler stick to your last] - an advice often given in monolithic institutions to the occasional scientist who ventures beyond his/her entrenched discipline - certainly wasn’t a call Humboldt heeded. As a true 'silo-buster', his tireless efforts to unite researchers and bridge scientific disciplines are exactly what is needed to solve today’s challenge of feeding a swelling world population, while preserving our resource base and safeguarding biodiversity. Integrative approaches are indispensable to advance sustainable or ecological intensification of the world’s farming systems, and to remediate our current over-reliance on chemical inputs. Over the past five decades both the absolute amount and the toxicity loading of synthetic pesticides has surged - outpacing that of other drivers of global change. Pesticides are now omnipresent, polluting 100% of sampled streams and 83% farm soils in Europe, feathers of 100% of Swiss sparrows, 64-85% of Europe’s marketed apples, lemons and grapefruit and even appear in 100% urine samples of Belgian children. While their farm-level use disrupts vital ecosystem services, can undermine farm profitability and is often superfluous, numerous agro-ecological innovations sit 'on the shelf' waiting to be scaled. The ‘frustratingly’ slow uptake of non-chemical measures such as insect biological control is partially ascribed to an insufficient and inadequate attention to the various technical, socio-economic and policy dimensions that surround farmers’ behavioral change. The resulting ‘One Health’ problems are severe and complex, and need to be addressed by Humboldtians – those who recognize that one simply can’t just be an insect ecologist or a plant pathologist.

EFSA 2016 records show how >60% of mangoes sold in the European Union are tainted with pesticides; in southern Mexico 50 million parasitic wasps are weekly mass-reared and released - thus permitting a pesticide-free management of fruitflies in local mango orchards (Photo: Alexandra Narvaez)

‘All Nature’s difference keeps all Nature’s peace’, so wrote the English poet Alexander Pope long before Humboldt even initiated his travels. Many farming systems are indeed richly endowed with various forms of life, comprising microbes, companion plants, frogs and lizards, birds, bats and vast numbers of invertebrates. Even the most obscure animals such as ticks occupy a unique niche, and have their own dreaded 'natural enemies'. All the above players interact and actively communicate with wafts of volatiles, sweet gifts of nectar or mesmerizing color displays; and those can’t exclusively be studied in sterile Petri dishes or behind bioinformatics dashboards… by doing so, we snatch in vein at Nature’s veil!

Instead, Humboldt saw nature as dynamic, in flux and thumping with life, an intricate clockwork that needed to be experienced ‘viscerally’ – sleeves rolled up, mud sticking to the booths and pockets filled with rocks. Only such ‘up-close-and-personal’ analysis permits a targeted manipulation of diversity both above- and below-ground and at field, farm and agro-landscape levels, and can ultimately help keep pest populations at bay, improve yield stability and mitigate myriad environmental pressures - including pesticides' carbon footprint or tropical deforestation.

Over time, farmers have come to manipulate pieces of this biodiversity puzzle, as evidenced by the millennia-old practice of weaver ant biological control in China’s citrus orchards. Yet, their increasing reliance upon chemical inputs and quick technology ‘fixes’ can lead to ‘deskilling’: up to 70% of contemporary farmers are totally unaware of beneficial pest-killing organisms or natural pest control, but do marvel at pesticide-spraying drone armies that take on ‘monster’ caterpillars. Two-way engagement between scientists and farmers - often facilitated through drawings (though no paintings!) of farm ecosystems - can be an entry-point for validating diversification measures, jointly discovering ecosystem services and valuing their economic benefits at relevant scales of farm operation. Keeping these two worlds tightly linked will prevent a further alienation or rift in human’s metabolic interaction or Stoffwechsel with nature, wrote Karl Marx – another contemporary of Humboldt – 150 years ago in Das Kapital.

Interdisciplinarity surely is the central pivot. Agronomic decisions though are routinely made in a reductionist fashion, keying in on one part of the system while neglecting others. Overuse of synthetic fertilizer - a practice that was already criticized in the 1800s by Justus von Liebig, 'father of the organic chemistry' and Humboldt’s mentee - is often motivated by farmers’ desire to maximize yield. Yet, it can improve plants’ suitability to herbivorous insects, favor pest outbreaks and ultimately trigger insecticide sprays. This in turn harms a variety of beneficial insects and undercuts the cost-free service of biological control. In settings with decayed ecosystem services, particular farming regimes thus easily enforce a ‘pesticide treadmill’. Those dependencies are further deepened by agro-chemical suppliers, who are influential for both their knowledge and cash loans for chemical inputs, or by national policies that are either unclear or contradictory, ineffective or solely aimed at replacing one chemical input with another. Escaping this 'pesticide lock-in' requires a trans-disciplinary approach that tackles both private- and public-stakeholder relationships, consumer awareness about healthy and pesticide-free farm produce, insurance schemes that ease farmers' transitions towards sound alternatives, outcome-oriented policies to incentivize an active protection of ecosystem services, and a complete overhaul of pesticide regulations.

Ecosystem management is interwoven with a thousand threads, and Humboldt even followed some into the realms of economics. In today's globalized world, on-farm decisions and resulting ecosystem alterations are dictated by volatile shifts in policies, pricing or demand of certain commodities. Globe-spanning trade, as Humboldt, Marx and Liebig all recognized in the 19th century, can easily squander the vitality of the soil, enlarge environmental footprints and aggravate human's 'metabolic rift' with nature. On the other hand, agriculture-related damages to the environment and human health are not reflected in the accounting systems of prevailing economic and policy systems, while the stabilizing effects of on-farm biodiversity on commodity markets and global trade or the $300 million-worth fortune ladybugs bring to China's cotton farmers are equally overlooked. All these social and environmental externalities are to be duly inserted into economic systems by evaluating their comprehensive costs and benefits, as recently proposed by UN-Environment.

When painting the future of agro-ecology and sustainable food systems, our palette definitely cannot be monochromatic (Photo: openspacefengshui.com)

Insects are at the core of many of today’s sustainable development challenges. They don’t only brighten entomologists’ minds or intrigue world leaders but can equally help build connections -as spokes in a wheel- to other disciplines, thus extending one's reach to new drawers with different colors. If there’s one thing we can learn from Humboldt’s immense legacy, that’s when painting the future of global agriculture and environmental sustainability, our palette surely can’t be monochromatic.

I am astonished by the detailed references provided in the text, there’s no doubt that this is an excellent article on the application of Humboldt’s mind on agriculture. Thanks for sharing!

Kris A.G. Wyckhuys
about 3 years ago

Thank you very much for this praise, Jianguo!

A. Ortega
about 3 years ago

Great article!!! It reminded me of the book Farmers of forty centuries, by Franklin Hiram King that I am reading right now. This book describes a real, sustainable agriculture supported by China, Korea and Japan. It also came to my mind that in my uni back in Colombia, instead of using pesticides, we used  "coriander fences" to avoid ants eating the plants for our genetic experiments. I hope we could implement our re-discovered methods, such as the ones in the book and the biological controls you explain, in our modern agriculture.

Kris A.G. Wyckhuys
about 3 years ago

Thanks, Alejandra! A great source of inspiration for me -on Humboldt's life and work- was Andrea Wulf's 'The invention of Nature'. And yes, lots of excellent developments in Colombia by the national center AgroSavia (or former Corpoica) but also exciting progress at the various universities.  As we say - adelante!

Alejandra Arce Indacochea
about 3 years ago

Thank you for articulating our deep and intrinsic connections so beautifully. And for reminding us of our collective and scientific history and legacy by drawing from the world´s diverse cultures and incredible thinkers. The biggest lock-in, speaking from the Peruvian context, has been public and private institutions that function as monoliths, do not articulate and cross-pollinate each other, and rampant consumerist culture. Changing this mental "chip" in favor of agro-ecological management and local food systems is a long-term challenge. Alas, we will keep on keeping on! 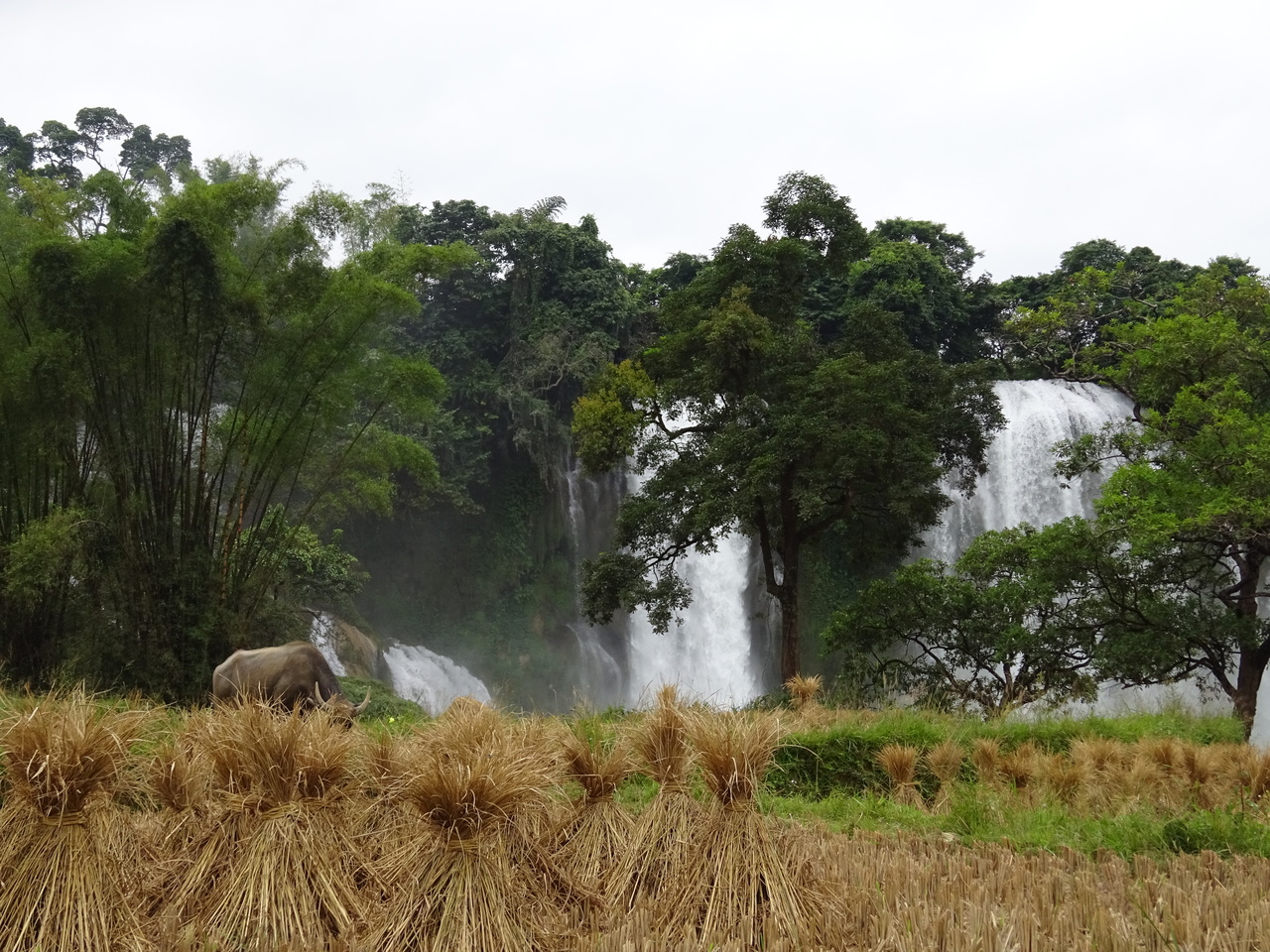